The Tribunal, via the impugned order, has in turn set aside two separate but similar orders dated 28.03.2019, passed by the Principal Commissioner of Income Tax [in short “PCIT”] in the exercise of his powers under Section 263 of the Income Tax Act, 1961 [in short “Act”]

According to us, the AO, having received a response to his query about the adjustment of interest, in the concerned AYs, against inventory, concluded that, there was a nexus between the receipt of funds from investors located abroad and the real estate project, which upon being invested generated interest. Thus, it cannot be said that the conclusion arrived by the AO, that such
adjustment was permissible in law, was erroneous.

Related Topic:
Delhi HC in the case of Insitel Services Pvt. Ltd. Versus Union of India

Related Topic:
Delhi HC in the case of Lupita Saluja Versus DGGI

Furthermore, in our view, we need not detain ourselves and examine as to whether Clause (a) and (b) of Explanation 2 appended to Section 263 of the Act could have been applied to the AYs in issue, since on facts, it has been found by the Tribunal that an enquiry was, indeed, conducted by the AO.

Thus, for the foregoing reasons, the above-captioned appeals are dismissed as, according to us, no substantial question of law arises for our consideration.

Related Topic:
Delhi HC in the case of Arise India Limited Versus Commissioner of Trade & Taxes

There shall, however, be no order as to costs. 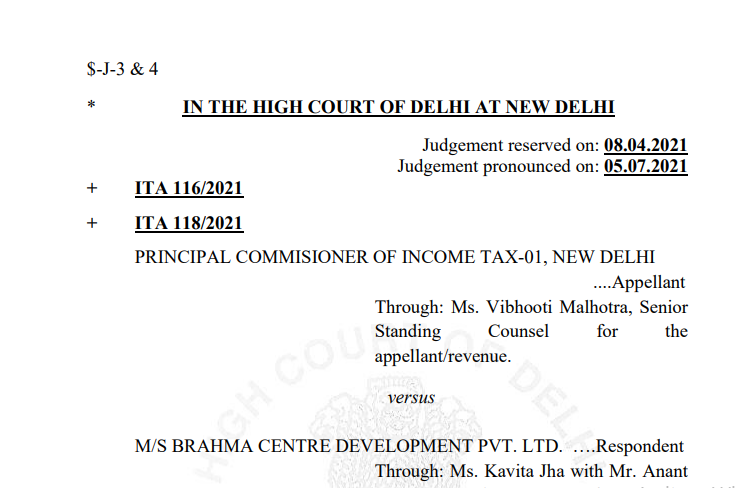 
EXPORT UNDER LUT BY MERCHANT EXPORTER UNDER LUT