The present petition has been filed under section 438 Cr.P.C. seeking anticipatory bail to the petitioner in relation to the inquiry/investigation being conducted by the respondent under Central Goods & Service Tax Act, 2017.

The case of the prosecution against the petitioner herein is that the applicant and her husband created five bogus export firms, namely, M/s Atlantic International Trading Pvt. Ltd, M/s Blue Star International Pvt. Ltd M/s Sun Flame Trading Pvt. Ltd., M/s Blue Evolution Pvt. Ltd and M/s White Mountain Trading Pvt. Ltd. and fraudulently availed ITC of Rs.45 crores upon the strength of fake invoices providing fabricated information on E-way bill portal. On inquiry, it is found that all their suppliers were either non-existent at the declared principal place or the business address given in the GST registration. Moreover, none of the transporters have transported the good for the companies in question, however, only one transporter disclosed that he transported the goods from a warehouse to ICD TKD and not from any of the suppliers as claimed by the husband of the applicant in his statement dated 17.11.2020 recorded u/s 70 & 174 of CGST Act. The applicant and her husband are active directors of the abovementioned five companies and were well aware of all the tax-related dealings of the companies. The applicant in her voluntary statement dated 10.12.2020 has stated that she signed all the financial documents regarding day to day work of these firms. However, during the investigation, it has been revealed that the applicant was drawing an annual salary of Rs.7,20,000/- whereas her husband was drawing an annual salary of Rs.6,00,000/-. The applicant has received approximately Rs.279 crores from her companies accounts in her personal savings account maintained in Indusind Bank and Rs.5.79 crores in her bank account maintained in ICICI Bank.

In view of the above facts, I am of the view that custodial interrogation of the applicant is not required.

Accordingly, the Arresting Officer is directed that in the event of arrest, the petitioner/applicant shall be released on her furnishing a personal bond in the sum of Rs.25,000/-.

The petitioner shall cooperate with the investigation and make herself available for interrogation by the police officer, as and when required.

She shall not directly or indirectly influence any witness or tamper with the evidence.

It is made clear that the Trial Court shall not get influenced by the observation made by this Court while passing the order.

The petition is, accordingly, allowed and disposed of.

Copy of this order be transmitted to SHO/IO for information and necessary compliance. 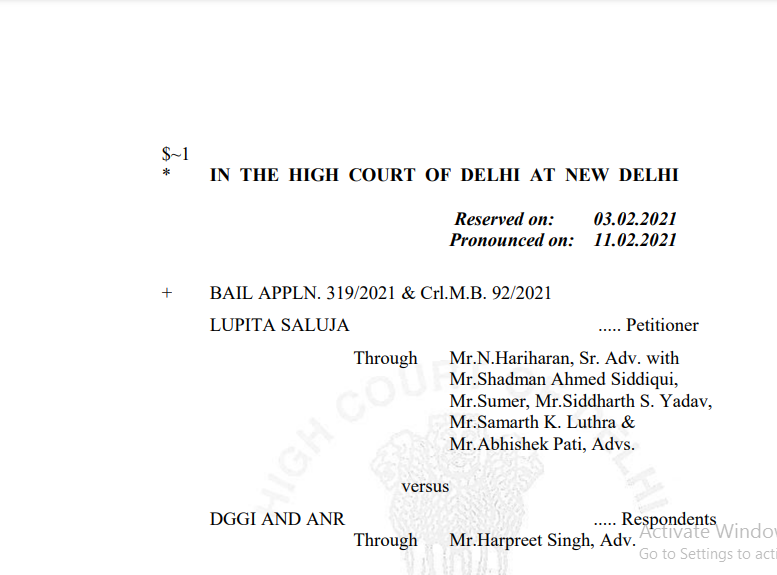