This is an application filed by the petitioner to seek a stay on the investigation for the reasons articulated therein. On 22.02.2021, the writ petition came up for hearing for the first time before this Court. A perusal of the said order shows that one of the issues which the Court had flagged was that issues raised in the instant writ petition overlapped with issues that had been raised by the petitioner in the writ petition filed before the Allahabad High Court.

Therefore, the Court had indicated to the learned counsel for the parties, on that date, that the best course of action, perhaps, would be that the petitioner be relegated to the Allahabad High Court.

It is in this context, the Court had called upon the learned counsel for the respondents, to take instructions, as to whether the respondents would raise an objection before the Allahabad High Court, on the ground of territoriality. Although Mr. Ravi Prakash, who appeared on behalf of the respondents, on that date, had indicated that there should be no objection on that score, however, by way of abundant caution, he sought time to take instructions qua the factual aspects of the case and, if necessary, to file a response.

The Court had accordingly, granted four weeks’ time to Mr. Ravi Prakash to file a counter-affidavit in the matter. Concededly, four weeks have not expired. The petitioner, has, however, approached this Court to stave off coercive actions undertaken by the respondents with the renewed vigour since the notice was issued in the writ petition.

A perusal of the circular is suggestive of the fact that once the Gautam Budh Commissionerate had taken steps to investigate the petitioner, the other Intelligence Units should have held their hands; an approach which is both sensible and practical. The submission made by Mr. Prakash that there is a difference in the subject matter, and, therefore, other units can also investigate, to our minds, at this juncture, does not impress us.

The Decision of the Hon’ble Court:

Therefore, while we are inclined to give time to the respondents to file their reply to the captioned application within the next two weeks, for the moment, no coercive measures will be taken against the petitioner. If in the interregnum, the investigation is necessitated, in line with the circular dated 05.10.2018, it shall be carried out only by the Gautam Budh Nagar Commissionerate. The search officers will ensure that there is no invasion of privacy. 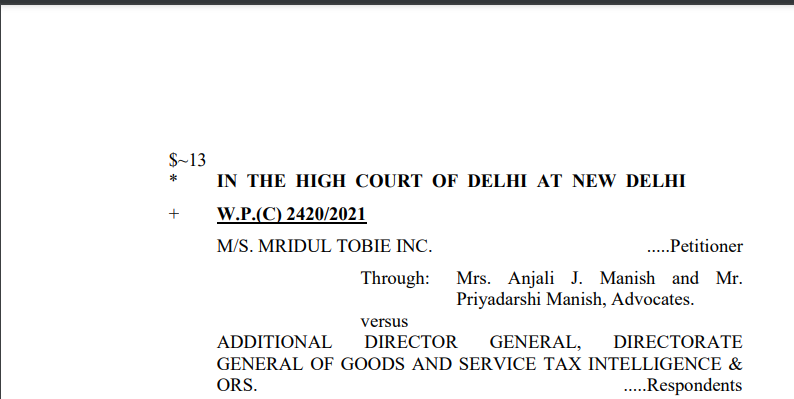