On 31.03.2018, which was the last date on which the limitation was to expire, a notice under Section 148 of the Act was issued by respondent no.1, wherein respondent no.1 inter alia stated that he had reason to believe that income chargeable to tax qua AY 2011-2012 had escaped assessment within the meaning of Section 147 of the Act. Accordingly, the assessee was directed to file a return in the prescribed form for the said AY as respondent no.1 proposed to assess/re-assess the income/loss for the concerned AY.

Related Topic:
Delhi HC in the case of SKH Sheet Metals Components Versus Union of India

Although Mr. Singh did argue that the assessee should be relegated to statutory remedies, in our view, a case is made out for interference at this stage itself. According to us, relegating a party to an alternative remedy is a self-imposed limitation which, however, does not denude the court of its powers under Article 226. The Court is duty-bound to exercise its powers under Article 226 where ever it finds that a statutory authority has exercised its jurisdiction either irregularly or acted in a matter in which it had no jurisdiction or committed a breach of the principles of natural justice.

Before we conclude, we must also indicate that the order recording reasons neither discusses the contents of the report received from the investigation wing or the statements made by Mr. Pradeep Kumar Jindal and his associates. The order recording reasons, merely, indicates that the formation of belief is based on these sources. Furthermore, although, there is a reference to Shri Laxman Singh Satyapal and Ms. Meera Mishra in paragraph 3.14 of the counter-affidavit, as persons, whose statements were also recorded during the search, which formed the basis of initiation of proceedings under Section 147 of the Act, there is no reference to them in the order recording reasons.

Besides this, the revenue has taken the position that not only the report of the investigation wing but also the statements of Mr. Pradeep Kumar Jindal and his aforementioned associates were furnished to the authorized representative of the assessee in the proceedings held before respondent no.1 on 12.10.2018 (See para 3.6 of the counter-affidavit). The proceedings sheet of 12.10.2018 [which is appended with the counter-affidavit] does not refer to this fact. Therefore, apart from anything else, a case could have been made out also of breach of principles of natural justice. For the reasons best known, Mr. Kochar did not press this issue. We need not elaborate any further on this aspect of the matter as our decision does not turn on whether or not there has been a breach of principles of natural justice.

Thus, for the foregoing reasons, we are inclined to quash the impugned notice dated 31.03.2018 issued under Section 148 of the Act as well as the order granting sanction issued by respondent no.2. It is ordered accordingly. Parties will bear their own cost.

The case papers shall stand consigned to record. 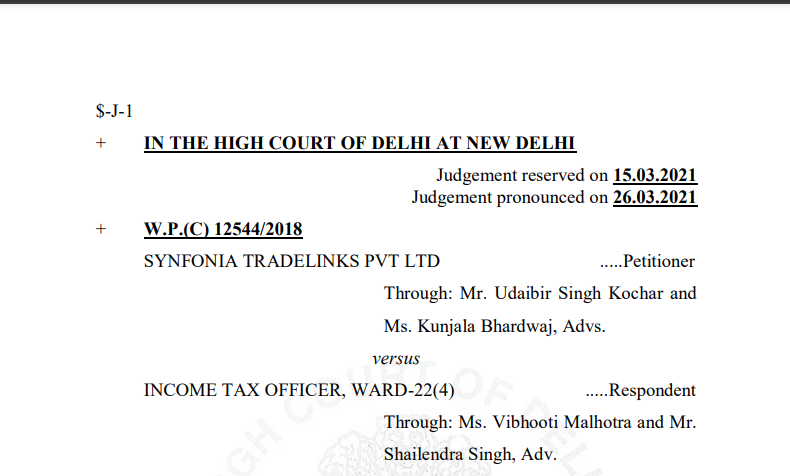