The said petition has been filed by the petitioner challenging the instructions dated 22.05.2019, addressed by respondent no. 4 to respondent no. 3, advising that all services, whether Engineering Services (Network Engineering Services, Management, and Operation of Network Services (Managed Services) in Telecom Sector or Management Consulting Services) in Telecom Sector, are ineligible for the benefit under the Service Exports from India Scheme (hereinafter referred to as ‘SEIS’) announced by the Foreign Trade Policy 2015-20. The petition further impugns the order(s) dated 11.06.2019 and 03.06.2019, whereby respondent no. 3 has rejected the claim of the petitioner(s) for benefit under the SEIS for the financial years 2015-16, 2016-17, and 2017-18, respectively.

Following the above, it is held that in the facts of the case, where the impugned Instructions/Circular dated 22.05.2019 has been issued under the instructions of the DGFT itself, the remedy of appeal under Section 15 of the Act would clearly be otiose and redundant. As far as the remedy under Section 16 of the Act is concerned, once it is held that the Impugned Orders have been passed on the basis of Instructions which are otherwise ultra vires the Act, the petitioner cannot be denied the benefit of an original adjudication on merits and the decision on an appeal under Section 15 of the Act in accordance with the law, and be relegated only to a remedy of review.

In view of the above, the Impugned Instructions and Order(s) are set aside. The respondents are directed to consider the claims of the petitioner(s) under the SEIS afresh and in accordance with FTP 2015-20.

The petitions are allowed in the above terms and directions. There shall be no order as to costs. 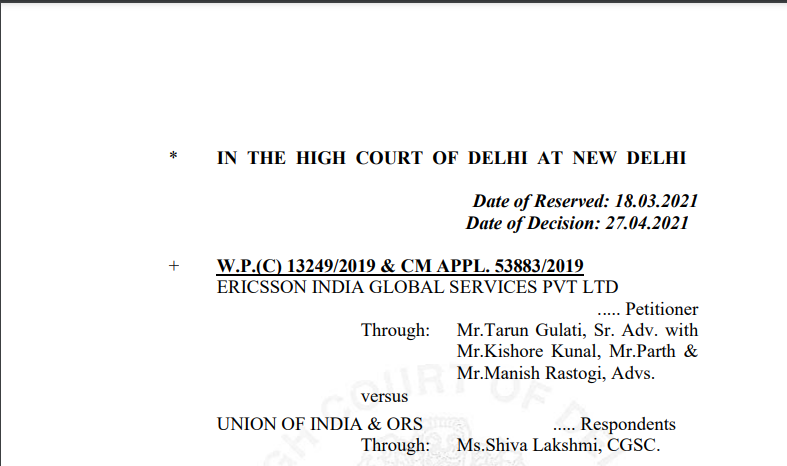 Tagged with: Delhi HC in the case of Ericsson India Global Services Pvt Ltd Versus Union of India
Discuss Now Opinions & information presented by ConsultEase Members are their own.