The singular grievance of the petitioner in the instant case is that despite the fact that the amount to be refunded as determined by the Revenue in October 2019, the amount, so determined, has not been remitted, as yet.

Interestingly, the order determining the refund is dated 02.10.2019. We have asked Mr. Kunal Sharma, who appears for the Revenue, as to how that date was endorsed on the order. His candid reply was that although he was not aware as to why the said order bore 02.10.2019 as the date, there was no dispute about the genuineness of the order.

The Revenue has brought nothing on record to show that an order under Section 241A of the Act has been issued. As a matter of fact, no counter-affidavit has been filed by the Revenue.

Therefore, the mandate of the law requires the Revenue to remit the amount determined in its order dated 02.10.2019 to the petitioner along with interest as required under the provisions of the Act. This is also the view of the coordinate Benches of this Court taken in Maple Logistics and Ericsson India Pvt. Ltd. (Supra)

Before we part, we may also indicate that prior to the A.O. passing an order under Section 241A of the Act, it may possibly be a constructive approach if the assessee is heard. There are several cases where assessees‟ are looking for liquidity in the form of money received via refund and even if the A.O. is of the view that release of refund is likely to adversely affect the interests of the Revenue, the Revenue could, in a given case, take security in the form of bank guarantee or other solvent security as deemed fit and thus, in a sense, balance the interests of both the assessee and the
Revenue. We have only given one illustration, there could be several situations of like nature and therefore, perhaps hearing the assessee at some stage, either before or after, the A.O. may help in resolving such disputes.

The writ petition is, accordingly, allowed. The Revenue is directed to remit the amount as determined in the order dated 02.10.2019 along with requisite interest as payable under the extant provisions of the Act. The payment determined shall be released within 10 days from the date of receipt of a copy of this judgement.

Pending application(s), if any, shall stand closed. 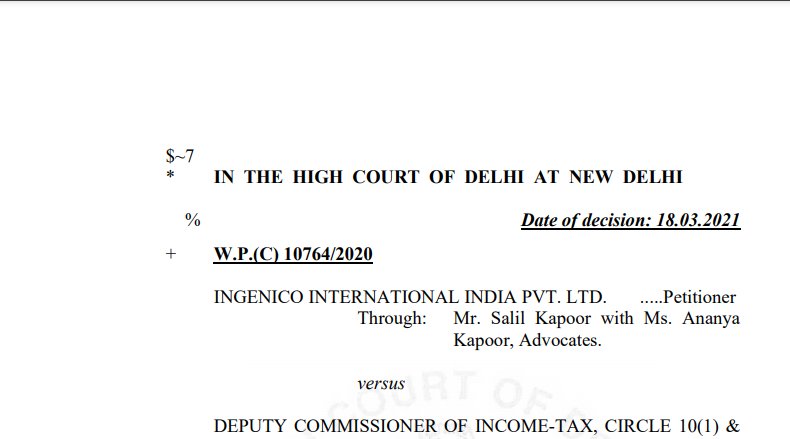 Tagged with: Delhi HC in the case of Ingenico International India Pvt. Ltd Versus Deputy Commissioner of Income-Tax
Discuss Now Opinions & information presented by ConsultEase Members are their own.