The present writ petition has been filed challenging the assessment order dated 01st June 2021. Petitioner has also sought sufficient time in future to file a reply after considering the lockdown position in U.P. and NCT of Delhi as well as the fact that the Petitioner-Company is represented by a Resolution Professional who is an independent professional and is dependent upon the past employees of the Petitioner-Company to file its response.

On the first date of hearing, i.e. 11th June 2021, learned counsel for the Petitioner had stated that the Petitioner on 31st May 2021 at around 02:00 p.m. had asked for an adjournment and extension of time to submit his reply citing the reason that the Resolution Professional of the Petitioner was unable to access the records of the Petitioner-Company due to various lockdown restrictions imposed by the State of Uttar Pradesh.

Keeping in view the aforesaid controversy, this Court is of the view that the matter is serious in nature as one of the parties have either forged the document in question and/or is not telling a complete truth. The respondent’s (DCIT, CC-06) offer to now ascertain the source of the email from the Directorate of Systems, who is having control over all income tax systems is too late in the day. Any reasonable official would have conducted the said inquiry before filing his counter-affidavit and before making a serious allegation of perjury and forgery, even if prima facie, against the deponent of the writ petition. Consequently, in the opinion of this Court, the said offer of DCIT, CC-06 lacks bonafides.

Related Topic:
Delhi HC in the case of Insitel Services Pvt. Ltd. Versus Union of India

Moreover, as the allegation pertains to a sensitive server belonging to the Ministry of Finance/Department of Income Tax and involves a senior official of the Income Tax Department holding a sensitive post, this Court directs the Central agency, namely the Central Bureau of Investigation (CBI) to enquire as to whether the email dated 31st May 2021 (Annexure P-4) had been issued to the petitioner or not, and if so, by whom. The CBI shall file its inquiry report with this Court within four weeks. The Deponent of the writ petition and the counter affidavit are also directed to cooperate with the officials of the CBI. The registry is also directed to forward a copy of this order along with the entire paper book to the Director, CBI, on or before 20th 2021, who in turn, is directed to nominate an officer to conduct the inquiry.

Related Topic:
Delhi HC in the case of Arise India Limited Versus Commissioner of Trade & Taxes

The order is uploaded on the website forthwith. Copy of the order be also forwarded to the learned counsel through e-mail. 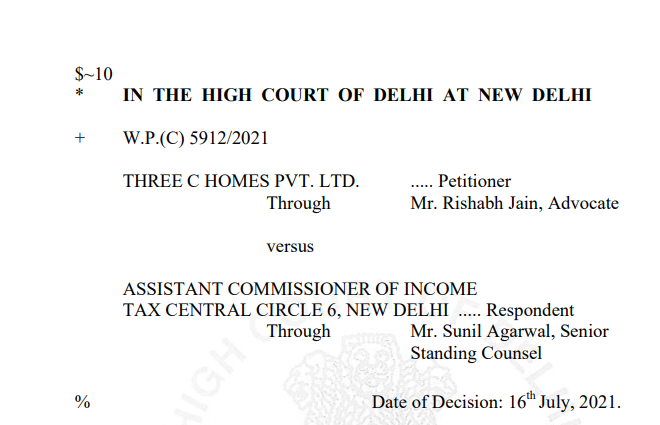 Related Topic:
Delhi HC in the case of Lupita Saluja Versus DGGI