SCT is a charitable trust organization registered under the DVAT Act. It is engaged in the activity of providing food items in the Akshardham Temple complex. It states that it has paid Value Added Tax (“VAT‟) on its purchases. It avails Input Tax Credit (“ITC‟) on the VAT paid on its sales. SCT states that it has made purchases from selling dealers registered under the DVAT Act on the strength of tax invoices which prove the collection of tax by the vendor from the purchasing dealer and is a valid document for availing ITC.

SCT states that on 1st June 2012, a fire broke out in the premises of the one of selling dealers – M/s. Vidya Polymers. The report of the Delhi Fire Service and the First Information Report (“FIR‟) lodged with the Station House Officer (“SHO‟), Ashok Vihar Police Station are relied upon by SCT in support of this contention. It is stated that on account of said fire and destruction of records, M/s. Vidya Polymers failed to deposit the VAT collected from its buyers, which included SCT.

In the present case, the conditions imposed for the grant of ITC are spelled out in Sections 9 (1) and (2) of the DVAT Act and have been adverted to earlier. The claim of the purchasing dealer in the present case is not that it should be granted that ITC dehors the conditions. Their positive case is that each of them, as a purchasing dealer, has complied with the conditions as stipulated in Section 9 and therefore, cannot be denied ITC because only the selling dealer had failed to fulfill the conditions thereunder. More importantly, the Court finds that there is no provision in the MVAT Act similar to Section 40A of the DVAT Act. Section 40A of the DVAT Act takes care of a situation where the selling dealer and the purchasing dealer act in collusion with a view to defrauding the Revenue. In fact, the operative directions in Mahalaxmi Cotton Ginning Pressing and Oil Industries (supra) indicate that such a measure was suggested by the State Government itself to go after defaulters, i.e. selling dealers failing to actually pay the tax. The Department there undertook to upload on its website the details of the defaulting dealers. It was further undertaken that once there was a final recovery of the tax from the selling dealer, a refund would be granted to the purchasing dealer.

In light of the above legal position, the Court hereby holds that the expression „dealer or class of dealers‟ occurring in Section 9 (2) (g) of the DVAT Act should be interpreted as not including a purchasing dealer who has bona fide entered into purchase transactions with validly registered selling dealers who have issued tax invoices in accordance with Section 50 of the Act where there is no mismatch of the transactions in Annexures 2A and 2B. Unless the expression „dealer or class of dealers‟ in Section 9 (2) (g) is „read down‟ in the above manner, the entire provision would have to be held to be violative of Article 14 of the Constitution.

Resultantly, the default assessment orders of tax, interest, and penalty issued under Sections 32 and 33 of the DVAT Act, and the orders of the OHA and Appellate Tribunal insofar as they create and affirm demands created against the Petitioner purchasing dealers by invoking Section 9 (2) (g) of the DVAT Act for the default of the selling dealer, and which have been challenged in each of the petitions, are hereby set aside.

The writ petitions and applications are disposed of in the above terms but, in the circumstances, with no orders as to costs. 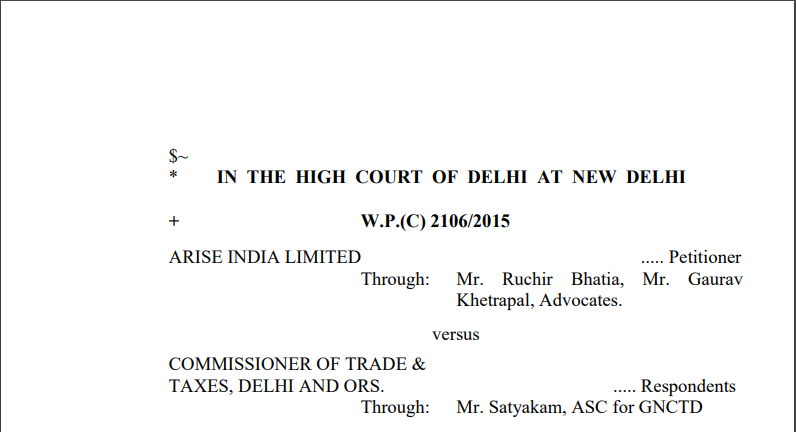