1. M/s Milkfood Limited is at the center of this network and has availed huge ITC from firms that have been proved to be fictitious and non-existent during the investigation carried out by the petitioner.

2. It is alleged that the preliminary investigations have revealed that M/s Milkfood Ltd. has availed fake ITC of ₹ 54.86 crores from M/s Maya Impex, M/s Aditya Sales, M/s Shiv Muskaan Traders, and M/s Shri Nidhivan Foods which were being operated by one Sh. Ashish Aggarwal.

1. Respondents have joined the investigation pursuant to the summons issued by the department

2. Ashish Aggarwal who has been stated to be the mastermind and beneficiary was granted regular bail vide order dated 14.11.2020

3. Petitioner had also moved a petition seeking cancellation of bail granted to Ashish Aggarwal but vide order dated 16.03.2021 the same was dismissed.

1. Ignoring the statements of the respondents about the vital aspects of the matter, the impugned order dated 24.11.2020 was passed, whereby the respondents were granted the benefit of anticipatory bail upon the condition of deposit of 10% of the alleged duty evasion amount.

1. It is settled that once bail granted should not be canceled in a mechanical manner without there being any supervening circumstances that are not conducive to a fair trial.

2. Respondents have joined the investigation and there are no allegations that they have not co-operated in the said investigation

4. There are no allegations of any tampering or influencing of the witnesses.

5. There are also no allegations that the respondents are a flight risk or there is any likelihood of their absconding

6. Three Judges Bench of Hon’ble the Supreme Court in State (Delhi Administration) vs. Sanjay Gandhi 1978 (2) SCC 411 has made the following elemental distinction in defining the nature of exercise while canceling bail:

“Rejection of bail when bail is applied for is one thing; cancellation of bail already granted is quite another. It is easier to reject a bail application in a non-bailable case than to cancel a bail already granted in such a case. Cancellation of bail necessarily involves the review of a decision already made and can by and large be permitted only if, by reason of supervening circumstances, it would be no longer conducive to a fair trial to allow the accused to retain his freedom during the trial.”

7. Hon’ble Supreme Court in Dolat Ram v. the State of Haryana (1995) 1 SCC 349 has also laid down guidelines to Courts while deciding the question of cancellation of bail already granted.

“4. Rejection of bail in a non-bailable case at the initial stage and the cancellation of bail so granted, have to be considered and dealt with on a different basis. Very cogent and overwhelming circumstances are necessary for an order directing the cancellation of the bail, already granted. Generally speaking, the grounds for cancellation of bail, broadly (illustrative and not exhaustive) are: interference or attempt to interfere with the due course of administration of justice or evasion or attempt to evade the due course of justice or abuse of the concession granted to the accused in any manner… However, bail once granted should not be canceled in a mechanical manner without considering whether any supervening circumstances have rendered it no longer conducive to a fair trial to allow the accused to retain his freedom by enjoying the concession of bail during the trial. These principles, it appears, were lost sight of by the High Court when it decided to cancel the bail, already granted. The High Court it appears to us overlooked the distinction of the factors relevant for rejecting bail in a non-bailable case in the first instance and the cancellation of bail already granted.”

8. Relying upon the judgments State (Delhi Administration) vs. Sanjay Gandhi (supra) & Dolat Ram v. State of Haryana (supra) and also that all the facts and circumstances, required for an order of cancellation of bail to be passed are missing in the present case, the petition is dismissed. 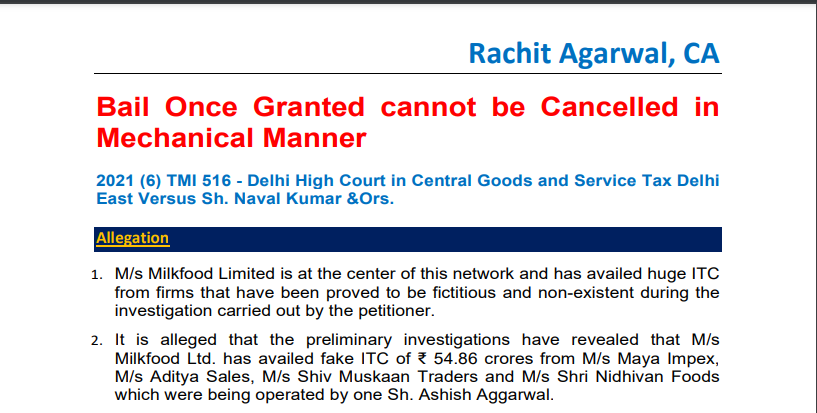