The present petition was heard on 21st December 2020 along with other batch matters relating to difficulties faced by taxpayers in filing form GST TRAN-1 (hereinafter “TRAN-1 Form”). However, considering that the issue involved in the present petition is slightly different as compared to the other batch matters, it is being decided separately by way of this judgment.

a) “you have not declared anything in Part 7B of table 7(a) of TRAN-1, so you are not permitted to fill any details in table 4 of TRAN-2.

b) you have not declared anything in table 7(d) of TRAN-1, so you are not permitted to fill any details in table 5 of TRAN-2”

On the same date, the Petitioner informed GSTN about the nonacceptance of TRAN-2 Form via email, however, no response has been received till date.

As can be seen from the aforesaid decisions, this Court has held that inadvertent and genuine mistakes in filling up the correct details of credit in TRAN-1 Form should not preclude taxpayers from having claims examined by the authorities in accordance with the law. This Court has consistently been issuing directions to the Respondents and granting relief to such taxpayers. When the Petitioner attempted to upload TRAN-2 Form, it was prevented to do so because of the error committed by him while making the declaration in the TRAN-1 Form, however, the system did not enable the Petitioner to revise TRAN-1 Form on the system. In Blue Bird Pure (supra), this Court had, in fact, observed that the Respondents ought to have provided a facility in the system itself for rectification of errors which are clearly bona fide. Further, the Court had also noticed that although the system provided for revision of a return, the deadline for making the revision coincided with the last date for filing the return i.e., 27th December 2017, rendering such facility to be impractical and meaningless.

In this view of the matter, we see no reason to deny the Petitioner the relief as sought for in the petition. Accordingly, the petition is allowed, and we direct the Respondents to either open the online portal so as to enable the Petitioner to file the rectified TRAN-1 Form electronically or accept the same manually with necessary corrections, on or before 30th June 2021. The Petitioner will thereafter be permitted to correspondingly file the TRAN-2 Form which also shall be accepted either electronically by opening the online portal, or manually.

The petition is disposed of in the above terms. 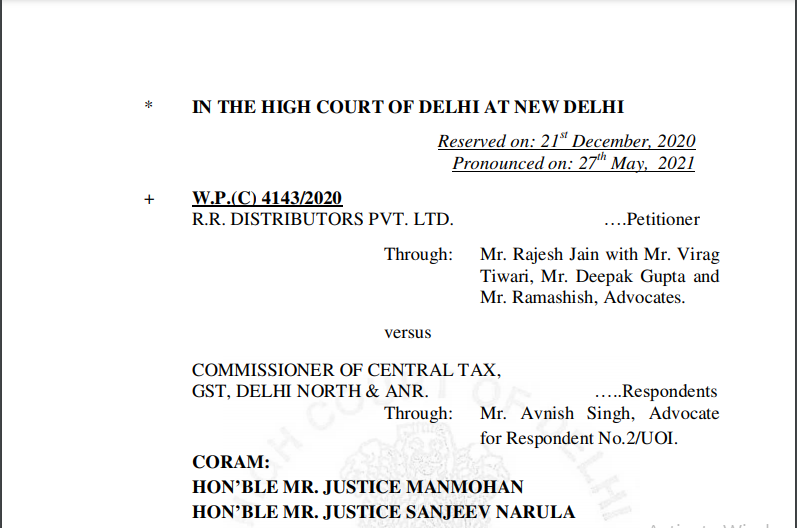 Features of Various Credit Schemes Available for MSMEs and How to Apply for Them?

Concept Paper On All about Fair Value: ICAI

Patna HC in the case of Pankaj Sharma V/s UOI