The petitioner, claiming to represent the interest of more than 50 small scale ice cream manufacturing units operating in the National Capital Territory of Delhi, has filed this petition impugning the decision dated 18th June 2017 of the Goods and Services Tax Council (GST Council), in the exercise of powers under Section 10(2)(e) of the Central Goods & Services Tax Act, 2017, of exclusion of ice cream from the benefits of Composition Scheme under Section 10 of the Act. It is the contention of the petitioner that the said exclusion is in violation of the spirit of Articles 14 and 19 of the Constitution of India and against the principles of natural justice.

At least from the minutes of the two meetings placed before us, it does not appear so.

The counsel for the respondents contends that besides the tax effect, several other factors including socio-political weight and are taken into consideration in taking such decisions.

We, in the circumstances, are of the view that the only direction which can be issued in this petition is, to direct respondent no.2 GST Council to reconsider the exclusion of small scale manufactures of ice cream from the benefit of Section 10(1) of the Act, including on the aforesaid two parameters i.e. the components used in the ice cream and the GST payable thereon and other similar goods having similar tax effect continuing to enjoy the benefit. We direct accordingly.

The respondent no.2 GST Council to take up the aforesaid aspect in its next meeting and to take a decision thereon at the earliest, keeping in view that the ice cream season has just begun, and preferably within three months of today.

The petition is disposed of. 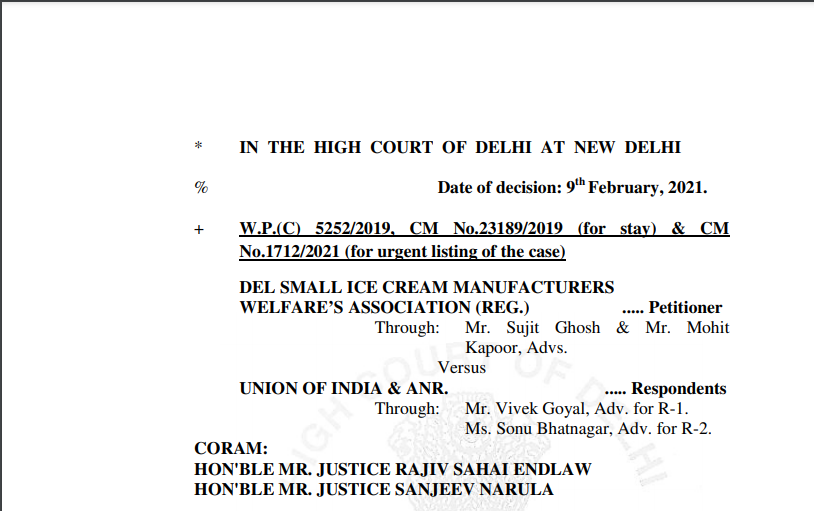