The Deputy Director, The Directorate of Enforcement

First Leasing Company of India Limited (in short “FLCI”) was a company incorporated under the Companies Act, 1956 and was into the business of giving industrial finance. Of course, it is under liquidation now.

The Chairman of FLCI was one A.C.Muthiah, a leading industrialist, who has major stakes in SPIC and other established industrial houses. One Farouk Irani is said to have joined FLCI in 1973 and became its Managing Director in 1982. One Dilliraj was the Vice President of FLCI during 2006 – 2007. One Sivaramakrishnan was the Chief Financial Officer of FLCI from 2008 to 2014.

Things were going fine for FLCI until the State Bank of India (SBI) sanctioned a working capital credit limit of Rs.20 crores on 08.02.2005, followed by the IDBI Bank, which also gave a working capital facility for Rs.18 crores by a sanction letter dated 17.08.2005. These banks extended financial assistance to FLCI from time to time.

While so, the SBI formed a consortium of banks that had lent monies to FLCI. Sometime in the year 2007, the Reserve Bank of India (RBI) conducted an inspection of FLCI and observed serious irregularities and diversion of funds to 15 satellite companies. When this news became public, things started hotting up for FLCI and they were not able to repay their lenders, resulting in their account becoming ‘Non-Performing Asset’ (NPA) in the year 2013.

As the investigation into the financial health of FLCI was being probed by the Chartered Accountants of the consortium banks, a lot of skeletons started coming from and out of the cupboard, which resulted in the Deputy General Manager, IDBI Bank, preferring a complaint to the CBI, pursuant to which, the CBI registered an FIR in Crime No.6 of 2015 on 21.09.2015 for the offenses under Sections 120-B read with 420, 467, 468, 471 and 477-A IPC against A.C.Muthiah (A1), Farouk Irani (A2), Dilli Raj (A3), Sivaramakrishnan (A4), FLCI (A5), Sarathy & Balu, Chartered Accountants (A6) and M.K.Dandekar & Co., Chartered Accountants (A7) and an investigation was taken up by the Bank Security and Fraud Cell of the CBI.

Concededly, Dilliraj (A.1) left the services of FLCI way back in the year 2007 and the salaries drawn by him from 1996 to 2007 can, by no stretch of the imagination, be construed as proceeds of crime. Even in the complaint, it is stated that the working capital loan amounts that were given by various banks based on the hyped-up financial statements of the company were diverted to 15 shell companies floated by FLCI and into the kitty of Farouk Irani and his family members. Thus, when the proceeds of crime had gone into the hands of fictitious companies that were floated for this purpose, there cannot be a further flow of the proceeds of crime into the account of Dilliraj (A.1) as salaries and perquisites. Though it is true that Dilliraj (A.1) is facing the music in the prosecutions that have been launched by the CBI against FLCI, A.C. Muthiah, Farouk Irani, and others for the predicate offenses of making the banks believe their records and sanction the loans, the present prosecution of Dilliraj (A.1) for money laundering, in the opinion of this Court, is misconceived. It is not the case of the C.B.I. or the Enforcement Directorate that FLCI was throughout engaged in criminal activities nor is it their case that Dilliraj (A.1) was engaged by FLCI only to fabricate records for their business purpose. For instance, if FLCI had engaged a master forger only for the purpose of forging records for their business purposes, the salary paid to the said master forger would undoubtedly be construed as proceeds of crime and if the master forger projects his salary as untainted money, he can be prosecuted under the PML Act. But, that is not the allegation against Dilliraj (A.1) in the complaint.

In view of the above discussion, we are unable to persuade ourselves to agree with the Enforcement Directorate that the salaries and perquisites that were paid to Dilliraj (A.1) while he was in employment with FLCI would amount to proceeds of crime and any property purchased with that would stand tainted. Albeit the presumption under Section 24 of the PML Act, on facts, we hold that the impugned prosecution of Dilliraj (A.1) and his wife Kotieswari (A.2) under the PML Act is misconceived and the same is accordingly quashed. 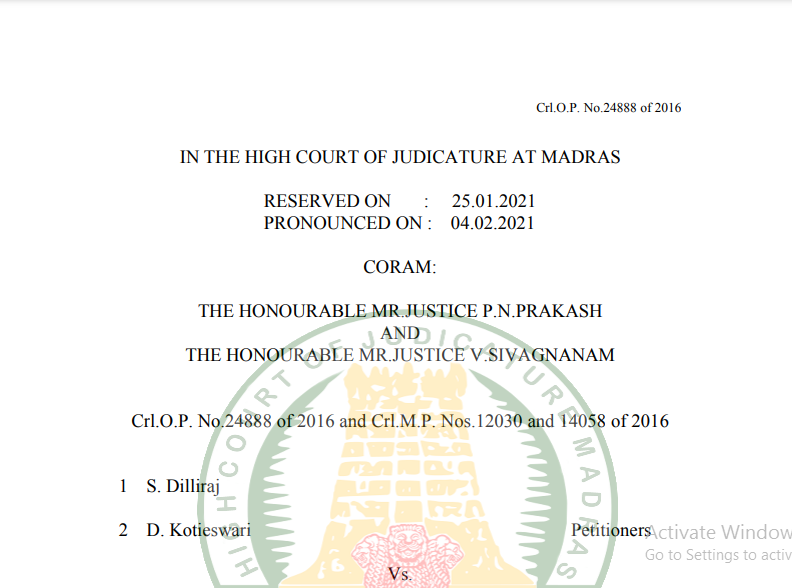