1. Petitioner had purchased goods from one Charles and his wife Shanthi.

4. Charles and his wife, did not pay any tax to the Government.

5. Without involving the said Charles and his wife Shanthi, the impugned orders came to be passed levying the entire liability on the petitioners

a. Petitioner relied on the decision of the Madras High Court made in Sri Vinayaga Agencies Vs. The Assistant Commissioner, CT Vadapalani, reported in 2013 60 VST page 283. It was held therein that the authority does not have the jurisdiction to reverse the input tax credit

b. Petitioner relied on the Press Release dated 04.05.2018- there shall not be an automatic reversal of input tax credit from the buyer on non-payment of tax by the seller.

Petitioners had availed input tax credit on the premise that tax had already been remitted to the Government, by their sellers. When it turned out that the sellers have not paid any tax and the petitioners could not furnish any proof for the same, the department was entirely justified in proceeding to recover the same from the petitioners herein.

1. If the tax had not reached the kitty of the Government, then the liability may have to be eventually borne by one party, either the seller or the buyer.

2. In the case on hand, the respondent does not appear to have taken any recovery action against the seller / Charles and his wife Shanthi, on the present transactions.

3. When it has come out that the seller has collected tax from the purchasing dealers, the omission on the part of the seller to remit the tax in question must have been viewed very seriously and strict action ought to have been initiated against him.

4. The impugned orders suffer from certain fundamental flaws. It has to be quashed for more reasons than one.

a) Non-examination of Charles in the enquiry

5. the impugned orders are quashed and the matters are remitted back to the file of the respondent. 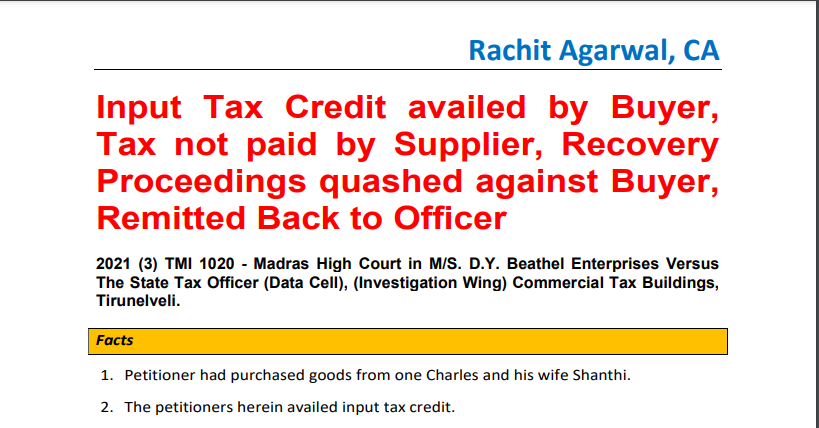