The Assistant Director, Directorate of Enforcement

The incontrovertible facts are as under:

Viswanathan (1 st petitioner/A.1) was into the business of imports and exports in the name and style of “Mercantile India”. Between 1999-2002, Viswanathan (A.1) exported stainless steel utensils to Sri Lanka, and between 2000-2001, he purchased 8 residential flats in Chennai.

However, the CESTAT, Chennai, by order dated 12.06.2007, allowed the appeal preferred by Viswanathan (A.1) by holding that the exports made by him cannot be termed to be fraudulent, as a sequel of which, demands were dropped. The Department did not agitate the matter further.

After completing the investigation, the Directorate of Enforcement filed a complaint in C.C. No.10 of 2017 in the Principal Sessions Court, (Special Court for PML Act Cases), Chennai, for offenses under Section 3 read with Section 4 of the PML Act against Viswanathan (A.1) and his wife Kavitha (A.2), for quashing which, Viswanathan (A.1) and Kavitha (A.2) have filed the present criminal original petition invoking Section 482 Cr. P.C.

From a reading of Section 2(u) of the PML Act which defines the expression “proceeds of crime”, it is limpid that the profit derived or obtained must be a result of a criminal activity that relates to a schedule offense. Even if we take the allegations in the FIR in Cr.No.123 of 2008 as gospel truth and that Viswanathan (A.1) had committed a criminal activity of obtaining an Indian passport and has thereby committed an offense under Section 420 IPC, there is no scope for him to obtain or derive any property as a result of the said criminal activity. To put it more plainly, Viswanathan (A.1) represented to the passport authorities that he is an Indian citizen and obtained a passport suppressing the fact that he is a Sri Lankan citizen. This, by itself, has not generated any property at all for his case to fall within the net of Section 2(u) of the PML Act. To say that had he disclosed to the Government of India at the time of export that he was a Sri Lankan citizen, then, he would not have been given the DEPB credit facility, etc., is an argument predicated on speculation. To cap it all, as stated above, the Directorate of Revenue Intelligence had found only irregularities in the exports and had not launched a criminal prosecution against the petitioners. Even the adjudication order that was passed by the Commissioner of Customs has been set aside in appeal by the CESTAT.

Mr.Rajnish Pathiyil took great pains to take this Court through the various United Nations charters and debates in the Parliament to show as to how the present complaint is maintainable. Reference to the aforesaid can be of assistance in clearing up any ambiguity with regard to the interpretation of the statutory provisions and not otherwise. When the alleged criminal activity of Viswanathan (A.1) of getting an Indian passport by suppressing his citizenship, has, by itself, not laid any golden eggs to be construed as proceeds of crime, the discussion on international conventions is unnecessary.

As a result, the proceedings in C.C. No.10 of 2017 on the file of the Principal Sessions Court (Special Court for PMLA Cases), Chennai, is quashed and as a sequel, this criminal original petition stands allowed. Connected Crl.M.Ps. stand closed. 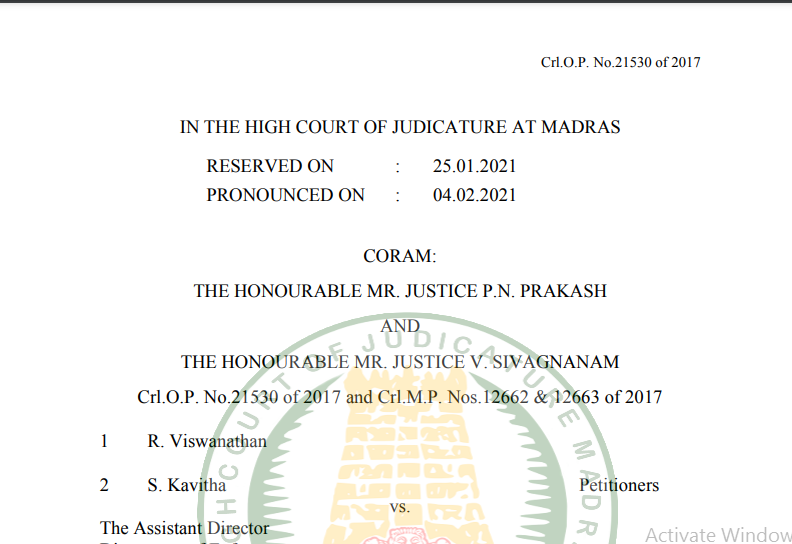 
Can We maintain book of account in electronic mode?