1. The mixed question of fact and law has to be adjudicated with reference to the original records and evidence, before the appellate authority

2. The importance of the appellate remedy can never be undermined and the petitioner has to exhaust the same as the mixed question of fact and law are to be considered by the appellate authority, who is the final fact finding authority.

3. Entertaining a Writ Petition before exhausting the appellate remedy is an exception.

4. There is an imminent threat or gross injustice warranting urgent relief to be granted.

5. Mere violation of principles of natural justice is insufficient to entertain writ proceedings under Article 226 of the Constitution of India, as every Writ Petition is filed based on one or the other ground stating that the principles of natural justice are violated or statutory requirements are not complied with or there is illegality or otherwise.

6. Very purpose and object of legislation providing an appellate remedy cannot be diluted

7. The statutory appellate authorities are the final fact-finding authorities.

8. Entertainment of a Writ Petition by dispensing with appellate remedy is not preferable and such an exercise would cause injury to the institutional hierarchy

9. The finding of such appellate forums would be valuable assistance,

10. Based on the mere affidavits filed by the litigants, the disputed facts cannot be concluded.

11. The practice of filing the Writ Petition without exhausting the statutory remedies are in ascending mode and such Writ Petitions are filed with a view to avoiding pre-deposits to be made in statutory appeals and on the ground that the appellate remedies are time-consuming. 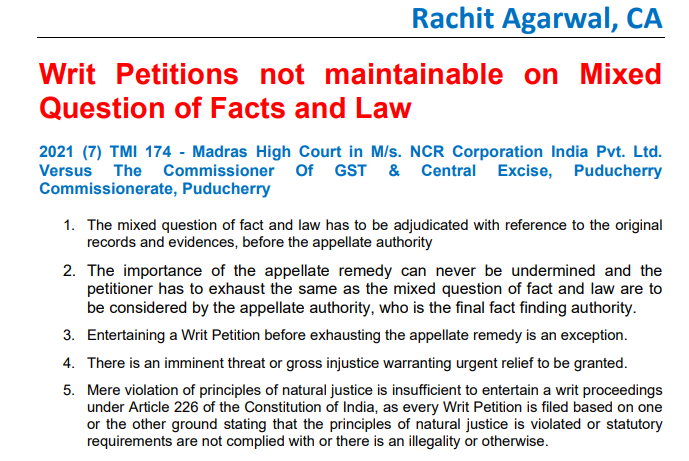