This batch of 23 Writ Petitions has been filed by assessees under the Tamil Nadu Goods and Service Tax Act, 2017 (‘TNGST Act’) who challenge notices issued by the respondent, Commercial Tax Authorities proposing the denial of the transition of credit in respect of Tax Deducted at Source (TDS) in terms of Section 13 of the Tamil Nadu Value Added Tax Act, 2006 (in short ‘TNVAT Act’) in 10 cases, and orders confirming the aforesaid proposals, in 13 cases.

The common factual position is that all petitioners, in the era of TNVAT, have accumulated credit of TDS and have also been permitted to carry forward the same from year to year. The petitioners sought transition of accumulated TDS into their respective accounts for set off against output tax – GST liabilities. This has been denied.

The argument that at the time of deduction, the amount (for want of a better word) is a ‘deposit’, when adjusted, it assumes the nature of ‘tax’, when carried forward, it bears the character of ‘credit’ and when refunded, it bears the character of an ‘amount’ would result in a distorted and imbalanced interpretation of the provisions of the Act and scheme set out thereunder.

I am thus of the view that once that any deduction made towards anticipated tax liability would assume the character of tax and will not change or fluctuate depending on whether it is held as credit or whether it is an adjustment against tax liability. To attribute such fluctuating character to an amount would distort the scheme of taxation and cause many difficulties in the interpretation of the various ancillary provisions. The interpretation of the provision must be such that it lends itself to certainty in its conclusion.

Though only supportive, the substituted Rule 9 (with effect from 29.01.2016) also appears to clarify this position. While erstwhile Rule 9 dealing with tax deduction at source stated that ‘any person who makes a deduction under Section 13 shall deposit the same so deducted’ with the assessing authority, the amended rule reads ‘any person liable to make deduction and payment of tax under Section 13 shall apply to the registering authority having jurisdiction over the person for a Tax Deductor Identification Number’, prior to effecting such deduction. Perhaps Legislature, by employing the language in the substituted Rule has clarified the position that the ‘deposit’ and ‘amount’ , referred to in Section 13 are only of the nature of the tax.

In the light of the detailed discussion as above, the impugned orders are set aside, and the petitioners held to be entitled to transition TDS under the TNVAT Act in terms of Section 140 of the TNGST 2017. Allowed. Connected Miscellaneous Petitions are closed with no order as to costs. 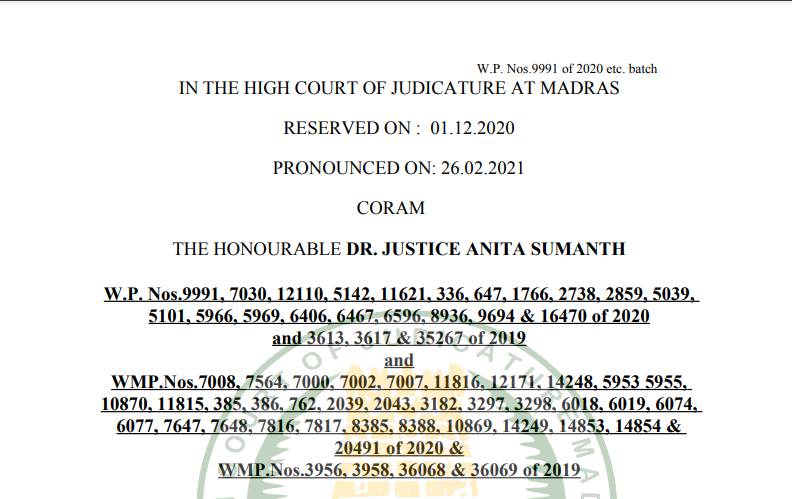