India is the only country in the entire world which has made spending towards CSR mandatory for certain categories of Companies and now considering the present condition where the widely spread novel Corona Virus has already impacted the entire nation, the need of such funds to be spent for its preventive measures i.e. health care and treatment is the topmost priority for the Country and in this regards the Government of India has set up the Prime Minister’s Citizen Assistance and Relief in Emergency Situations Fund (PM-CARES Fund) to deal with this disaster and in order to cope up with this emergency and distress situation in the wake of the COVID-19 pandemic. In this connection, the Corporate Affairs Minister has also announced that any contribution made to the said fund shall qualify as CSR Expenditure.

Corporates are joining hands with GOI

On March 23, 2020, the Ministry of Corporate Affairs has also come up with the clarification that spending of CSR Fund to COVID-19 is eligible CSR activity. Some renowned corporate giants like Reliance Industries, Adani, Kotak Mahindra Bank have already announced its initiatives to tackle the present situation and contributed funds in this regard. Rule 4 (3) of the Companies (Corporate Social Responsibility Policy) Rules, 2014, provides that the company may also collaborate with other companies for undertaking such activities or projects or programs pertaining to CSR but no such activities shall be regarded as CSR activity if it is undertaken in pursuance of the Company’s normal course of business. Further, If the CSR projects or programs or activities are undertaken in India then only it shall amount to CSR expenditure and any contribution made directly or indirectly to any political party shall not be considered as CSR activity.

This present scenario requires Corporates to contribute not only to those areas where they are operating but also to contribute in whatsoever manner to the Nation which is struggling against this pandemic and every such contribution will surely supplement the efforts of the Government of India.

The Companies Act, 2013 vide Sec. 135(1) requires every company (including a Sec. 8 Company and Government Company) having its net worth of rupees five hundred crores or more, or turnover of rupees one thousand crores or more or a net profit of rupees five crores or more during the immediately preceding financial year shall constitute a Corporate Social Responsibility Committee (CSR Committee) of the Board.

Except for such companies which are not required to the appointment any independent director or such companies where the requirements of the minimum number of directors are less than three, the Corporate Social Responsibility Committee shall be composed of three or more directors, out of which at least one director shall be an independent director.

CSR Committee for the formulation of CSR Policies

Role of Board of Directors

The Board of Directors of every such company (as referred above) approve the Corporate Social Responsibility Policy recommended to it by the CSR Committee and shall also disclose the policy in its annual report i.e. Directors Report and the same is also required to be uploaded on the company’s website if any.

It is provided u/s 135(5) of the Companies Act, 2013 that the Board of every company referred to in sub-section (1), shall ensure that the company spends, in every financial year, at least 2% (two percent) of the average net profits of the company made during the three immediately preceding financial years in pursuance of its Corporate Social Responsibility Policy but there are the circumstances when many of the companies trap under sub-section (1) of Sec. 135 of the Act just because of its Turnover or its Net worth and does not have average profits over last three years. In this situation, two primary questions of such companies are: do they required to constitute CSR Committee and comply with its requirements and the second question is with regards to the spending of an amount towards CSR Activities.

In this regard, such companies are required to constitute a CSR committee but since the company does not have average net profits over the last three years, the Company would not be required to do the mandatory CSR spending.

There are several occasions where the newly incorporated company which has not completed 3 years but possess net worth/ turnover as per sub-section (1) of Sec. 135 of the Act. In such a case even if such a Company has been incorporated for less than 3 years ago but if it meets the criteria mentioned in sub-section (1), then such Company needs to comply with CSR provisions with regards to the constitution of the CSR Committee. However, there will not be any such mandatory CSR spending, considering the fact that the Company has been incorporated less than 3 years ago.

In case if the company fails to spend such amount which is required to be spent in any particular financial year, then the Board of Director of such Company shall specify the reasons for not spending the amount and the same is required to be disclosed the board’s report and the Registrar of Companies having jurisdiction over such Company may issue a written notice to the company, the officer who is in default to show the cause of such non-compliance.

Modus- For such projects or programs or activities

The company may undertake its CSR activities through

But where the company has decided to undertake its CSR activities through a company established u/s 8 of the Act or Regd. Trust or Regd. Society, other than those specified above, such company or trust or society is required to have an established track record of three years in undertaking similar programs or projects and such company is required to specify the projects or programs to be undertaken, the modalities of utilization of funds of such projects and programs and the monitoring and reporting mechanism”.

Any surplus arising out of the CSR projects or programs or activities shall not form part of the business profit of a company.

(a) Constitute the CSR Committee and

(c) To spent towards CSR activities

until such time it again meets the criteria specified in sub-section (1) of section 135. 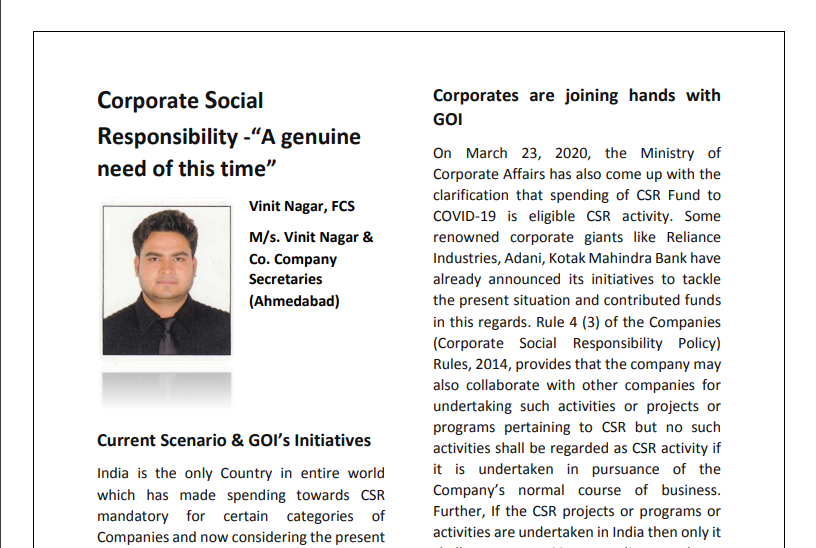