As these writ petitions raise a common challenge to the legality of orders of detention passed by the respondents under the GST Act, they are taken up together for consideration and disposed of by this common judgment.

For the sake of convenience, the general provisions regarding detention and their scope and ambit are discussed first, and the application of the legal principles to the facts of the individual cases discussed thereafter. I have chosen to resort to said format because I have come across numerous instances of writ petitions being filed in this court challenging detention orders passed under the GST Act when the scheme of the Act clearly indicates that the writ court is not to be ordinarily approached in detention cases where effective alternate remedies by way of provisional clearance, and appeal thereafter, are provided against alleged arbitrary/illegal detention orders. The legal position in this regard was recently reiterated by the Supreme Court in State of Uttar Pradesh v. Kay Pan Fragrance Pvt. Ltd. – [2020 (74) GSTR 281 (SC)] when it observed that writ petitions seeking directions to release seized goods ought not to be entertained as the Act provides for a complete mechanism for release and disposal of seized goods. I also believe that enunciation of the scope and ambit of the statutory provision would help clarify the doubts arising in the minds of proper officers, who are entrusted with the task of overseeing the transportation of taxable goods with a view to check the evasion of tax, as regards the procedure to be followed while going about their assigned duties.

The detention of goods and vehicles, while in transit pursuant to a commercial arrangement between the consignor and consignee thereof, is often seen as infringing the fundamental freedom guaranteed to a citizen under Article 19 (1)(g) of our Constitution, to carry on a trade or business of his choice. It is also seen as a restriction to one’s freedom to engage in trade, commerce, and intercourse throughout the territory of India, a right guaranteed under Article 301 of the Constitution. The justification of any legal provision that authorizes such detention must, therefore, be through a demonstration of the reasonableness of the provision, and its necessity in the larger public interest.

When the writ petition came up for admission, this court took note of the submission of the learned counsel for the petitioner that a reply had already been preferred to the notice in Form GST MOV-7 and directed a listing of the case after three days so that an adjudication order under Section 129 (3) in Form GST MOV-9 could be passed by the proper officer after considering the objections of the petitioner. The said order was subsequently passed confirming the proposals in the notice. This court then permitted the petitioner to amend the writ petition to incorporate a challenge against the said order, while also permitting him to clear the goods and the vehicles on furnishing a bank guarantee for the amounts demanded in the adjudication order. The respondents were restrained from invoking the bank guarantee during the pendency of the writ petition.

On a consideration of the rival contentions, I am of the view that under Section 129 of the Act, if a proper officer who is entrusted with the task of detaining goods, finds that they have been transported in contravention of the rules, he does not have the discretion to condone the procedural lapse or relax its rigour in particular cases. He must interpret the Rule strictly keeping in mind the statutory scheme that aims to curb tax evasion. In as much as the adjudication that is expected of him is a summary one, he can do no more than determining whether or not on a literal reading of the statutory provisions, together with the circulars issued from time to time, there has been a breach occasioned thereof. Any person aggrieved by the order of the proper officer must necessarily approach the appellate authority before which an appeal against the adjudication order under Section 129 (3) of the Act is maintainable. In the instant case too, the remedy of the petitioner is to approach the appellate authority under the Act against the finding of the proper officer.

The upshot of the above discussion is that I do not find any reason to interfere with the adjudication orders in Form GST MOV-9 impugned in the writ petition. The petitioner is relegated to his alternate remedy of preferring appeals against the said adjudication orders before the appellate authority under the Act. All contentions, legal and factual, are left open to be agitated by the petitioner before the appellate authority. To enable the petitioner to do so, I direct that the stay granted by this court, against the invocation of the bank guarantee furnished by the petitioner, shall continue to remain in force for a period of two months from the date of receipt of a copy of this judgment.

The writ petitions are disposed of as above. No costs. 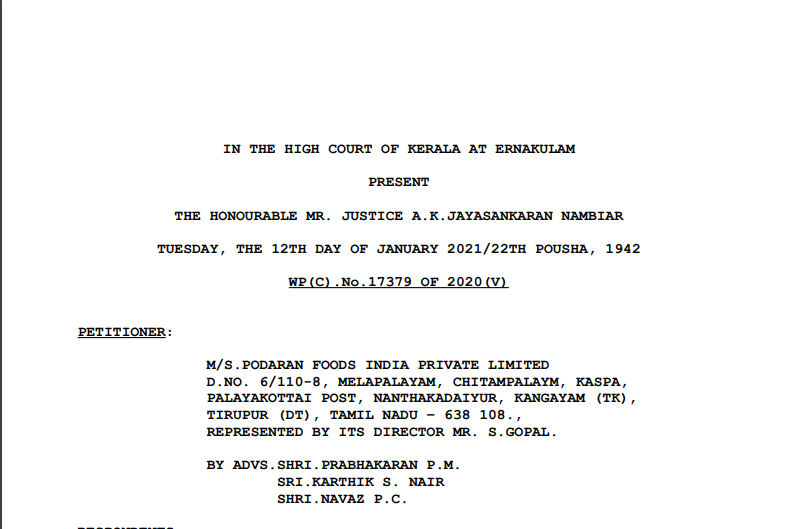 Tagged with: Kerala HC in the case of M/s. Podaran Foods India Private Limited Versus State of Kerala
Discuss Now Opinions & information presented by ConsultEase Members are their own.