The petitioner has approached this Court aggrieved by Exts.P6 and P7 detention notices issued to him by the 1st respondent detaining a consignment of used generators that were being transported at his instance.

On a perusal of Exts.P6 and P7 detention notices, it is seen that the reason for the detention was the non-mention of the IGST payable in the e-way bill that accompanied the transportation of the goods. It is the contention of the learned counsel for the petitioner that as per Rule 138A of the SGST Rules there is no requirement of mentioning the IGST applicable in the e-way bill and hence, the authorities are not justified in detaining the consignment.

On a consideration of the facts and circumstances of the case and the submissions made across the Bar, I find force in the contention of the learned counsel for the petitioner that as per the SGST Act and R.138 A of the SGST Rules, there is no requirement to mention the details of the tax payment in the copy of the e-way bill that accompanies the goods. It is not in dispute that the details of the tax paid were shown in the invoice that accompanied the transportation and there is no dispute raised by the respondents with regard to the accompaniment of the invoice along with the transportation. Under such circumstances and taking note of the judgment of this Court dated 12.08.2020 in W.P(C). No.16356 of 2020, I allow this Writ Petition by quashing Exts.P6 and P7 detention notices and directing the 1st respondent to release the goods and the vehicle to the petitioner on the production of a copy of this judgment. The learned Government Pleader shall communicate a gist of the order to the 1st respondent for enabling the petitioner to effect an expeditious clearance of the goods and the vehicle. 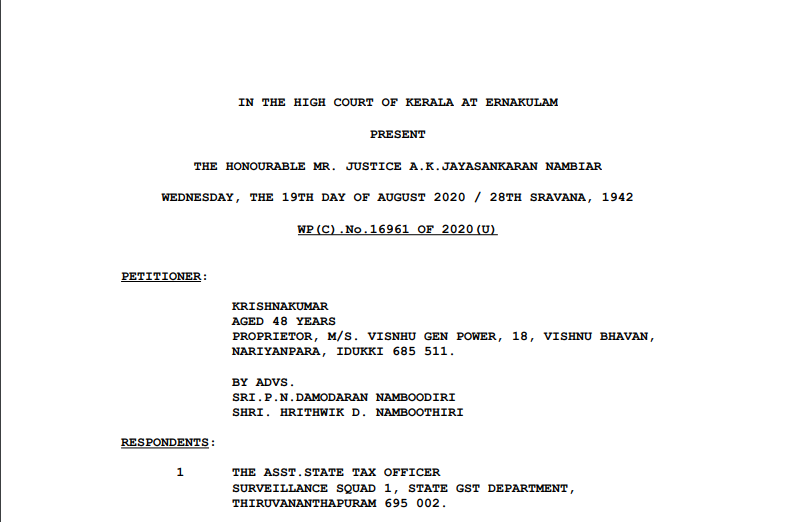 Tagged with: Kerala HC in the case of Krishnakumar Versus The Asst. State Tax Officer
Discuss Now Opinions & information presented by ConsultEase Members are their own.