The State of Kerala

The petitioner, who is a purchaser of fresh turmeric from an agriculturist in Karnataka, has approached this Court aggrieved by the detention of the consignment, while in transit, at Muthanga in Wayanad. In the writ petition, it is the case of the petitioner that, the consignment in question was being transported under cover of an invoice (Ext.P3) generated by the petitioner in his capacity as the purchaser of the goods, which showed the goods as attracting tax on a reverse charge basis, and Ext.P5 e-way bill that was also generated by the petitioner, which showed the consignment as comprising of goods that were exempted from tax in as much as they fell under HSN code 910. The vehicle and the goods were detained, and Ext.P10 notice in FORM GST MOV-7 was issued to the petitioner wherein the objection was essential with regard to the non-registration of the person making the interstate supply, as also the fact that the purchase bill issued by the petitioner was not a valid document for the purposes of supporting an interstate taxable supply.

The learned Government Pleader would submit on instructions that the goods on verification were found to not answer the description of exempted goods under HSN Code 910. It is her further submission that the consignment was not accompanied by a delivery challan that is required to accompany any consignment of exempted goods sold by an unregistered person.

On a consideration of the rival submission, I am of the view that in the instant case, the declaration by the petitioner in the e-way bill, as also before the respondent authorities, has consistently been that the purchase was effected from an agriculturist in Karnataka who, going by the provisions of Section 23 of the GST Act, is not required to get himself registered for the sale of agricultural produce. Even assuming that the respondents dispute the said contention of the petitioner, the remedy available to them is to proceed against the agriculturist in question, for not taking the registration as required under the applicable provisions of the Act. The non-registration of the consignor, or the alleged misclassification of the goods under transportation, cannot be a ground for detention under Section 129 of the GST Act.

The writ petition is disposed of as above. 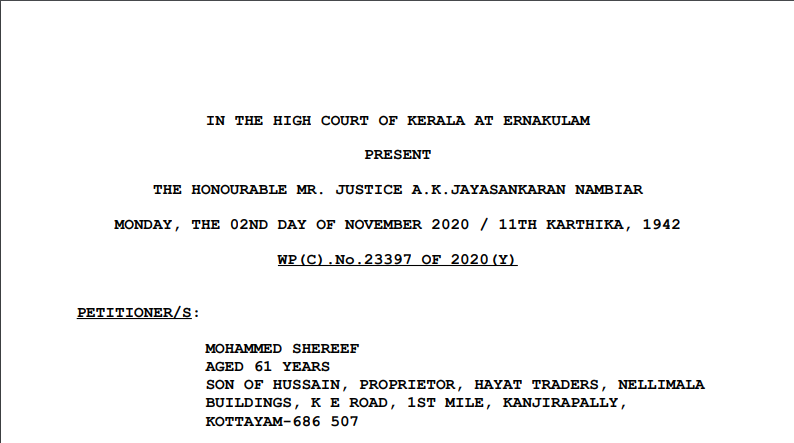 Tagged with: Kerala HC in the case of Mohammed Shereef Versus The State of Kerala
Discuss Now Opinions & information presented by ConsultEase Members are their own.