By this petition, the petitioner is challenging the orders of attachment of its bank accounts under Section 83 of the CGST Act. By way of interim relief, the petitioner is praying for directing the 1st respondent to release the bank guarantee furnished pursuant to the order at Ext.P12(Series) and for discharge of the bond executed pursuant to the order at Ext.P9.

The petitioner, feeling aggrieved by the modification affected by the order dated 24.08.2020 (Ext.P9) had tendered a protest letter (Ext.P11) on 27.08.2020 by stating that the petitioner is furnishing the bank guarantee and is executing a bond under protest reserving the right to challenge the same before this Court. Thereafter, the petitioner preferred a memo for withdrawal of the Writ petition on 05.10.2020 and that is how the writ petition came to be dismissed as withdrawn on 13.10.2020.

In the case in hand, a search was conducted on 09.06.2020 and the further proceedings thereof are still pending. Claiming to be necessary in the interest of revenue, by orders at Exts.P6, P6A and P6B, bank accounts of the petitioner came to be attached and subsequently, on the basis of objection (Ext.P7), the provisional attachment order has been modified by the order at Ext.P9, the relevant portion of which is already quoted herein above. The petitioner is directed to furnish the security in the form of bank guarantee in the name of the Hon’ble President of India, equivalent to the credit balance available as on 20.08.2020 which according to the learned counsel for the petitioner, is about Rs.30 crores. Neither the order at Exts.P6(series) nor the order at Ext.P9 reflects anything which substantiate that interest of revenue requires this action to be taken in the matter. What is the reasonable apprehension with the authority is not disclosed in the order at Ext.P6(Series) or in the order at Ext.P9. Furnishing bank guarantee of about Rs.30 crores would certainly block that much amount from the business of the petitioner. The petitioner, on account of an order by the adjudicating authority, has no remedy of appeal under Section 107 of the CGST Act in the matter. Therefore, in the light of the ratio of judgments in the matter of Valerius Industries and AJE India Private Limited, I am of the considered opinion that the order directing furnishing of the bank guarantee needs to be stayed till disposal of the writ petition, by directing the petitioner to execute the undertaking that he will not sell, alienate or dealt with any of his assets as seen from the balance sheet produced by him at Ext.P16.

Order of the Hon’ble High Court:

During the pendency of the petition, the impugned direction contained in Clause 2(a) of Ext.P9, requiring the petitioner to furnish security in the form of the bank guarantee has stayed and the petitioner is directed to furnish undertaking before this Court by way of an affidavit that it shall not alienate any of its fixed assets, plant, property, and equipment shown in the balance sheet dated 31.03.2020 (Ext.P16) till disposal of the instant petition. Parties to act on an authenticated copy of this order. 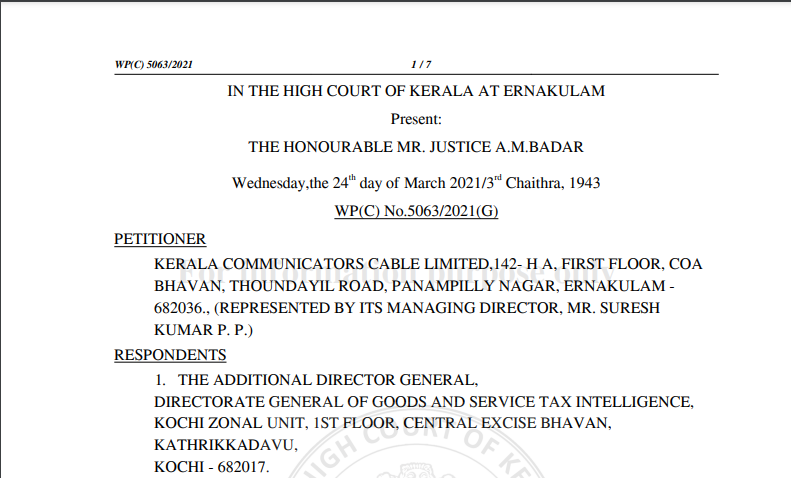 
ITC on food or rent a cab for customer