By this writ application under Article 226 of the Constitution of India, the writ applicants have prayed for the following reliefs:

“This Hon’ble Court may graciously be pleased to issue a writ, order or direction in the nature of:

(a) Certiorari quashing the MOV-10 (Confiscation notice dated 08.08.20 (Annexure-F to the petition);

(f) Mandamus directing the Respondent No.3 to forthwith release the goods and vehicle without demanding any security;

(g) Pending notice, admission and final hearing of this petition, this Hon’ble Court may be pleased to direct the learned Respondent Authorities to forthwith release goods with vehicle no.KA01 AE 4259 detained/seized in purported exercise of powers under Section 129 and Section 130 of the GST Acts;

(h) Issue any other writ, order or direction in favour of the petitioner which this Hon’ble Court deems fit in the facts and circumstances of the case;

Mr. Gupta, the learned counsel did make few submissions more particularly with regard to the very jurisdiction of the Chief Commissioner of State Tax. However, as we are not inclined to go into such issue, Mr. Gupta made a request that this petition may be disposed of relegating the writ applicants to avail the alternative remedy of filing an appeal under Section 107 of the Act. It is further pointed out by Mr. Gupta that yesterday the final order in Form MOV-11 has been passed. This is suggestive of the fact that the final order of confiscation has been passed. Such order would be an appealable order under Section 107 of the Act. It is also pointed out that three months back, an application was filed under Section 67(6) of the Act for provisional release of the goods and the conveyance. However, according to the learned counsel, no orders have been passed on such application.

Related Topic:
Gujarat HC in the case of Vimal Yashwantgiri Goswami Versus State of Gujarat

We dispose of this writ application with a direction to the authority concerned to immediately take up the application filed by the writ applicants under Section 67(6) of the Act for the provisional release of the goods and the conveyance and pass an appropriate order in accordance with law within a period of one week from the date of the presentation of this order. We clarify that we have otherwise not gone into the merits of the matter.

With the above, this writ application stands disposed of. 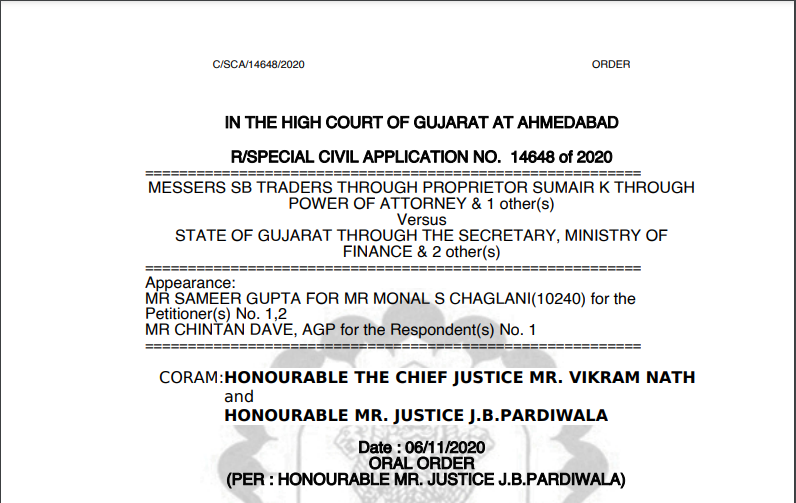 Gujarat HC in the case of Nipun A Bhagat, Proprietor of Steel Kraft Industries Versus State of Gujarat

Gujarat HC in the case of Punjab National Bank

Gujarat HC in the case of M/s. Formative Tex-Fab Versus State of Gujarat