The Superintendent of GST and Central Excise

The petitioner is an Assessee before the respondent authorities, in terms of the provisions of the Central Goods and Services Tax Act, 2017, (in short ‘CGST Act’). The CGST Act was implemented with effect from 01.07.2017 and provides for the assessment of turnover from sales and services as enumerated therein. Regular monthly returns have been filed by the petitioner and this is not disputed.

While this was so, there appears to have been an investigation initiated by the respondents in the premises of the petitioner, commencing from 15.10.2018 and continuing on various dates thereafter. Seizures of voluminous documents and records have been affected. The petitioner has also been called upon to furnish various records and has done so, under letters dated 17.11.2018 and 22.11.2018.

The above request is unacceptable. A statement is no substitute for an assessment. No doubt, the value of the statement and the retraction thereof will be considered by the Assessing Authority while framing the order of assessment, and nothing stated in this order shall be considered to be a fetter upon the powers of the assessing authority to do in so. However, in the absence of a statutory provision that enables such imposition of a condition even prior to the determination of the violations by an assessee and quantification of the consequent demands, this argument is rejected.

I however find that the statute contains inter alia Section 83 that vests the power of interim and provisional attachment of property to protect the interests of the department, pending assessment. The Section is extracted hereunder:

83. Provisional attachment to protect revenue in certain cases.- Where during the pendency of any proceedings under section 62 or section 63 or section 64 or section 67 or section 73 or section 74, the Commissioner is of the opinion that for the purpose of protecting the interest of the Government revenue, it is necessary so to do, he may, by order in writing attach provisionally any property, including bank account, belonging to the taxable person in such manner as may be prescribed. (2) Every such provisional attachment shall cease to have effect after the expiry of a period of one year from the date of the order made under sub-section (1).

The above provision is in pari materia with the provisions of Section 281B of the Income Tax Act, 1961 that also provides for a provisional attachment of property of an assessee pending adjudication and assessment/re-assessment proceedings where the Income Tax Department believes that such attachment is necessary to protect the interests of the Revenue. The provision is extracted below for the sake of completion and to demonstrate that the provisions of Section 83 have been framed along identical lines as Section 281B.

(2) Every such provisional attachment shall cease to have effect after the expiry of a period of six months from the date of the order made under sub-section (1):

Thus, there is ammunition available in the arsenal of the department that can well be utilized to protect its interests.

In summary, this Writ Petition is allowed. Connected WMP is closed, with no order as to costs. 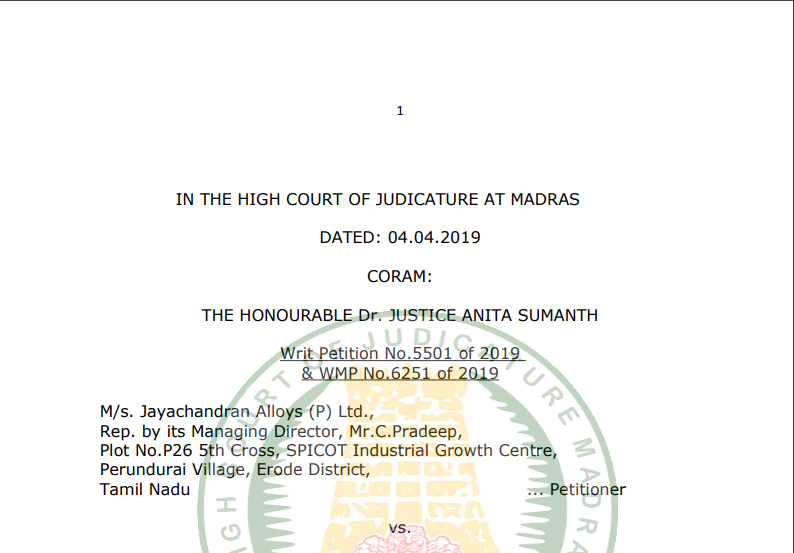 Refund Can be Granted When The DBK Was Claimed and Refunded