The Bihar State Sunni Wakf Board

The challenge in the present appeal is to an order passed by the High Court of Judicature at Patna dated 6.2.2013 whereby a writ petition filed by respondent No. 41 herein was allowed, holding that the tenant in the premises in question was representing a joint Hindu family and that the Karta was not competent to surrender the tenancy rights in favour of respondent No. 1-The Bihar State Sunni Wakf Board2 and consequently the induction of the appellant as a tenant by the Wakf Board was illegal. Accordingly, a direction was issued to dispossess the appellant from the suit premises and to hand over the vacant possession to the plaintiff.

Thus, mere payment of rent by a great grandfather or by the grandfather of the plaintiff raises no presumption that it was a joint Hindu family business. The High Court has clearly erred in law to hold so without any legal or factual basis.

The pleaded stand of Plaintiff is that the hotel was closed for several years. Therefore, the liability to pay monthly rent continued to accrue upon Karta – Devendra Prasad Sinha. The question is as to whether, in these circumstances, on account of the cessation of activities of the running of the hotel, the act of the surrender of tenancy is in fact for the benefit of the joint family. The learned High Court found that the letter of surrender was not reliable or tenable. The executor of the surrender letter has admitted such surrender letter in the written statement and while appearing as a witness as DW-5. The Mutawalli Md. Salimuddin has also accepted the surrender letter in the written statement and while appearing in the witness box as DW-10. Merely for the reason that signatures in the translated copy do not tally with the Urdu copy is not sufficient to hold the surrender letter as unreliable as the translation can be incorrect but the correctness of the document in has not been disputed by the executor or by the acceptor. The said document could not have been said to be unreliable on the basis of the statement of the plaintiff who is not a party to such transaction. It is one thing to say that the document is unreliable and another to say that the document does not bind the plaintiff. We have no hesitation to hold that the document was validly proved and accepted by the Wakf Board. Therefore, the act of surrender of tenancy was for the benefit of the Joint Hindu family. 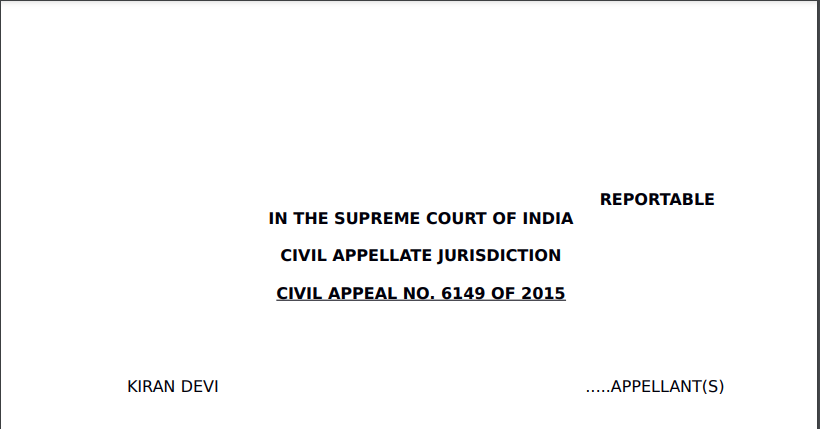 Tagged with: Supreme Court in the case of Kiran Devi Versus The Bihar State Sunni Wakf Board
Discuss Now Opinions & information presented by ConsultEase Members are their own.

Supreme Court in the case of Corporation Bank Versus M/s. Saraswati Abharansala

SC Order In Re Cognizance For Extension Of Limitation

SC in the case of Amit Jain Versus Union of India

Keshvananda Bharti - 10 things you should know

SC in the case of Commissioner of Service Tax Versus M/s Adani Gas Ltd.


How to deal in GSTR2 with Missed ITC in GSTR3B