Supreme Court in the case of Corporation Bank Versus M/s. Saraswati Abharansala

The first respondent is a dealer in bullion gold. It entered into transactions of purchase of gold from the appellant herein during the period 6th April 1999 and 10th December 1999. The total transactions during the said period were for a sum of Rs.423748518/-. Indisputably the rate of tax which was prevailing at the relevant time was 1%. The amount of sales tax at the said rate was collected from respondent No.1. The amount so collected, indisputably had been deposited with the sales tax authorities.

“9 Any dealer Sale of bullion and specie to the registered dealer within the State.

It was given a retrospective effect.

If the substantive provision of a statute provides for a refund, the State ordinarily by subordinate legislation could not have laid down that the tax paid even by mistake would not be refunded. If a tax has been paid in excess of the tax specified, save and except the cases involving the principle of ‘unjust enrichment’, excess tax realized must be refunded. The State,
furthermore is bound to act reasonably having regard to the equality clause contained in Article 14 of the Constitution of India.

It is not even a case where the doctrine of unjust enrichment has any application as it is not the case of the respondent//State that the buyer has passed on the excess amount of tax collected by it to the purchasers.

In view of the admitted fact that tax had been collected and paid for the period 6th April 1999 and 10th December 1999 @ 1 % of the price which having been reduced from 1st April 1999 to 0.5 %, the State, in our opinion, is bound to refund the excess amount deposited with it.

As all the facts are admitted and the State had refused to refund the excess amount of tax realized from the appellant, in our opinion, the writ petition was maintainable.

We are, therefore, of the opinion that the interest of justice would be served if instead of the appellant refunding the amount to the first respondent and later claiming a refund from the authorities, if the State of Kerala is directed to refund the amount of tax collected with interest at the rate of 10% per annum to the first respondent at an early date, and not later than four months from the date of communication of this order. It is ordered accordingly. If, however, the amount is not paid within the aforementioned period, the outstanding amount shall carry interest @ 15 % per annum.

The appeal is allowed with the aforementioned observations and direction. In the facts and circumstances of the case, however, there shall be no order as to costs. 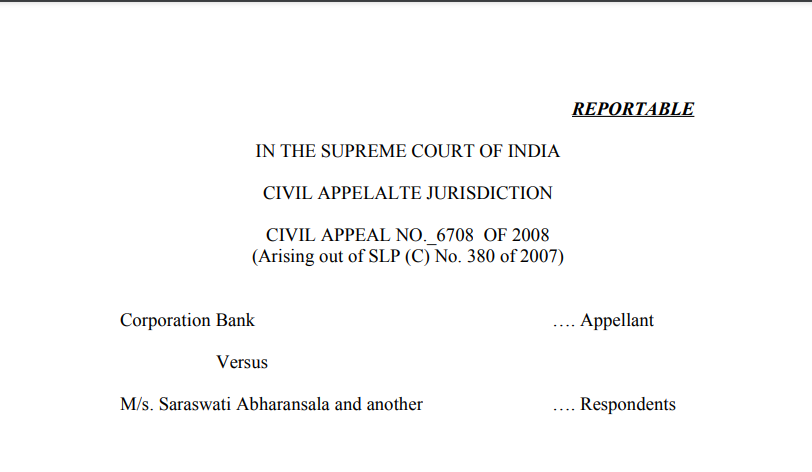 Tagged with: Supreme Court in the case of Corporation Bank Versus M/s. Saraswati Abharansala
Discuss Now Opinions & information presented by ConsultEase Members are their own.

Supreme Court Order In Re: Contagion of COVID-19 Virus In Prisons

SC Order in the case of The Chief Election Commissioner of India Versus M.R Vijayabhaskar

Supreme Court in the case of Dr. Jaishri Laxmanrao Patil Versus The Chief Minister

SC Order In Re Cognizance For Extension Of Limitation