The following are some of the important highlights of the judgment rendered by the Hon‘ble Supreme Court on 26.3.2021.

(A): The events (i) occurring more than 10 years from the date of filing of petition (ii) failed business decisions and (iii) the removal of a person from Directorship can never be projected as acts oppressive or prejudicial to the interests of the minorities.

(B): The removal of CPM was only from the Executive Chairmanship and even the removal from Directorship can never be held to be oppressive or prejudicial conduct, entitling a persona to file a CP U/s 241.

(C): The subsequent conduct of CPM in leaking his mail dated 2510 2016 to the Press and sending replies to the Income Tax Authorities enclosing 4 box files, even when while continuing as a Director, justified his removal even from the Directorship of Tata Sons and other group companies.

(D): Even in cases where the Tribunal finds that the removal of a Director was not in accordance with law or was not justified on facts, the Tribunal cannot grant relief under Section 242 unless the removal was oppressive or prejudicial.

(E): Where the removal of a Director might have been carried out perfectly in accordance with law and yet may be part of a larger design to oppress or prejudice the interests of some members, only in such cases, NCLT can grant relief under Section 242.

(F): For invoking the just and equitable standard, the underlying principle is that the Court should be satisfied that the partners cannot carry on together or that one of them cannot certainly carry on with the other. In this case, there was no quasi partnership between the Tata Group and S.P. Group.

(H): The fundamental principle for CP U/s 241 to be maintainable, is that it is just and equitable that the company be wound up. There were no pleading, no findings, and no prayer, and yet the appeal has been allowed by NCLAT more particularly when the Trust who are shareholders are Tatasons Limited, are engaged in charitable, philanthropic, social, and culture activities and hence no case for winding up at all.

(I): The following words at the end of sub–section (1) of 242 “the Tribunal may, with a view to bringing to an end the matters complained of, make such order as it thinks fit” cannot be interpreted as conferring the Tribunal any implied power directing reinstatement of a director or other officer of the company who has been removed from such office.

(K): The sine qua non for invoking Section 241 is that the affairs of the Company should have been conducted or are being conducted in a manner oppressive or prejudicial to some of the members.

(L): Articles of Association of a company constitute a contract among shareholders, is the bedrock of Company Law and shareholder cannot challenge the provisions of AA. However, NCLT, U/s 242 Co Act set aside any amendment to the Articles only which takes away recognized proprietary rights of shareholders.

(M): It was observed that If all Directors are required under Section 166(3) to exercise independent judgment and skill, there is no need to have a separate provision for the independent director as per Section 149 (4) of Co Act – can it be assumed that directors appointed in AGM may not be independent in practice – though may be presumed in theory.

PRE-MEETING CONSULTATION BEFORE EITHER BOARD MEETING OF GENERAL MEETING RECOGNIZED.

(O): Whenever an institution happens to be a shareholder and a notice of a meeting either of the Board or of the General body is issued, it is but normal for the institution to have an idea about the stand to be taken by them in the forthcoming meeting – hence there could be pre-meeting confabulation.

(P): But as we have pointed out elsewhere, CPM himself sought, while accepting the office of Executive Chairmanship, the continued guidance of RNT. When the Board, of which CPM was a Chairman, nominated RNT as Chairman Emeritus and recorded their desire to look forward to his support and guidance, it is not open to the complainant companies to call RNT a shadow Director.

PRINCIPLE OF PROPORTIONAL REPRESENTATION ON THE BOARD OF A COMPANY.

(Q): Section 152 which contains provisions for the appointment of Directors, does not confer any right of proportionate representation on the Board of any company, be it public or private, however, U/s 151, there is a provision for small shareholders.

IF THERE ARE HUGE RETURN OVER A PERIOD OF TIME, HOW CONDUCT OF MAJORITY COULD BE  OPPRESSIVE TO MINORITY.

(R): In fact, admittedly the value of 18.37% of the shareholding of the S. P. Group, which is a minority group, as of March 2016 was around Rs.58,441 crores as against the purchase consideration of Rs.69 crores –during the period from 1991 to 2016, SP group had received aggregate dividends to the tune of Rs. 872 crores. How this kind of a huge return on investment and the skyrocketing of the appreciation of the value of the investment,  could be attributed to oppression and mismanagement of the majority group.

HOW QUASI-PARTNERSHIP COULD BE PROVED.

(S): The quasi partnership could be proved if there is pre–existing relationship before incorporation or immediately thereafter in the form of investments/members of board/shareholding. There is no pleadings nor any evidence of quasi–partnership – hence no quasi–partnership.

(T): The Claim for proportionate CPM for representation on the Board is neither statutorily or contractually sustainable nor factually justified. RNT who was holding the mantle as the Chairman of Tata Sons for a period of 21 years from 1991 to 2012, actually conceded a more than proportionate share to the S.P. Group by nominating CPM as his Successor/Chairman.

(U): In the Companies Act, 2013, there is no concept of deemed public limited as was provided under Section 43A of the Companies Act, 1956, and hence Tata Sons Limited was reverted back to Tata Sons (P) Ltd. But Companies Act, 2013 changed the complexion of the game. It not merely put an end to the concept of deemed public companies but also restored the definition of the expression “private company” to the position that prevailed before Act 53 of 2000. Section 2(68) of the 2013 Act which defines a “private company” incorporated only the original 3 prescriptions contained in subclauses (a), (b) and (c) of clause (iii) of subsection (1) of section 3 of Co. Act, 2013.

(X): The Hon‘ble Supreme Court even dismissed the application filed by CPM Group for seeking an exit from Tata Group by having a fair valuation of their shareholding in Tata Sons Limited and other companies, by observing that this prayer could have been made only before the NCLT and the Supreme Court is only deciding the question of law in these appeals filed under Section 423 of the Companies Act and cannot enter into disputed questions of facts. 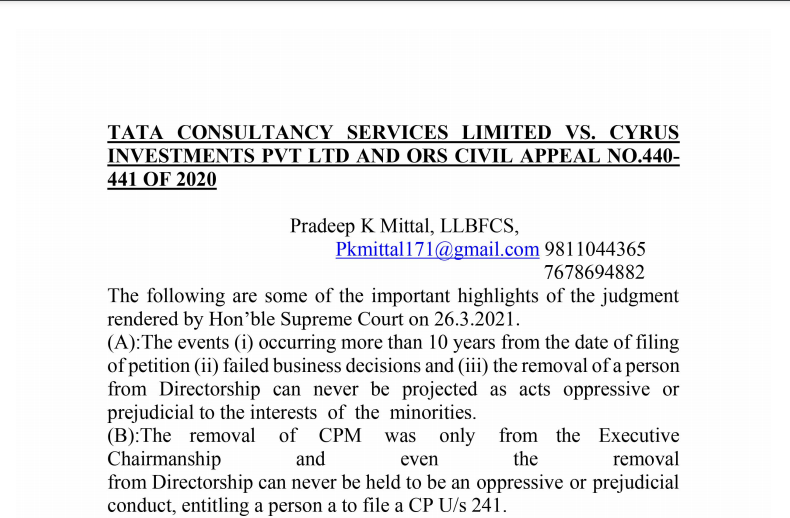 Tagged with: Highlights of Tata Sons Judgement
Discuss Now Opinions & information presented by ConsultEase Members are their own.

SC in the case of Amit Jain Versus Union of India

Keshvananda Bharti - 10 things you should know

SC in the case of Commissioner of Service Tax Versus M/s Adani Gas Ltd.

Debate on jurisdiction of Sushant's Case

Bench Has No Business to Make Any Adverse Commentor Uncharitable Remark on Any Other Judgment: S. Kasi Versus State

SC upholds Guj HC's judgment that agricultural land even by will cannot be transferred to non-agriculturists: Vinodcharndra Sakarlal Kapadia Versus State of Gujarat

SC in the case of Shakti Bhog Food Industries Ltd. Versus The Central Bank of India