Madras HC in the case of Deputy Commissioner of Income-tax Versus M/s.Hitachi Power

The 1st respondent/writ petitioner is a Company incorporated under the Laws of Germany engaged in the design and construction of fossil-fired power plants as also supplying key components such as utility steam generators, environmental engineering equipment, turbines, etc. During June 2010, the National Thermal Power Corporation Limited (NTPC) invited bids under International Competitive Bidding from eligible bidders for the supply and installation of 11*660MW steam generators at five places in India. The 1 st respondent/writ petitioner is stated to have worked as sub-contractor to BGR Energy Systems Limited (BGRE), who has been selected by NTPC as a contractor for the execution of the projects. The other finer details pertaining to the scope of the project may not be very relevant for the purpose of arriving at a decision in this appeal.

For all the above reasons, we find that the appellant-Revenue has not made out any ground to interfere with the order passed by the learned Single Bench.

Accordingly, the appeal filed by the appellant-Revenue is dismissed. The learned Single Bench fixed an outer time limit of twelve weeks for the Commission to pass orders. After the writ petition was allowed, the CIT had filed a report in terms of Rule 9 of the Income Tax Rules on 11.03.2020. Thereafter, on account of the Nationwide lockdown and the lockdown announced by the State of Tamil Nadu, the matter appears to have not proceeded further and the 1st respondent/writ petitioner approached the learned Single Bench by filing W.M.P.No.10334 of 2020 to extend the time period of twelve weeks’ prescribed in the order or fix some reasonable time. The Court taking note of the situation prevailing and also the fact that the Revenue intended to prefer a writ appeal against the order in the writ petition, directed the Settlement Commission to keep the matter in abeyance by the interim order dated 25.06.2020. Now, that we have dismissed the appeal filed by the Revenue, we direct the Settlement Commission to proceed in accordance with the law and take a final decision in the matter after affording the opportunity of hearing to the 1st respondent. We are not inclined to fix any time frame for the Settlement Commission to act and leave it to the Commission to decide the matter as expeditiously possible. Consequently, there will be no necessity for any further orders in W.M.P.No.10334 of 2020, which appears to be still pending. No costs. Consequently, the connected miscellaneous petition is closed. 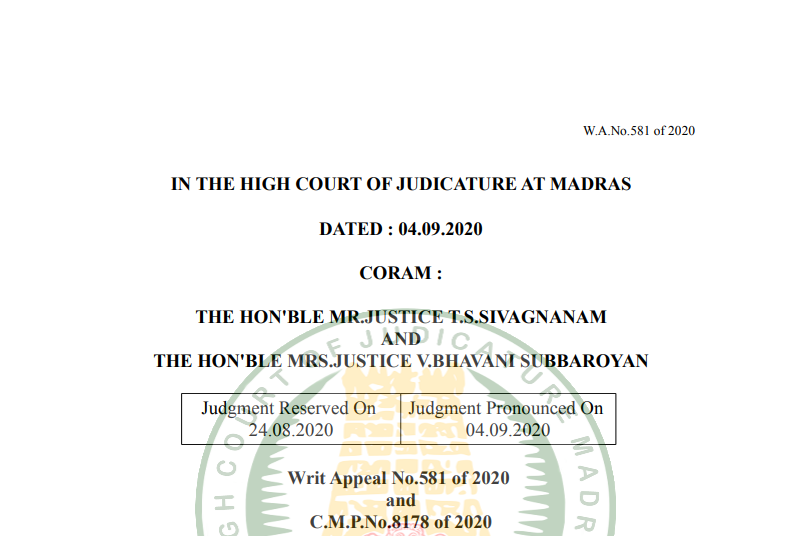 Tagged with: Madras HC in the case of Deputy Commissioner of Income-tax Versus M/s.Hitachi Power
Discuss Now Opinions & information presented by ConsultEase Members are their own.

Madras HC in the case of M/s. Gangotri Textiles Ltd.

Madras HC in the case of K.Devamani Versus Union of India

Madras HC in the case of M/s.P.R.Mani Electronics Versus Union of India

Request for Free e-book on GST