Karnataka HC in the case of M/s NMDC Vs. The Authority for Advance Ruling

The Authority for Advance Ruling

The date for the purpose of calculation of time barring shall be the date of the original order by AAR or the date of order of Rectification of mistake application.

Learned counsel for the petitioner has argued before this court that the AAAR has erred in law and facts in dismissing the appeal as not maintainable as it was filed beyond the period of 60 days. He has argued before this court that the order on the issue of the advanced ruling was passed on 21.09.2019 and the application for rectification for the advanced ruling was rejected on 23.03.2020 and therefore, keeping in view the doctrine of merger, the limitation should have been counted with effect from 23.03.2020. Hence the order passed by the AAAR deserves to be quashed. It has also been argued that even if there is a delay, this court under Article 226 of the Constitution of India can exercise extraordinary jurisdiction to condone such delay and the arguments can be canvassed on merits also.

Learned counsel for the petitioner also brought on record a Notification issued by the CBDT dated 03.04.2020. However, it is certainly not a Notification extending the period of limitation provided under the statute in respect of appeals. Reliance is also placed upon the judgment delivered by the Hon’ble Supreme Court in the case of Hind Wire Industries Ltd.

On the other hand, the learned counsel appearing for the respondents-State vehemently argued before this court that the petitioner before this court did file an application for grant of advanced ruling on to 27.8.2018 and the AAR has passed an order on 21.09.2019. He has further stated that the petitioner/appellant was under an obligation to file an appeal within 30 days keeping in view the statutory provisions under the CGST Act, 2017 and if it is not preferred within 30 days, an application under Section 5 of the Limitation Act should have been filed not beyond 60 days, as there is a bar to condone the delay beyond 60 days and no such appeal was maintainable. He has further argued that the petitioner has certainly filed an application for rectification of advanced ruling on 23.01.2020 and the same was disposed of by an order dated 23.03.2020 as there was no error apparent on the face of the record and therefore, the doctrine of merger does not take place. He has also argued that once the statute does not provide for condonation of delay beyond 30 days.

In the aforesaid case, there was no outer limit prescribed in the matter of limitation. In the present case, it has been provided under the statute that delay can be condoned only up to 30 days. In the considered opinion of this court, such application for rectification of the mistake was dismissed summarily there was no error apparent, hence, the doctrine of the merger has not taken place. Therefore, the judgment relied upon does not help the petitioner in any manner.

Reliance has also been placed upon the judgment delivered in the case of Tony Electronics Limited (supra). In the aforesaid case, the Delhi High Court has specifically held that the original order had merged with the order of the appellate authority’s order and accordingly, the limitation under subsection (7) of section 154 would be relevant for passing the order of rectification within the period of four years.

This Court has carefully gone through the aforesaid judgment and is of the considered opinion that the statute relating to delay under the Income Tax Act and under the CGST Act are not at all identical. It is provided categorically under the CGST Act that no delay can be condoned after the expiry of 30 + 30 days period. No such contingency was involved in the aforesaid case. Not only this, the doctrine of merger is not applicable in the facts and circumstances of the case. Hence, no relief can be granted on the basis of the aforesaid judgment.

Learned counsel has also placed reliance on the judgment delivered in the case of Rashtriya Ispat Nigam Limited. This court has carefully gone through the aforesaid judgment. However, again it was the case under the Income Tax Act. No outer limit in respect of limitation was provided under the statute as provided under the CGST Act. There cannot be a condonation of delay beyond the period of 60 days. Keeping in view the facts and circumstances of the case as the doctrine of merger is not at all applicable. Hence, the judgment relied upon is again is of no help to the petitioner.

The law of limitation is found upon maxims such as “Interest Reipublicae Ut Sit Finis Litium” which means that litigation must come to an end in the interest of society as a whole, and “vigilantibus non dormientibus Jura subveniunt” which means that the law assists those that are vigilant with their rights and not those that sleep thereupon. The law of limitation in India identifies the need for limiting litigation by striking a balance between the interests of the state and the litigant.

In the aforesaid case, the statute provided for condonation of delay which is not beyond 60 days. The Hon’ble Supreme Court has held that the delay cannot be condoned beyond 60 days and therefore, in the light of the aforesaid judgment, the question of condoning the delay beyond 30 days does not arise.

Resultantly, this court does not find any reason to interfere with the order passed by the AAR as the appeal itself was preferred beyond the expiry of the limitation period. The petition stands dismissed.

Application for Advance Rulings was made by the petitioner which was adjudicated by the AAR. Being Aggrieved with the decision the application for rectification of mistake was submitted u/s 102 of CGST Act which was finally ordered. Petitioner approached AAAR but the appeal was dismissed on the grounds of limitation.

Petitioner contended that the period should be calculated not from the date of original order but from the date of rectification of mistake order due to Doctrine of Merger but the Court denied to accept this argument and therefore has dismissed the petition. 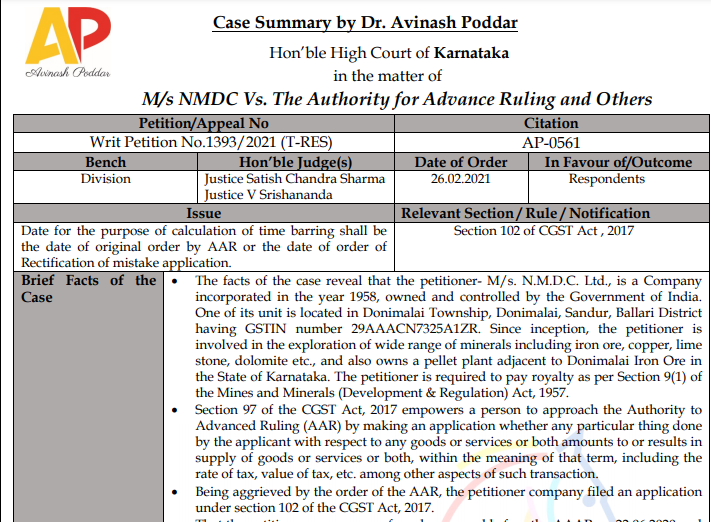 Tagged with: Karnataka HC in the case of M/s NMDC Vs. The Authority for Advance Ruling
Discuss Now Opinions & information presented by ConsultEase Members are their own.

Karnataka HC in the case of Mr. Virendra Khanna Versus State of Karnataka

Karnataka HC in the case of M/s. L & T Hydrocarbon Engineering Limited Versus State of Karnataka