The Authority for Advance Ruling

The facts of the case reveal that the petitioner- M/s. N.M.D.C. Ltd. is a Company incorporated in the year 1958, owned and controlled by the Government of India. One of its units is located in Donimalai Township, Donimalai, Sandur, Ballari District having GSTIN number 29AAACN7325A1ZR. Since its inception, the petitioner is involved in the exploration of a wide range of minerals including iron ore, copper, limestone, dolomite, etc., and also owns a pellet plant adjacent to Donimalai Iron Ore in the State of Karnataka. The petitioner is required to pay royalty as per Section 9(1) of the Mines and Minerals (Development & Regulation) Act, 1957.

Section 97 of the CGST Act, 2017 empowers a person to approach the Authority to Advanced Ruling (AAR) by making an application whether any particular thing done by the applicant with respect to any goods or services or both amounts to or results in a supply of goods or services or both, within the meaning of that term, including the rate of tax, the value of the tax, etc. among other aspects of such transaction.

This Court has carefully gone through the aforesaid judgment and is of the considered opinion that the statute relating to delay under the Income Tax Act and under the CGST Act are not at all identical. It is provided categorically under the CGST Act that no delay can be condoned after the expiry of 30 + 30 days period. No such contingency was involved in the aforesaid case. Not only this, the doctrine of merger is not applicable in the facts and circumstances of the case. Hence, no relief can be granted on the basis of the aforesaid judgment.

In the aforesaid case, the statute provided for condonation of delay which is not beyond 60 days. The Hon’ble Supreme Court has held that the delay cannot be condoned beyond 60 days and therefore, in the light of the aforesaid judgment, the question of condoning the delay beyond  30 days does not arise.

Resultantly, this court does not find any reason to interfere with the order passed by the AAR as the appeal itself was preferred beyond the expiry of the limitation period. The petition stands dismissed. 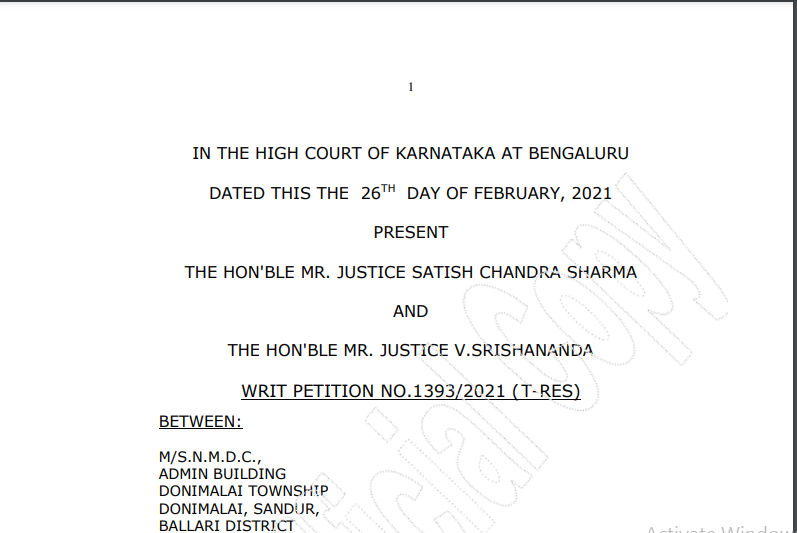 Tagged with: Karnataka HC in the case of M/s NMDC Versus The Authority for Advance Ruling
Discuss Now Opinions & information presented by ConsultEase Members are their own.

Karnataka HC in the case of M/s NMDC Vs. The Authority for Advance Ruling

Karnataka HC in the case of Mr. Virendra Khanna Versus State of Karnataka

Karnataka HC in the case of M/s. L & T Hydrocarbon Engineering Limited Versus State of Karnataka