1.   What is Intellectual Property Right?

1.1. As per the World Intellectual Property Organization (WIPO), Intellectual Property (IP) refers to creations of the mind, such as inventions; literary and artistic works; designs; and symbols, names, and images used in commerce. These usually take the form of Trademarks, Copyrights, Patents, and Industrial Designs, etc.

1.2. The term ‘Intellectual Property Right’ (IPR) has not been defined in GST Law. But as in the pre-GST regime, wherein a lot of ruckus over the definition of IPR was concerned hence the government vide the Circular MF (DR) circular No. B2/8/2004-TRU dated 10-9-2004 clarified the definition by stating that –

09. Intellectual property services (other than copyrights):

9.1 Intellectual property emerges from the application of intellect, which may be in the form of an invention, design, product, process, technology, book, goodwill, etc. In India, legislations are made in respect of certain Intellectual Property Rights (i.e.IPRs) such as patents, copyrights, trademarks, and designs. The definition of taxable service includes only such IPRs (except copyright) that are prescribed under law for the time being in force. As the phrase ‘law for the time being in force’ implies such laws as are applicable in India, IPRs covered under Indian law in force at present alone are chargeable to service tax and IPRs like integrated circuits or undisclosed information (not covered by Indian law) would not be covered under taxable services. Intellectual property rights are like any other property right. They allow creators, or owners, of patents, trademarks or copyrighted works to benefit from their work or investment in a creation.

1.3. ‘Intellectual Property Service’ is defined in Section 65(55b) of the Finance Act, as under:-

(a) Transferring temporarily or

(b) Permitting the use or enjoyment of any intellectual property right.

‘Intellectual property right’ is defined under section 65(55a) of the Finance Act, 1994 as “any right to intangible property namely, trademarks, design patents or any other similar intangible property, under any law for the time being in force, but does not include copyright”.

1.6. Permanent transfer of IPR is Goods: Intellectual Property Right is a property of a creator and if the creator permanent transfers the right on property, it is considered as a supply of Goods.

1.8. As per Para c of schedule II of the CGST Act, “Temporary transfer or permitting the use or enjoyment of any Intellectual Property Right (IPR)” is ‘supply of service’.

2.1 Although the classical theory regarding the goodwill and trademark says that, the two are inseparable but the contemporary law evolved to an extent that now a trademark is treated separately from goodwill and hence a trademark can be transferred with goodwill as well as without goodwill.

2.2 Goodwill is also an intangible asset that cannot be easily defined. In the words of Lord Macnaghten, in the case of Commissioner of Inland Revenue v, Muller & co’s Margarine Ltd can be described as “it is a thing very easy to describe, very difficult to define. It is the benefit and advantage of the good name, reputation and connection of a business. It is the attractive force which brings in customers. It is the one thing that distinguishes an old-established business from a new business at its first start. The goodwill of a business must emanate from a particular center or source. However widely extended or diffused its influence may be, goodwill is worth nothing unless it has the power of attraction sufficient to bring customers home to the source from which it emanates.”

2.3 As per The Indian Trade Marks Act, 1999 (hereinafter referred to as “Act”), a trademark can be assignable with or without the goodwill of the business either in respect of all the goods or services or part thereof. Indian law according to Sec. 37 of the Act recognize the right of the proprietor in trademark & in Sec. 38, 39 of the Act by which registered or unregistered trademark can be assignable and transmissible with or without goodwill subject to restrictions laid down in Sec. 40 of Trade Marks Act, 1999.

2.4 On the other hand, U.S. legislation under Sec. 10 of the Trademark Act (Lanhman Act) 1946, recognize the only assignment of the trademark with goodwill and assignment without goodwill is termed as an assignment in gross and invalid, therefore assignee acquires no rights in such transfer.

2.5 The transfer of proprietary rights in trademark is similar to any other asset, the difference, however, comes in reference to the goodwill attached to it. It is the goodwill that creates the value of a trademark and in the contemporary period, the same is also a separable part of the trademark. Goodwill provides bargaining power in the hand of the seller and therefore same is been recognized under the law in reference to the transfer of rights in a trademark. A trademark that is transferred with goodwill will get much higher value in comparison to the trademark which is transferred without goodwill.

3.1 India is a member to TRIPS and Article 21 of the TRIPS dealing with Licensing and Assignment mandates that:-

3.2 In Ramnik Vallabhdas Madhavani Vs. Taraben Pravinlal Madhvani reported in (2004) 1 SCC 497, it was observed by the Hon’ble Supreme Court that ‘the term goodwill signifies the value of the business in the hands of a successor, so far as increased by the continuity of the undertaking being preserved in the shape of the right to use the old name and otherwise. It is something more than a mere chance or probability of old customers maintaining their connection, though this is a material part of the practical fruits’.

Brief of the Case: –

Now said case gives the contrary view on the fact that goodwill and IPR are different from each other. That is because of the contention taken by the revenue, wherein it valued the goodwill on the basis of the fictitious fact that the surplus-value named as goodwill was considered as the part of the trademark license agreement. To buttress my view, In the case of COMMISSIONER OF INCOME TAX – IV VERSUS HINDUSTAN COCA-COLA BEVERAGES PVT. LTD. 2011 (1) TMI 30 – DELHI HIGH COURT Other Citation: [2011] 238 CTR, wherein Hon’ble High Court held that:-

“Regard being had to the concept of „goodwill‟ and the statutory scheme, the claim of the assessee and the delineation thereon by the tribunal are to be scanned and appreciated. The claim of the assessee-respondent, as is discernible, is that the assessing officer had treated the transactions keeping in view the concept of business or commercial rights of similar nature and put it in the compartment of intangible assets. To effectively understand what would constitute an intangible asset, certain aspects, like the nature of goodwill involved, how the goodwill has been generated, how it has been valued, an agreement under which it has been acquired, what intangible asset it represents, namely, trademark, right, patent, etc. and further whether it would come within the clause, namely, „any other business or commercial rights which are of similar nature‟ are to be borne in mind.”

Going through the case, it can be observed that, the AR could not prove the nexus of calculation of goodwill with the ‘Transaction value’ of Trademark but the AR emphasized the definition given for IPR in Service tax laws. Though there cannot be fictious calculation in the law, just to affirm the correctness of demand but there must be an affirmed view for such inclusion of the value of ‘goodwill’ in the valuation of IPR attached to it.

It is pertinent to note that, though the definition of Goodwill has not been provided in the GST laws, it has been decided by various courts that, the goodwill itself derives the value from the trademark or know-how of particular concern. As cited earlier that as per Indian laws, the assignment of the trademark can be with goodwill or without goodwill. Which gives us a prima facie view that goodwill is inseparable from any other assets falling under the preview of Intellectual property right. There might be different arrangements for calculations or agreements while transferring such IPR along with goodwill.

To place more reliance on the contention that goodwill and IPR are inseparable and goodwill to be considered as part of the IPR only, please refer below-mentioned case laws:-

Now, let’s discuss the concept of ‘Passing off’:

Passing off action depends upon the principle that nobody has a right to represent his goods as the goods of somebody else. That is, a man shall not sell his goods or services under the pretence that they were those of another person.

The modern tort of passing off has below-mentioned elements—

3.     to prospective customers of his or ultimate consumers of goods or services supplied to them;

4.     Which is calculated to injure business or goodwill of another trader (in the sense that this is a reasonably foreseeable consequence); and which causes actual damage to a business or goods of the trader by whom the action is brought or will probably do so.

Now it can be seen as in IPR lawsuits, wherein court observed that any sort of infringement suit, wherein there was a loss of ‘goodwill’ component as well along with particular IPR.

Hence I will conclude my view stating that Goodwill is to be considered as an IPR provided with a fact that IPR relates to a going concern entity. Because even if the value of IPR to which goodwill’s value is attached may be deteriorated but goodwill’s value cannot fall below zero. 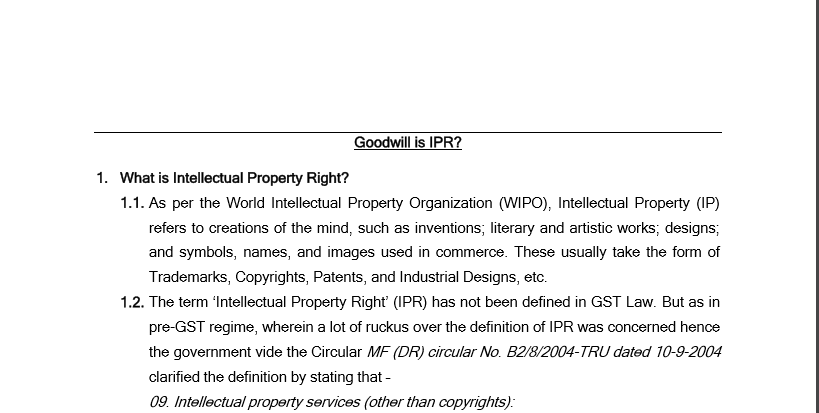 Tagged with: Goodwill is IPR?
Discuss Now Opinions & information presented by ConsultEase Members are their own.

Last date for April's return for some taxpayers

Sales Made in March, Due to Lockdown transaction cancelled in April