A. What it is about?

In a major relief to media company New Delhi Television Ltd (NDTV), the Supreme Court on 03.04.2020 allowed its appeal to quash the notice issued by the Income Tax Department seeking to re-open it income assessment for the financial year 2007- 08.

B. Background and Findings of Apex Court

1) The assessing officer had issued notices to NDTV under Section 148 of the Income Tax Act on the ground of escapement of income from assessment and proposing a substantial addition of Rs.642 crores to its account.

2) The SC held that these notices, which were issued in 2015, though disclosed reasons, were time-barred and hence unsustainable.

“We accordingly allow the appeal by holding that the notice issued to the assessee shows sufficient reasons to believe on the part of the assessing officer to reopen the assessment but since the revenue has failed to show non-disclosure of facts the notice having been issued after a period of 4 years is required to be quashed”, held the bench comprising Justices L Nageswara Rao and Deepak Gupta.

3) The Court however clarified that it has not expressed any opinion on whether on facts of this case the revenue could take benefit of the second proviso to Section 147 of the Act.

“..The revenue may issue fresh notice taking benefit of the second proviso if otherwise permissible under the law”, the Court said.

4) As per the second proviso, the time bar of 4 years for re-opening assessment as specified in the first proviso to Section 147 of the IT Act, is not applicable “in a case where any income in relation to any asset located outside India has escaped assessment for any assessment year”.

5) The Court however noted that the notices issued by the Department did not specify that it was proceeding under the second proviso.

“…the noticee or the assessee should not be prejudiced or be taken by surprise. The uncontroverted fact is that in the notice dated 31.03.2015 there is no mention of any foreign entity”,

6) Therefore, the Court expressed the view that that “the notice and reasons given thereafter do not conform to the principles of natural justice and the assessee did not get a proper and adequate opportunity to reply to the allegations which are now being relied upon by the revenue”.

THE IT DEPARTMENT TOOK THE STAND THAT THE NDTV HAD SUPPRESSED IN THE INCOME IT HAD RAISED IN 2007-08 THROUGH FOREIGN SUBSIDIARIES IN THE NETHERLANDS AND UNITED KINGDOM.

According to The Department:

1) The UK subsidiary of NDTV – NNPLC – had issued convertible bonds worth the US $ 100 million, which was possible only due to the guarantee issued by NDTV. The Department reasoned that NNPLC had no actual worth, and held that the transactions with the foreign subsidiaries were “sham transactions with a view to getting the undisclosed income”.

2) The final assessment order accepting the returns of the NDTV for 2007-08 FY was passed in 2012. Three years later, in March 2015, the revenue sent the first notice seeking to re-open the assessment for 2007-08 FY. This notice did not give any reasons. The assessee then asked for reasons and thereafter on 04.08.2015 reasons were supplied.

4) The attempt made by NDTV to challenge the reopening of assessment in Delhi High Court did not meet with success. The HC held that there was no “true and fair disclosure” and therefore held that the revenue could be taken the extended period of limitation of 16 years for initiating proceedings under the first proviso Section 147 of the Act.

5) Challenging the Delhi HC decision, it approached the SC.

6) The SC framed the following issues in the matter:

7) “At the stage of issuance of the notice, the assessing officer is to only form a prima facie view. In our opinion, the material disclosed in assessment proceedings for subsequent years was sufficient to form such a view. We accordingly hold that there were reasons to believe that income had escaped assessment in this case”, the bench said.

8) The revenue had argued that it can take the benefit of the extended period of limitation of 6 years for initiating proceedings under the first proviso Section 147 of the Act on the ground that the assessee had suppressed material information. This was rejected by the Court.

9) The SC also noted that before the HC, the Department had not raised the point of non-disclosure of facts by NDTV.

We are clearly of the view that the revenue in view of its counter affidavit before the High Court that it was not relying upon the non -disclosure of facts by the assessee could not have been permitted to orally urge the same. Even otherwise we find that the assessee had fully and truly disclosed all material facts necessary for its assessment and, therefore, the revenue cannot take benefit of the extended period of limitation of 16 years”.

10) The relief to NDTV was granted on the basis of the favorable findings on the third issue, which was answered as:

WE ANSWER THE THIRD QUESTION BY HOLDING THAT THE NOTICE ISSUED TO THE ASSESSEE AND THE SUPPORTING REASONS DID NOT INVOKE PROVISIONS OF THE SECOND PROVISO OF SECTION 147 OF THE ACT AND THEREFORE AT THIS STAGE, THE REVENUE CANNOT BE PERMITTED TO TAKE BENEFIT OF THE SECOND PROVISO”.

This Ruling by the Supreme Court quite engrossing in as much as the issue as to whether the taxpayer has failed to disclose fully and truly material facts relevant for making the assessment is quite subjective and is also essential for the assessing officer to assume jurisdiction for cases where Notice is issued after the expiry of 4 years from the end of relevant AY.

The Supreme Court also emphasized that the information which comes in the possession of assessing officer during the assessment of subsequent years or so can also form a valid ‘reason to believe’ for reopening an assessment. It is worth noting that the Ruling also explains that the taxpayer is only required to disclose the ‘primary’ facts that are relevant for making the assessment and is not required to disclose other facts that can be termed as ‘secondary’ facts.

Having said so, at the same time, Supreme Court has provided a gateway to the tax department to again issue Notice on the Taxpayer by taking benefit of the extended period of limitation of 16 years and thus, it would be interesting to see as to how such Notice is dealt with by the Taxpayer. 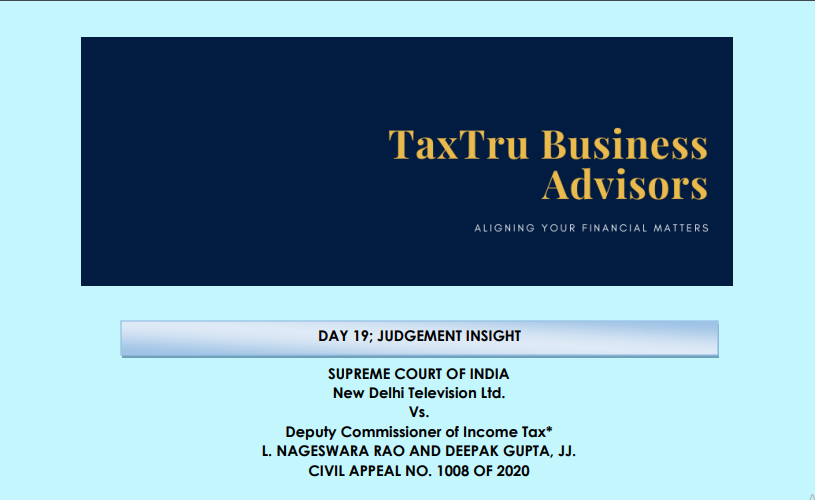 ITAT in the case of M/s. Bank of India Versus The Asst. Commissioner of Income Tax

ITAT in the case of DCIT Versus Five Star Construction P. Ltd.

CIC in the case of Rahmat Bano Versus The CPIO, O/o the Income Tax Officer

ITAT in the case of DCIT Versus M/s. Edgeverse Systems Ltd.

ITAT in the case of The Deputy Commissioner of Income Tax Versus M/s. EYBGS India Pvt. Ltd.

ITAT: Validity of a Notice issued to an amalgamating company which is no more existent.

In case of conflict, can the Provisions of Income Tax Act prevail over Accounting Standards ?

ITAT Delhi in the case of M/s. Divya Creations Versus The ACIT

Bombay HC in the case of Principal Commissioner of Income Tax Versus Alag Securities Pvt. Ltd.

Join our course starting from 27th April on Interpretation of statutes, Constitution and writ remedies in the context of Taxation laws by Adv. Vinay Shraff

No recovery from the Directors

SC decision in case of NDTV

HUF can't be taxed after partition

If AO has accepted the sale, the entire purchase can't be disallowed