Section 206AB changes as applicable from July 1, 2021 – Declaration on the filing of the tax return for past years and linking of PAN with Aadhaar

Government of India vide Finance Act 2021, has introduced a new section 206AB under the Act wherein a buyer is responsible to deduct TDS at a higher rate (i.e., twice the rate as specified under the relevant provision of the Income Tax Act or twice the rate/ rates in force; or at the rate of 5%whichever is higher) from the seller who is a specified person, in cases where any amount/ sum/ income is paid or payable or credited to the specified person:

1) who has not filed the returns of income for two assessment years immediately prior to the previous year in which tax is required to be deducted, for which the time limit of filing return of income under sub-section (1) of Section 139 of the Act has expired; and

2) where the aggregate of tax deducted at source and tax collected at source in the person’s case is INR 50,000 or more in each of these two previous years.

Accordingly, Buyer would have to deduct TDS at a higher rate in the case of a seller/vendor/supplier who has not filed income tax returns for the immediately prior two years and the aggregate of TDS and TCS in your case is more than INR 50,000 in each of the two years.

Note: The term ‘specified person’ doesn’t include a non-resident not having a permanent establishment in India but the explanation added to section 206AB states as under — “For the purposes of this subsection, the expression “permanent establishment” includes a fixed place of business through which the business of the enterprise is wholly or partly carried on.”

As per Section 139AA (2) of the Act, any person who has been allotted PAN as of 1 July 2017 and who is eligible to obtain an Aadhaar number has to link/ intimate his/her Aadhaar in the manner prescribed. Further, it is provided that if a person fails to link/ intimate his/her Aadhaar, his/her allotted PAN would be rendered inoperative, and it shall be deemed that he/she has not provided the PAN. If PAN is not linked with Aadhar within the prescribed date, you are required to deduct TDS at a higher rate as per income tax law. Refer to Annexure A & B enclosed.

Related Topic:
DIY: How to file TDS return without the help of any expert/software

Based on the above new provisions, it would be prudent to request all sellers/vendors/suppliers to provide the below declaration (along with supporting document) on their letterheads, so that the Tax Payer can apply the correct TDS rates as per provisions of the law:

<<Declaration format on the letterhead of Seller/Supplier/Vendors>> 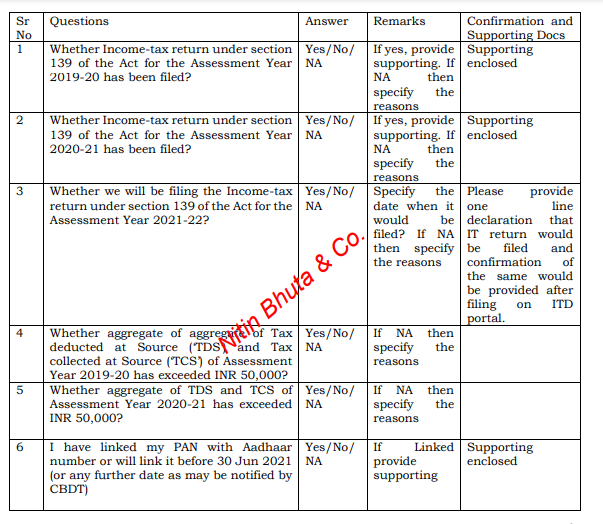 Note: Above is applicable to all other payments viz. -Section 206AB – notwithstanding anything contained in any other provisions of this Act, where tax is required to be deducted at source under the provisions of Chapter XVIIB of the Income Tax Act 1961.

We do hereby declare that to the best of my /our knowledge and belief what is stated above is correct, complete, and is truly stated. In case there is a tax liability, interest, or penal impositions which are levied on …………………………………………on account of this representation/ declaration, I/we undertakes to fully indemnify ………………. for the same. 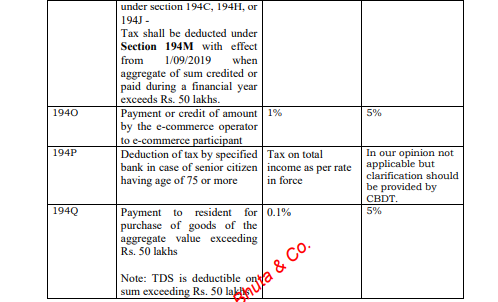 Note: Above mentioned provisions not applicable to the following sections -Section 192(Salary), Section 192A (Premature withdrawal from the accumulated balance of Provident Fund which is taxable in the employee’s hands.), Section 194B – Winning from the card game, crossword, lottery, puzzle or any other games, Section 194BB- Winning from a horse race., Section 194LBC- Income against investment in the securitization trust & Section 194N – Payments of certain amount/ amounts in cash and Non Residents in general.

Note: Above is applicable to all other payments viz. -Section 206AB – Notwithstanding anything contained in any other provisions of this Act, where tax is required to be deducted at source under the provisions of Chapter XVIIB of the Income Tax Act 1961.

Step 1: Log in to the Income-tax portal through login credential

Step 3: Select ‘Income-tax Returns’ from the drop-down and click on submit 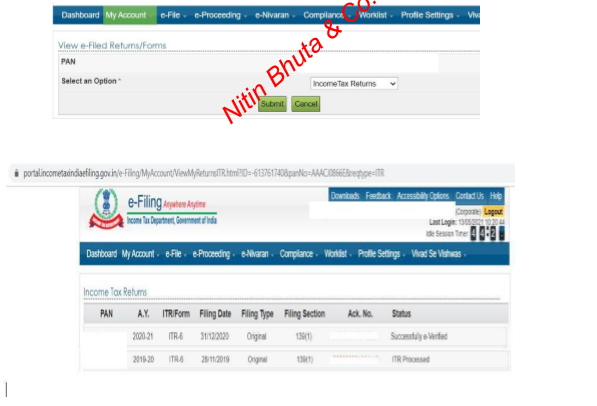 In my view, the objectives of introducing the above provisions are as under: –

1. to widen the tax base of compliant Taxpayers

2. to increase the revenue from tax collections from the Taxpayers who are complying with the tax provisions

3. to capture the details of the Taxpayers who are non-compliant and to initiate appropriate inquiries and look into the affairs of such taxpayers;

4. to increase the tax compliance monitoring;

5. To plug the revenue leakages in general; 6. to tackle the menace of fake and bogus transaction trails.

2. Will it increase the tax compliance in the hands of taxpayers?

Yes, it will increase in short term, but it would benefit all in the long run if the set objectives are achieved.

3. If the above provisions are not complied with by the Taxpayers, what would be the implications of such non-compliance?

If the above provisions are not complied with, the non-compliant Taxpayers would be termed as defaulters and consequentially, provisions pertaining to Demand and Recoveries along with short recovery of TDS, Interest and Penalties would be recovered as per the provisions of the Income Tax Act, 1961.

4. Will it impact genuine taxpayers either as recipients or as payers?

Initially, it will. However, in the longer long run, genuine taxpayers either as recipients or payers need not worry as the intention is to target non-compliers of law, so that they are compelled to streamline their compliance behavior.

5. If the Recipient has commenced the business for the first time, then whether the above provisions will impact their affairs?

Technically no, but we need to examine the new features of the ITD portal that would be introduced w.e.f June 7, 2021.

Technically no, but we need to examine the new features of the ITD portal that would be introduced w.e.f June 7, 2021.

7. TDS Returns filing utilities are to be made available from the quarter ending 30th September 2021. Will it provide the mechanism to verify such withholding tax compliance?

To my understanding, such an enabling, effective mechanism for compliance would be provided in the TDS Returns filing validation tool, so that all prima facie apparent issues are notified to the taxpayers.

8. Will TDS due date compliance provisions be rationalized or extended further due to introduction of the above changes?

Yes, I don’t see any due dates getting extended in the future unless practical difficulties prompt such extensions. We need to wait and watch for practical issues which emanate at the grass-root level.

9. Will the applicability of the above provisions be extended further?

We need to wait and watch based on practical issues at the grassroots level. I am sure CBDT will provide suitable clarifications for modifying/extending the scope.

10. If the PAN Number is disabled/cancelled/suspended due to non-linking of Aadhaar from July 1, 2021, what would be the implications?

• All Tax Payers would deduct the TDS @ 20% invariably;

• Such Taxpayers will not be able to file their Income Tax Returns as per the provisions of the Income Tax Act 1961 and consequential implications would arise.

• Such Taxpayers will not be able to trade on stock exchanges or invest in securities.

• IEC Number could be suspended.

• GST Number would be termed as invalid as PAN Number is cancelled;

• If such Taxpayers are carrying on business, then due to cancellation/suspension/disablement of PAN, even e waybills as per GST Act 2017 can’t be generated;

• Will result in not having an important proof to establish the identity of the person, a document which is used practically for various purposes by all.

• DIN Number allotted under Companies Act 2013 would be invalidated; similarly for Designated Partners of LLP.

11. If the PAN Number is disabled/cancelled/suspended due to non-linking of Aadhaar from July 1, 2021, can it be restored and revoked?

I am sure such a mechanism would be introduced with appropriate guidelines for restoration, as it has a significant impact on one’s affairs and has far-reaching implications.

12. Will such non-compliance result in disallowance of expenditure u/s 40(a)(ia) of the Income Tax Act 1961?

Yes, such non-compliance will result in disallowance of such expenditure & also while determining total Income u/s 28 of the Income Tax Act 1961 – relevant extract of section 40(a) is as under: –

(ia) thirty percent of any sum payable to a resident, on which tax is deductible at source under Chapter XVII-B and such tax has not been deducted or, after deduction, has not been paid on or before the due date specified in sub-section (1) of section 139 :

Provided further that where an assessee fails to deduct the whole or any part of the tax in accordance with the provisions of Chapter XVII-B on any such sum but is not deemed to be an assessee in default under the first proviso to sub-section (1) of section 201, then, for the purpose of this sub-clause, it shall be deemed that the assessee has deducted and paid the tax on such sum on the date of furnishing of return of income by the payee referred to in the said proviso.

Explanation. —For the purposes of this sub-clause, —

(i)  “commission or brokerage” shall have the same meaning as in clause (i) of the Explanation to section 194H;

(ii)  “fees for technical services” shall have the same meaning as in Explanation 2 to clause (vii) of sub-section (1) of section 9;

(iii) “professional services” shall have the same meaning as in clause (a) of the Explanation to section 194J;

(iv) “work” shall have the same meaning as in Explanation III to section 194C;

(vi) “royalty” shall have the same meaning as in Explanation 2 to clause (vi) of sub-section (1) of section 9;

Yes, auditors need to report such noncompliances in the audit reports and qualify the Independent Auditors report accordingly.

14. Do Tax auditors need to report such non-compliance in the Tax Audit reports of the company?

15. Will compounding and Penalty provisions would apply due to the above non-compliance?

Yes, Compounding and Penalty provisions would apply due to such non-compliance as per the provisions of the Income Tax Act 1961 under specified situations. 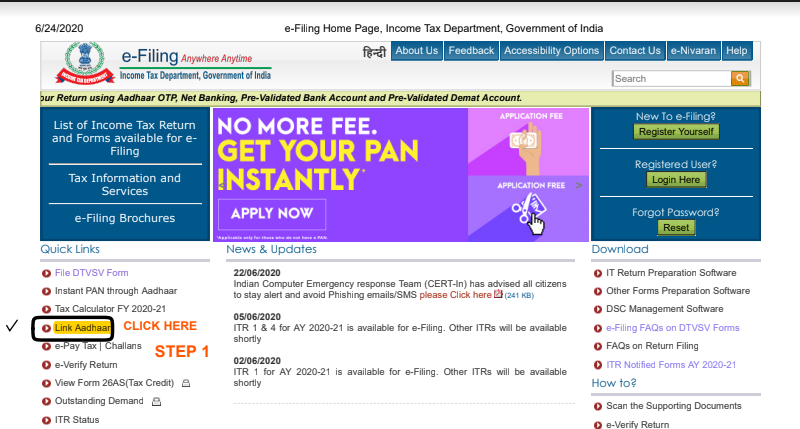 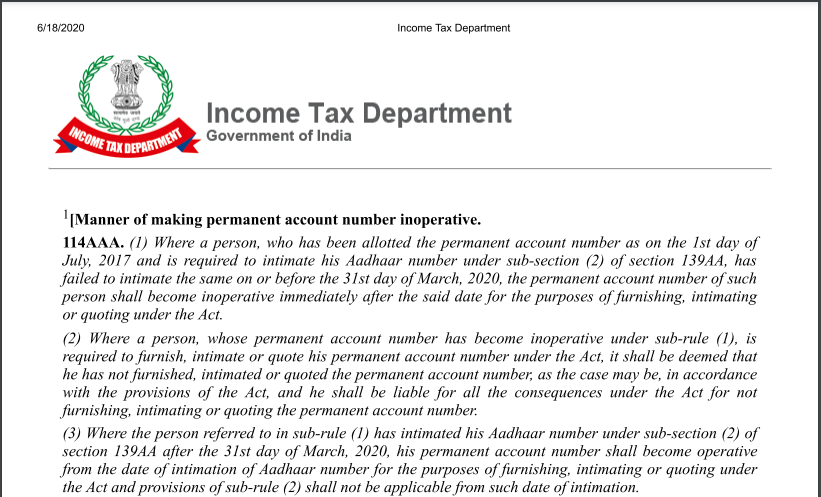