It is seen in the course of practice on the subject that during the course of Search and Seizure actions, voluminous documents are seized which may also include numerous loose papers, diaries, note pads which may contain rough calculations, vague notings, scribbling, and jottings, etc.

(i) Whether such document contains some transaction subjected to tax and consequently bears the tax liability.

(ii) If yes, taxability in whose hands?

(iii) The year of taxability of such income.

(iv) The rate and amount of tax

It is pertinent to mention that a charge of tax can be levied based on such a document only if such document is a speaking one in itself or becomes a speaking once if read in conjunction with some other corroborative evidence found during the course of search or post search investigation.

The well-settled legal position is that a nonspeaking document without any corroborative material, evidence on record, and finding that such document has materialized into transactions giving rise to the income of the assessee which had not been disclosed in regular books of account by such assessee, has to disregarded for the purposes of assessments to be framed pursuant to search and seizure action. From the search and seizure perspective, such non-speaking seized documents are referred to as ”Dumb Documents”.

Without prejudice to the above position though subject to distinguished facts and circumstances as may be there in some cases, the revenue wherein dumb documents have been surfaced pursuant to a search and seizure action, cannot seek to bring such document in the tax net by merely pressing into service Section 132(4A) of the read with Section 292C of the act. Section 132(4A) of the Act read with Section 292C creates a deeming fiction on the assessee subjected to search wherein it may be presumed that any such document found during the course of search from the possession or control of person searched shall belong to such person and contents of such documents are true. What has to be noted here is that mere deemed presumption can’t bring such a document in the tax net. Even otherwise, the presumption as casted by the legislature is a rebuttable one. Nevertheless, even if a deemed presumption is casted on an assessee by virtue of Section 132(4A) of the Act read with Section 292C, the taxability shall arise only on the passage of assessment orders ( Section 153A and 153C in search cases/proposed u/s 148 by virtue of Finance Bill 2021) and under relevant charging sections (such as Section 68, 69,69A,69B and 69C, etc.). Unless and until the contents of such a document and its character and nature per se fall under the category of income to be taxed under the charging Section 68, 69,69A,69B and 69C, the mere deemed presumption u/s Section 132(4A) of the Act read with Section 292C shall be of no help.

Having said so, the predominant judicial view is that no arbitrary addition to the income can be made by the Assessing Officer based on the dumb documents, loose papers containing scribbling, rough/vague notings in the absence of any corroborative material, evidence on record, and finding that such dumb documents had materialized into transactions giving rise to the income of the assessee which had not been disclosed in regular books of account by the appellant.

It shall not be out to place to mention that the Hon’ble Supreme Court in the case of K.P. Varghese v. ITO [1981] 24 CTR (SC) 358/[1981] 131 ITR 597 (SC) held that the fictional receipt cannot be deemed to be a receipt in the absence of any cogent material to support the factum of actual receipt. 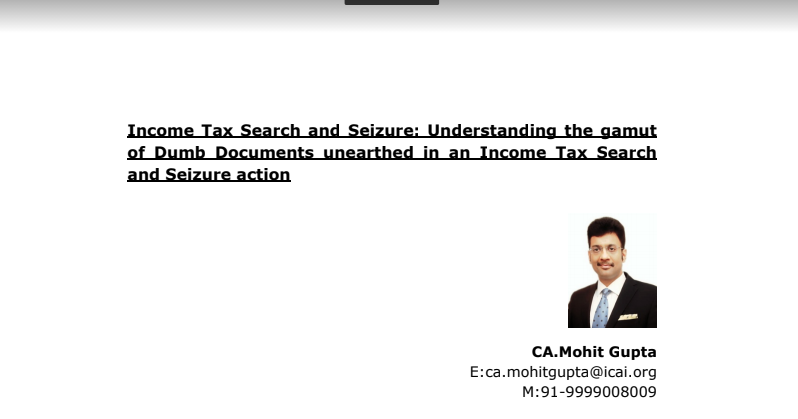