Authority and power to conduct search and seizure operations is strident and caustic power authorized by law to be taken recourse to when the conditions mentioned under different clauses of Section 132 (1) of the Act are satisfied.

The jurisdictional facts that have to be established before a search under Section 132 (1) of the Act can be authorized are that (i) the authority issuing the authorization is in possession of some credible information, other than surmises and conjectures (ii) that the authority has reason to believe that the conditions stipulated in clauses (a), (b) and (c) of Section 132 (1) qua the person searched exist; and (iii) the said information has nexus to such belief.

The law is well settled that a warrant of search and seizure under Section 132(1) can only be issued on the basis of some material or information on which the Commissioner/Director has reason to believe that any person is in possession of money, jewellery or other valuable articles representing wholly or partly income or property which has not been or would not be disclosed, under the IT Act. The satisfaction of the authorities under Section 132 must be on the basis of relevant material or information. The word used in Section 132(1) are “reason to believe” and not “reason to suspect”.

Having said so, the primary thrust of the Search and Seizure action is to collect evidence of tax evasion which otherwise could not have surfaced and brought to tax. Section 132(4) of the act has been put in place by the legislature consciously so as to enable the authorized officer to collect such evidence by recording statements during the course of the search. Section 132(4) of the act empowers the Authorized Officer, to examine and record a statement under oath of any person who is found to be in possession or control of any books of account, documents, money, bullion, jewellery or other valuable article or thing and any statement made by such person during such examination may thereafter be used in evidence in any proceeding under the Indian Income-tax Act, 1922 (11 of 1922), or under the Income Tax Act’1961.

“Explanation.—For the removal of doubts, it is hereby declared that the examination of any person under this subsection may be not merely in respect of any books of account, other documents or assets found as a result of the search, but also in respect of all matters relevant for the purposes of any investigation connected with any proceeding under the Indian Income-tax Act, 1922 (11 of 1922), or under this Act.”

Here, it would be relevant to point out that the statements u/s 132(4) are recorded by administering oath which is presumed to be carrying truth in view of the provisions of section 181 and section 193 of the Indian Penal Code which provide for imprisonment if a false statement is given.\

Related Topic:
Search and Seizure Operations:- Forced confession of undisclosed income in the statement recorded u/s 132(4) of the act during search and seizure operations

Therefore there is considerable importance of statements recorded u/s 132(4) during search and seizure operations, which is clear from the intent of Legislature as it thought fit to include a separate sub-section 132(4) for the recording of statement during a search operation. However, it is furthermost pertinent to mention here is that the words ‘may be used in evidence in any proceedings’ appearing in section 132(4) are of great significance. The Legislature seems to be aware that some admissions may be made at the time of search which may be true, but for which sufficient corroborative evidence may not be found.

The word ‘statement’ is defined neither in the Income-tax Act nor in the Indian Evidence Act, and, hence, it assumes its dictionary meaning of ‘something that is stated’. 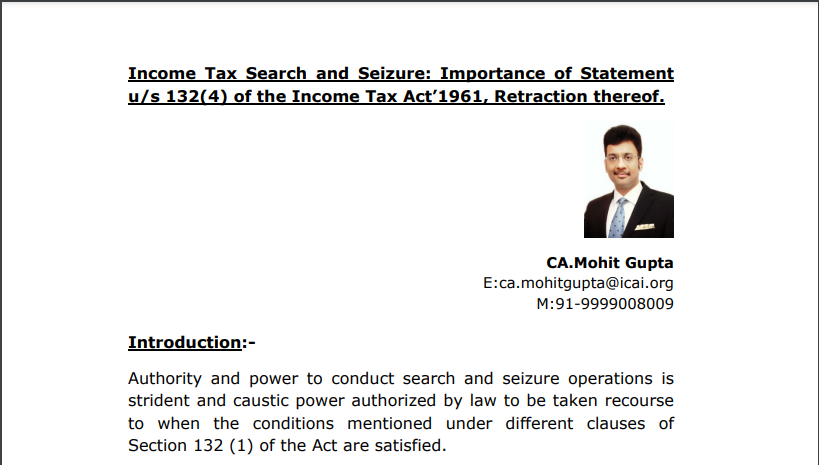 
Refund of ITC on export without payment of IGST