Information received from external agencies or other departments. Based on such information received, the information and records already in possession, and by application of his mind, the AO have to form a reasonable belief that whether the escapement of income from assessment has occurred for the purpose of initiating proceedings u/s 147 of I.T Act, 1961 or not. Reasons to Believe means there should be justifications or cause to believe and not merely a subjective satisfaction.

Reasons to Believe although is the state of mind either to accept or reject to initiate the assessment proceedings u/s 147, however such reasons to belief must be based on the material, information, and records in the possession of the assessing officer.

If there are Gaps or Deficiencies in the Information or Cogent material or the information is not sufficiently available it cannot be filled with surmises, assumptions, and presumptions to form a reasonable belief.

Reasons virtually the Lifeblood of judicial decision making justifying the principle that reason is the soul of justice. Insistence on reason is a requirement for both judicial accountability and transparency.

Information relied upon must be Specific and Not Vague

Information based on which the AO has to rely for the formation of belief must not be vague or irrelevant but must be specific.

If the information received itself is vague, no reasons to believe can be formed about the escapement of the income from assessment.

The information must contain

a. Name of the Parties from whom the amount has been received.

b. The amount which has been received

c. The nature of the transactions d. Mode of Payment

Unless all the above ingredients are not available, it would not be even take a possible view of the escapement of the income from assessments.

Hence the information on which the AO has to rely must be specific.

Information relied upon by AO must be factually correct

Proper Officer is a Quasi-Judicial Authority

Further, even the AO merely relied on the information received from the other department without considering and making the analysis of the information would be deemed as nonapplication of mind.

AO is a Quasi-Judicial authority which means he although not a judiciary but resembles that of the judge in a Court. Judges before coming to the formation of the belief or coming to conclusion rely on the information and facts available. He owns in own application of the mind draws the conclusion and not being influenced by either of the parties. A quasi-judicial authority must record reasons in support of its conclusions.

Reasons to Believe to be recorded in Writing

Reason to Believe leading to the escapement of the income from assessments must be recorded. Recoding of the reasons is necessary so that there is not abuse to the discretionary power given to the officer. Further such recorded reasons also necessary for the Judicial Review as when required. Judiciary only after analyzing the recorded reasons can come to conclusion that whether there was an arbitrary and unreasonable exercise of power.

Reasons to Believe once recorded by the Proper Officer and actions has been initiated based on such reasons to believe can neither be deleted nor the additions can be added. Interpretation can only be drawn for the reasons recorded and not on which the reasons not recorded.

Further, if the assessee has given certain objections in the context of the reasons to believe, the assessing officer shall proceed to commence the proceedings only after the disposal of the objections by a written order and such shall be a speaking order and not merely the proper officer showing his dissatisfactions over the objections. Reasons should be clearly stated for not accepting the objections.

In English v. Emery Reimbold and Strick Limited, (2002) 1 WLR 2409, it has been held that justice will not be done if it is not apparent to the parties why one has won and the other has lost. 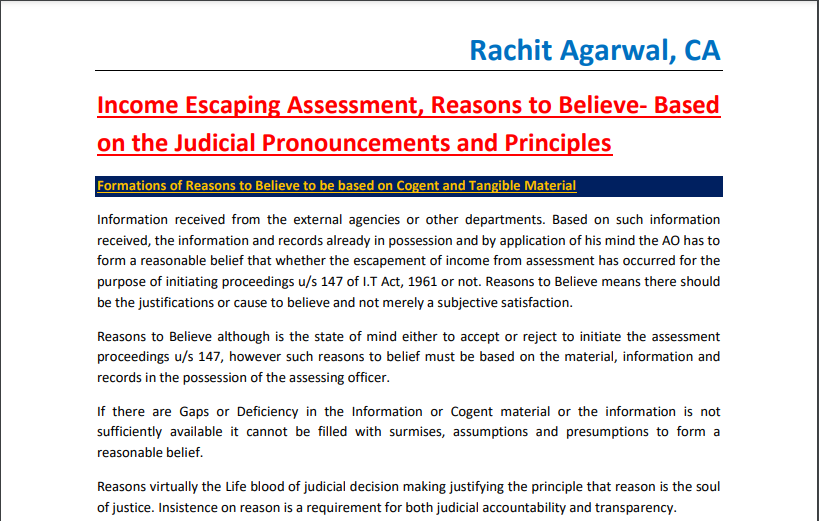