Any order passed based on the assumptions and presumptions without any cogent reason would be treated as an Arbitrary Order. It is whether Assessing Officer or the Assessee must reach to the conclusion of the case only after all the facts are available and not on the basis of some facts which are not available. In Taxing Statute, there is no space for presumptions and assumptions.

Illustration of Presumptions and Assumptions as follows :

(1) If there is excess Consumption of Electricity per metric ton of Iron/Steel, it presumed that the production has been suppressed –

Hon’ble High Court at Allahabad in case of Commissioner of C. Ex., Meerut-I v. R.A. Castings Pvt. Ltd. [2012 (26) S.T.R. 262 (All.)] The Tribunal observed that it is settled principle of law that the electricity consumption cannot be the only factor or basis for determining the duty liability, that too on an imaginary basis, especially when Rule 173E mandatorily requires the Commissioner to prescribe/fix norm for electricity consumption first and notify the same to the manufacturers and thereafter ascertain the reasons for deviations, if any, taking also into account the consumption of various inputs, requirements of labour, material, power supply and the conditions for running the plant together with the attendant facts and circumstances. We are of the view that the findings of the Tribunal are based on the material on record and they cannot be said to be without any material and perverse.

(2) If the capacity of the Machines are under-capacity, it is presumed that production has been suppressed.

CESTAT Principal Bench, New Delhi in case of Kuber Tobacco Products Ltd. v. C.C.E. Delhi [2013 (290) E.L.T. 545 (Tri. – Del.)] SLP filed has been dismissed – [Kuber Tobacco Products Pvt. Ltd. v. Commissioner – 2015 (317) E.L.T. A159 (S.C.)] – Demand could not be confirmed on the assumption that factory was continuously running for 3 shifts/less machines declared/unaccounted manufacture/actual production grossly suppressed, etc. There were 137 machines and production was estimated on the basis of the production capacity of these machines.

(3) If the per-unit consumption of raw material is high, the production has been suppressed.

(4) Stock Yield cannot be the basis of Suppression of production.

Hon’ble High Court for Rajasthan in case of C.C.E & S.T. Udaipur v. Mittal Pigment Pvt. Ltd. [2018 (16) G.S.T.L. 41 (Raj.)] – The evidence in the form of approximation and averaging production as 77.6% and one statement of Shri Agarwal, Director of the appellant company cannot be called a prudent conclusion of the production estimate.

(5) If there is excess consumption of packing material, it is presumed that there is Clandestine removal of goods.

(7) Private Records containing the details of the removal of goods.

CCE v. Arsh Casting Pvt. Limited [2010 (252) E.L.T. 191 (H.P.)], the Hon’ble High Court of Himachal Pradesh held that the private records maintained by the staff of the company cannot be made as the sole evidence to hold that clandestine removal of the goods.

CESTAT Principal Bench, New Delhi in case of Kuber Tobacco Products Ltd v. C.C.E. Delhi [2013 (290) E.L.T. 545 (Tri. – Del.)] SLP filed has been dismissed [Kuber Tobacco Products Pvt. Ltd. v. Commissioner – 2015 (317) E.L.T. A159 (S.C.)]The Appellate Tribunal in its majority order had held that in the seizure of documents, loose papers were produced without any “written pages”. Author of kachha records, loose sheets, hisab books, challans not traced and unavailable for cross-examination and also the documents were not recovered from office or factory/premises of the assessee. Charge of clandestine removal not sustainable.

(8) If Way bill has not been generated, it is presumed that Tax Invoice may be used multiple times for the removal of goods.

(9) If there is a time lag between the date of issue of invoice and data of way bill, it presumed that assessee might be engaged in evasion of tax.

(10) If there is a difference in GSTR 3B and GSTR 2A, it is presumed that tax has not been paid with respect to Input Tax Credit availed. Tax Payment is a condition for availing the credit of the Input Tax u/s 16(2)(c) of the CGST Act, 2017.

(11) If there is a difference in the details of supplies as per GSTR 2A and the Input Tax Credit claimed in GSTR 3B, it is presumed that there is no payment of tax or credit has been availed without Invoice.

Reasons for the difference could be many as follows :

(a) Suppliers of the goods have disclosed the Invoice under table B to C instead of B to B.

(b) Registered Person has disclosed the ITC related to Imports in column “All Other ITC” resulting in the gap between GSTR 3B and GSTR 2A.

(c) ITC related to a Financial Year has been claimed in the succeeding Financial Year. Hence the comparison of ITC claimed in GSTR 3B with details of supplies in GSTR 2A shall give the absurd figure.

(d) ITC related to a month has been claimed in succeeding months.

(e) Supplier has reported his Tax Invoice in a tax period other than the tax period where it is required to be reported.

(f) Registered has first claimed the ITC, however, the said ITC has been reversed as the consideration has not been paid and subsequently claimed the ITC upon the payment of the consideration amount. Here the ITC has been reported two times, hence the officer may club both the amount for comparing with the supplies reported in GSTR 2A if the officer is not aware of such facts. Officer may draw the conclusion until the notice has been issued.

Various Analytical Tools are being used and actions are being initiated on the assumption that the tax has not been paid as there is a difference between GSTR 3B and GSTR 2A. These actions are not always reasonable. 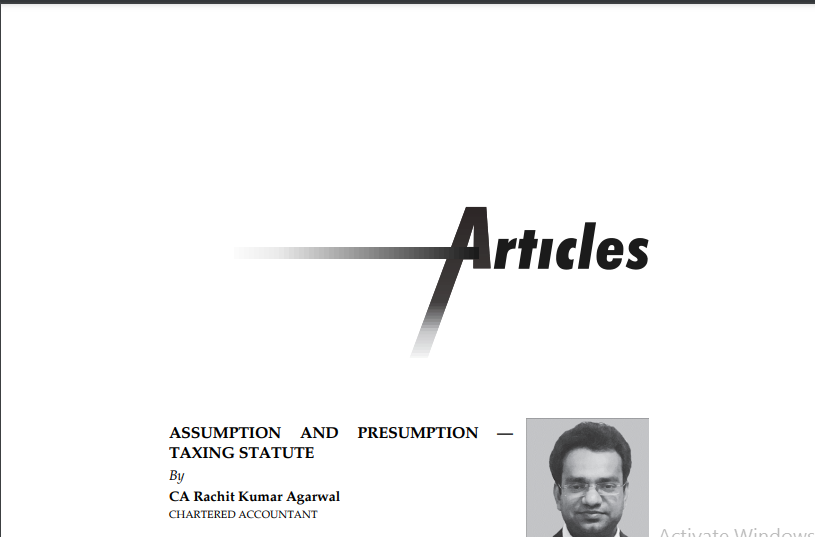 
Applied for Manufacturing GST registration but using for E-commerce