The term “money laundering” is said to have originated from the Mafia ownership of Laundromats (a self-service laundry service mark Laundromat) in the United States. Drug lords and gangsters in the 1950s showed the illegally earned money from a legitimate source by purchasing outwardly legitimate businesses to mix their Illicit earnings with the legitimate earnings they received from these businesses and thus the word ‘ Laundering emerged ‘.

The original sighting was in newspapers reporting the Watergate scandal in the United States in 1973. The expression first appeared in a judicial or legal context in 1982 in America essentially in a drug trafficking context.

In Black’s Law of Lexicon “the term laundering is referred to as investment or other transfer of money flowing from racketeering, drug transactions, and other sources (illegal sources) into legitimate channels so that its original source cannot be traced.”

In common parlance, Money laundering is the process by which the proceeds of the crime and the true ownership of those proceeds, are concealed or made opaque so that the proceeds appear to come from a legitimate source thus making “dirty” money appear “clean”.

Money laundering washes the dirt off from the money/proceeds or profits generated from:

9. Illegal sale of wildlife products and other specified predicate offenses

Though the term “money laundering” was invented in the 20th Century, the activity of money laundering has been around far longer. Sterling Seagrave in his book Lords of the Rim provides a roundup of the history of the Overseas Chinese. He explains how the abuse of merchants and others by rulers led them to find ways to hide their wealth, including ways of moving it around without being identified and confiscated. Money laundering in this sense was prevalent 4000 years before Christ.

Money laundering is called what it is because that perfectly describes what actually happens: illegal or dirty money is put through a cycle of transactions, or washed so that it comes out from the other end as legal or clean money. In other words, the source of illegally obtained funds is obscured through a succession of transfers and deals in order that they can eventually be made to appear as legitimate income.

Almost a century ago, alcohol was prohibited in the U.S. There were many criminal gangsters who manufactured and distributed alcohol. One of the most famous Chicago gangsters was Al ‘Scarface’ Capone. Contrary to popular belief, Capone was not a part of the Mafia. He actually spent his entire life fighting the Mafia. He had never worked in the U.S. military.

He was such a nuisance that President Herbert Hoover declared him Public Enemy No. 1 and ordered action against him. Several Government Departments, including the Income Tax department, went after him.

Systematic money laundering was unknown in those days, for it was quite a simple process. The money launderers simply picked up bagfuls of loose notes from retail dealers and deposited them in the nearest banks. The banks did not ask any questions. They were only too happy to receive huge sums of money.

Capone claimed that he was earning less than 5,000 USD a year, the threshold limit for paying Income Tax; that his income was not taxable and therefore he was not required to file any returns of income nor required to pay any taxes. Capone did not have a bank account or any investment in his own name.

Systematically and laboriously, Federal Agent Frank J. Wilson collected details of Capone’s expenses. At the end of it, Capone was charged and tried for evasion of Income Tax. In spite of persistent threats to the jurors and bribery offers, resulting in a last-minute change of the entire jury, Capone was found guilty on all counts.

In October 1931, Capone was sentenced to 11 years imprisonment and a fine of 50,000 USDs, – the severest punishment till then imposed for a tax offence. His appeals were dismissed and he spent his term in the infamous Alcatraz prison in St. Francisco Bay. Capone’s conviction made it clear that even earners of illegal income have to properly plan their tax affairs. His conviction paved the way for modern money laundering.

Prohibition was lifted in 1933. By this time, Capone, who was in prison, had been replaced by his friend, the Sicilian Charlie ‘Lucky’ Luciano. Luciano befriended Meyer Lansky, a Jew, who originated modern money laundering techniques.

In the 1950s, Senator Estes Kefauver’s Special Senate Committee on Organized Crime held a series of televised hearings, which, for the first time, made the public aware of the existence of the worldwide criminal syndicate, which came to be known as the Mafia. The identities of a number of its leading members also became public knowledge. This led to the passing of the Narcotics Control Act in 1956.

The world’s biggest drug traffickers met in the Grand Hotel, Palermo from October 10 to 14, 1957 to work out new strategies. From this date, money laundering changed from an unstructured series of unrelated events to a sophisticated, organized and institutionalized system of alternate financial management, as we know it now.

By 1970, money laundering had become a serious problem. The U.S. Government passed The Currency and Foreign Transactions Reporting Act of 1970 requiring all banks to report cash transactions in excess of $ 10,000 a day (the original limit was $ 1,000). Individuals carrying more than $ 5,000 across the border were required to submit similar reports.

But in practice, these provisions were breached with impunity by simply splitting the transactions to below $ 10,000, a process called smurfing.

In 1986, the US Government made attempts to avoid the reporting requirements a distinct criminal offence.

Ironically, one of the methods of concealing the source of money was legal gambling. The major headache that gangsters faced was that the money was in cash, often in small denomination coins. If the coins were put into the bank, questions would be asked. And the storage of large amounts of money in low-value coins is a storage nightmare. So they created businesses, slot machines and laundries. That is how the term “money laundry” was born.

Money laundering means different things in different countries. This is because only proceeds of crime (or criminal conduct) can be laundered. Also, many countries have restricted the classification of crimes that are regarded as underlying crimes for money laundering. In some countries, any criminal activity for which, if a person were convicted would lead to a sentence of imprisonment will be regarded as a predicate crime, whilst in others, only offences described in a list are to be regarded as creating “dirty money”. A further twist is that some countries will allow a person to be
prosecuted for laundering the proceeds of criminal conduct overseas, provided the conduct would have been criminal in both countries.

In most countries that have counter-money laundering laws, a person can be guilty of the offence of laundering the proceeds of someone else’s criminal conduct. Many countries have laws that make laundering a continuing offence and the date of the predicate crime is irrelevant. Also, many countries have changed the law recently in two important ways.

The first is to include a provision for a person to be guilty of money laundering if there is a “reasonable cause for suspicion”. That means that a Court can infer that the person knew or ought to have known that the money was, or was likely to have been, the proceeds of criminal conduct.

The second is to include a provision that it is an offence to be involved in laundering type transactions where the money is intended by someone else to be used in the preparation for or execution of a crime. 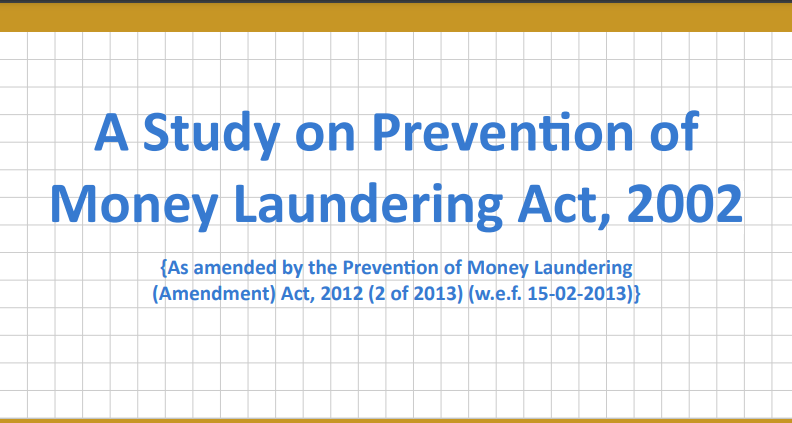 Tagged with: 2002: ICAI A Study on Prevention of Money Laundering Act
Discuss Now Opinions & information presented by ConsultEase Members are their own.

Granting of Breathing Space for Compliance by Stakeholders

UGC to consider CA/CS/ICWA qualification equivalent to PG Degree for appearing in UGC-Net.

Technical Guide on the Provisions of Independent Directors with Corporate Governance Perspective: ICAI

Handbook on Returns and Payments under GST: ICAI

Handbook on Liability to Pay in Certain Cases under GST: ICAI

Handbook on Finalisation of Accounts with GST Perspective: ICAI

Mandatory validation of UDIN in all Income Tax Forms: ICAI

Waiver of Condonation Fees by ICAI

Representation for Extension of Due Date of Annual Return and Audit: ICAI

Technical Guide on Easy Incorporation of Companies through SPICE+: ICAI

How to generate bulk UDIN on ICAI portal?

8 tips on how to grow your CA firm Practice


Not registered in GST