Revenue has preferred this appeal projecting the following question as a substantial question of law:

“Whether on the facts and in the circumstances of the case and in law, Tribunal is justified in restricting the disallowance to 5% of the gross purchases when it is established that none of the supplier parties are in existence and the assessee has just taken accommodation entries without getting actual supplies from the said parties?”

On thorough consideration of the matter, we do not find any error or infirmity in the view taken by the Tribunal. The lower appellate authorities had enhanced the quantum of purchases much beyond that of the Assessing Officer i.e., from Rs.24,18,06,385.00 to Rs.65,65,30,470.00 but having found that the purchases corresponded to sales which were reflected in the returns of the assessee in sales tax proceedings and in addition, were also recorded in the books of accounts with payments made through account payee cheques, the purchases were accepted by the two appellate authorities and following judicial dictum decided to add the profit percentage on such purchases to the income of the assessee. While the CIT (A) had assessed profit at 2% which was added to the income of the assessee, Tribunal made further addition of 3% profit, thereby protecting the interest of the Revenue. We have also considered the two decisions relied upon by learned standing counsel and we find that facts of the present case are clearly distinguishable from the facts of those two cases to warrant the application of the legal principles enunciated in the two cited decisions.

In Bholanath Polyfab Limited (supra), Gujarat High Court was also confronted with a similar issue. In that case, Tribunal was of the opinion that the purchases might have been made from bogus parties but the purchases themselves were not bogus. Considering the fact situation, Tribunal was of the opinion that not the entire amount of purchases but the profit margin embedded in such amount would be subjected to tax. Gujarat  High Court upheld the finding of the Tribunal. It was held that whether the purchases were bogus or whether the parties from whom such purchases were allegedly made were bogus was essentially a question of fact. When the Tribunal had concluded that the assessee did make the purchase,  as a natural corollary, not the entire amount covered by such purchase but the profit element embedded therein would be subject to tax.

We are in respectful agreement with the view expressed by the Gujarat High Court.

Thus, we do not find any merit in this appeal. No substantial question of law arises from the order passed by the Tribunal. Consequently, the appeal is dismissed. However, there shall be no order as to cost. 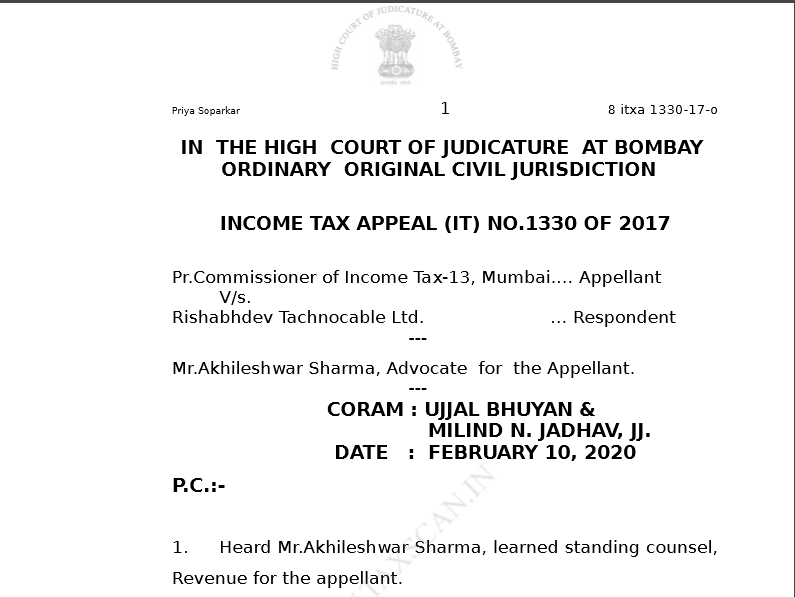 Tagged with: Bombay HC in the case of PCIT Versus Rishabhdev Tachnocable Ltd.
Discuss Now Opinions & information presented by ConsultEase Members are their own.