The applicant was arrested on 09.12.2020, for the allegations of total evasion of GST and disposing of the manufactured goods without showing any record about its manufacturing activity and has applied for regular bail.

• The applicant is in jail since 09.12.2020, investigation is concluded, and a charge sheet is also filed.

• Submission of learned advocate for the applicant that the applicant is in custody for a period of 58 days and within a couple of days statutory period would be over, following which the applicant will, in any case, be entitled to default bail.

• That the Apex Court, in the case of his brother Ratankumar Makhija who is the proprietor of the firm, while issuing notice vide order dated 01.02.2021 has ordered no coercive steps be taken against him.

• As far as the deposit an amount of 10% before the trial Court, learned advocate for the applicant, under the instructions, states that he has no instructions to make any such deposit.

Learned Advocate appearing on behalf of the applicant submits that considering the nature of the offense, the applicant may be enlarged on regular bail by imposing suitable conditions.

Learned APP appearing on behalf of the respondent-State has opposed the grant of regular bail looking to the nature and gravity of the offense.

Learned Additional Solicitor General Mr. Devang Vyas appearing for respondent No.2 states that the applicant is the defacto owner of the company and the brother is only camouflage. It is submitted that it is a case of total evasion of GST and disposing of the manufactured goods without showing any record about its manufacturing activity and clandestine purchase of such products without paying of any GST has resulted in evasion to the tune of Rs.9 Crores and odd. It is submitted that before the Sessions Court, the applicant had made an offer to deposit an amount of 10% of the tax evaded, and therefore, the applicant must be directed to comply with such commitment given to the trial Court.

In the facts and circumstances of the case and considering the nature of the allegations made against the applicant in the FIR, without discussing the evidence in detail, prima facie, this Court is of the opinion that this is a fit case to exercise the discretion and enlarge the applicant on regular bail.

Hence, the present application is allowed. The applicant is ordered to be released on regular bail in connection with F.No.DGGI/AZU/12(4)284/2020-21 dated09.12.2020, on executing a personal bond of Rs.10,000/-(Rupees Ten Thousand only) with one surety of the like amount to the satisfaction of the trial Court and subject to the conditions that he shall;

(a) not take undue advantage of liberty or misuse liberty;

(b) not act in a manner injurious to the interest of the prosecution & shall not obstruct or hamper the police investigation and shall not to play mischief with the evidence collected or yet to be collected by the police;

(c) surrender passport, if any, to the Trial Court within a week;

(d) not to leave India without prior permission of the Trial Court concerned;

(e) mark presence before the Investigating Officer _once in a month till the investigation is going on between 11.00 a.m. and 2.00 p.m.;

(f) furnish the present address of his residence to the Investigating Officer and also to the Court at the time of execution of the bond and shall not change the residence without prior permission of Trial Court;

The authorities will release the applicant only if he is not required in connection with any other offense for the time being. If the breach of any of the above conditions is committed, the Sessions Judge concerned will be free to issue a warrant or take appropriate action in the matter.

Bail bond to be executed before the lower court having jurisdiction to try the case. It will be open for the concerned Court to delete, modify and/or relax any of the above conditions, in accordance with the law.

At the trial, the trial Court shall not be influenced by the observations of preliminary nature qua the evidence at this stage made by this Court while enlarging the applicant on bail.

The rule is made absolute to the aforesaid extent.

The applicant has applied for regular bail for the allegation of tax amount of Rs.94.53 Crore for total evasion of GST and disposing of the manufactured goods without showing any record about its manufacturing activity and clandestine purchase of such products without paying off any GST on it.

Views of Author:
In this case, the Hon’ble court has granted regular bail with certain conditions. 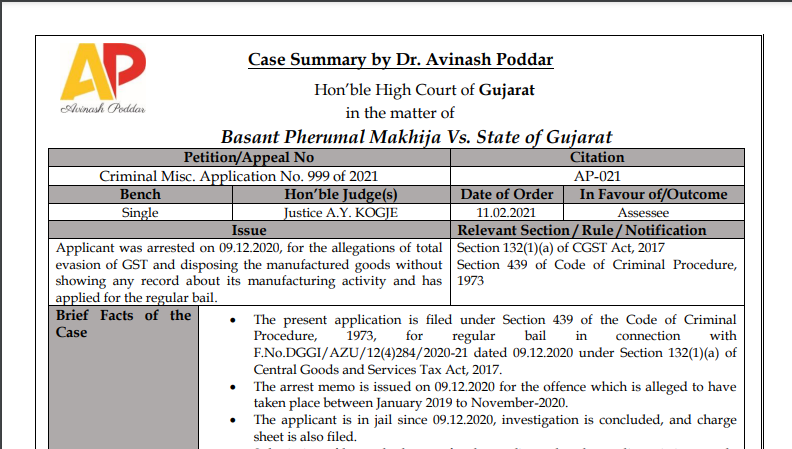