The Principal Commissioner of Customs

• Petitioner is engaged in the manufacture of lead sulphate. The writ applicant claims that it is eligible for the IGST refund claim on the basis of the shipping bills i.e. on the export of goods. According to the writ applicant, the shipping bills filed by an exporter of the goods are deemed to be an application for refund of the integrated tax paid on the goods exported out of India, as provided in Rule 96A of the CGST Rules, 2017.

• The grievance of the writ applicant is that respondent No.2 has declined the refund of the IGST amount paid on the shipping bills

The principal argument of Ms. Sancheti, the learned counsel appearing for the writ applicant is that the entire controversy is squarely covered by a Division Bench decision of this Court rendered in the case of M/s. Amit Cotton Industries vs. Principal Commissioner of Customs.

Many times, this writ application had to be adjourned as this Court was under the impression that the decision rendered in Amit Cotton Industries (supra) has been challenged by the department before the Supreme Court. However, after due inquiry, a statement is being made by Ms. Sancheti, the learned counsel appearing for the writ applicant that till this date, the said judgement has not been challenged before the Supreme Court. If that be so, then the writ applicants are entitled to the reliefs prayed for in their respective writ applications.

According to Ms. Sancheti, not only the question of law involved, but even the facts of her writ applications are identical to the facts in the case of Awadkrupa Plastomech (supra).

Mr. Ankit Shah, the learned Senior Standing Counsel appearing for the respondents would submit that respondent No.1 shall look into the matter and take an appropriate decision keeping in mind the ratio of the decisions of this Court rendered in the case of M/s. Amit Cotton Industries (supra).

Cases relied upon by:

We are of the view that the controversy raised in this writ application is squarely covered and settled by the decision of this Court in the case of Amit Cotton Industries Vs. Principal Commissioner of Customs reported in [2019] 107 taxman 167 (Gujarat). We are not impressed by such submission because the rates of higher and lower duty drawback remain the same i.e. two percent and no occasion would arise to refund the differential amount as argued by the learned counsel appearing for the revenue. The Circular No.37/2018 Customs, dated 09/10/2018 referred to above by the Competent Authority would apply only to the cases, where the exporters have availed the option to take drawback at the higher rate in place of the IGST refund out of their own volition. In the instant case, the assessee had never availed the option to take drawback at a higher rate in place of the IGST refund. In such circumstances, the Circular is not applicable to the facts of the present case.

Even as per the Condition No.7 of the Notification 131/2016–Cus. (N.T.) dated 31/10/2016, if the rate indicated in columns (4) i.e. higher duty drawback and (6) I.e. lower duty drawback are the same, then it shall necessarily imply that the same pertains only to the Customs component and is available irrespective of whether the exporter has availed of the CENVET facility or not.

The petitioner had exported Rope Making Machine HSN Code 84794000 which attracts the same rate under both the columns (4) & (6) respectively I.e. 2 percent. Thus it is evident that the petitioner has claimed drawback of the customs component only for their exports and there arises no question of denying the refund of IGST. The rationale for not allowing the refund of IGST for those exporters, who claim higher duty drawback is that the higher duty drawback reflects the elements of Customs, Central Excise and Service Tax taken together and since higher duty drawback is already being availed than granting the IGST refund would amount to double benefit as the Central Excise and Service Tax has been subsumed in the GST. In the case of the writ applicant, the drawback rates being the same, it represents only the Customs elements, which did not get subsumed in the GST, and thus, the writ applicant cannot be said to have availed double benefit I.e. of the IGST refund and higher duty drawback.

We dispose of all the writ applications with a direction to respondent No.1 to immediately look into the matters and pass an appropriate order in accordance with law as regards the claim of the IGST refund keeping in mind the ratio of the decisions of this Court rendered in the case of M/s. Amit Cotton Industries (supra) as well as Awadkrupa Plastomech (supra). Let this exercise be completed within a period of six weeks from the date of receipt of the writ of this order.

One copy of this order shall be furnished to Mr. Ankit Shah, the learned Senior Standing Counsel appearing for the respondents for its onward communication. One copy of this order shall also be furnished to Ms. Sancheti, the learned counsel appearing for the writ applicant. It shall be open for Ms. Sancheti, the learned counsel to go before respondent No.1 with the order and request for the refund, as prayed for in the present writ applications.

With the above, all the writ applications stand disposed of. The connected Civil Application also stands disposed of.

Views of Author:
In this order, the court has directed that there is no provision in the law that stipulates withholding of refund where higher duty drawback is claimed. Hence refund to be granted. 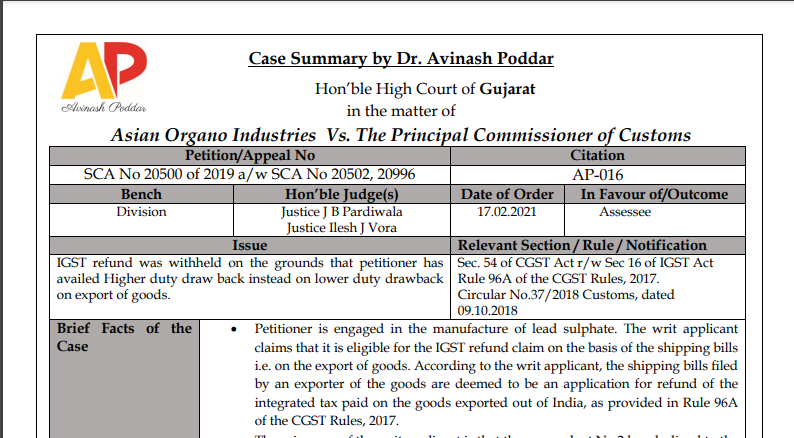 
new gst registration with same pan no. with which already a gst no. cancelled