3. Restriction on Filing of GSTR 1

New Rule 86B for Payment of Output Tax Through Cash Ledger Rule 86B has been inserted vide Notification No- 94/2020- Central Tax dated 22.12.2020 imposing restriction on the use of electronic credit ledger to make the payment of output tax in excess of 99% of the liability. Hence 1% of the total output tax liability to be paid through Electronic Cash Ledger. However the rule not applicable to

1. Value of Supply in month is less than Rs. 50 Lacs. Value of supply shall not include the exempted and exports

2. Proprietor or karta or the managing director or any of its two partners, whole-time Directors, Members of Managing Committee of Associations or Board of Trustees, as the case may be, have paid more than one lakh rupees as income tax under the Income-tax Act, 1961(43 of 1961) in each of the last two financial years

3. Exporter of goods/ services who have received a refund amount of more than one lakh rupees

4. Registered person having supply under inverted duty structure has received a refund amount of more than one lakh rupees in the preceding financial year.

5. Total Output Tax has been paid cumulatively exceed 1% of the output tax through Electronic Cash Ledger

8. a local authority; or

9. Statutory body Power to Remove Restriction for payment of 1% through Cash Ledger- Commissioner or an officer authorised by him has been empowered in this behalf may remove the said restriction after such verifications and such safeguards as he may deem fit. Comments: Constitutional validity of such Rule may be challenged before Court of Law as such restriction on use of electronic credit ledger has not be prescribed either in Section 49 or Section 16 of CGST Act, 2017.

Further such delegation of the power authorizing the restriction on the availment of credit is not permissible u/s 164 of CGST Act, 2017 Credit Availment Subject To Furnishing of Supplier Return Credit of Input Tax for the invoices not furnished is now restricted to 5% of the tax for invoice details furnished effective from 01.01.2021. Earlier the limit was 10%.

Further now merely the invoices are uploaded would not be sufficient to claim the credit of the input tax.

Comments: Meaning of the term “furnished” in this context refers to successful filing of GSTR 1. Constitutional Validity of Rule 36(4) of CGT Rules, 2017 has been already challenged before Hon’ble Calcutta High Court in LGW Industries Limited vs Union and Others restricting the availment of the credit of the input tax subject to furnishing of details of supplies on electronic portal in GSTR 1 Gujarat High Court in M/S Surat Mercantile Association Versus Union Of India- The writ applicants seek to challenge the validity of Sub-rule (4) of the Rule 36 of the GST Rules on the ground that, the same is violative of Article 14 of the Constitution.

Further for the suppliers who have opted to Quarterly Returns Monthly Payment Scheme (QRMP) and uploads the invoices using Invoice Furnishing Facility (IFF), the recipient will be eligible to claim the credit of the input tax based on such invoice details uploaded. Restriction on Furnishing of GSTR 1 if GSTR 3B not filed Amendment to Rule 59 of CGST Rules 2017 Assessee furnishing Monthly GSTR 1 Sub-rule 5 has been inserted after Rule 59(4) of CGST Rules, 2017- Restriction has been imposed on filing of GSTR 1 if GSTR 3B has not been filed for preceding 2 months.

Assessee furnishing Quarterly GSTR 1 Sub-rule 5 has been inserted after Rule 59(4) of CGST Rules, 2017- Restriction has been imposed on filing of GSTR 1 on quarterly basis if GSTR 3B has not been filed for preceding months.

Assessee restricted to avail the credit in excess of 99% of the output tax Sub-rule 5 has been inserted after Rule 59(4) of CGST Rules, 2017- Restriction has been imposed on the person filing GSTR 1, if GSTR 3B has not been filed for preceding tax period. Such restriction is applicable to persons who are restricted to avail the credit of input tax from electronic credit ledger exceeding 99% of output tax.

(e) avails input tax credit in violation of the provisions of section 16 of the Act or the rules made thereunder; or

(g) violates the provision of rule 86B- Excess availament of credit of input tax exceeding 99% of output tax for applicable assessees.

Comments: Principal of Natural Justice is the backbone of any Adjudication Proceedings. Reasons to believe would be sufficient for the proper officer to initiate an action of suspension of registration.

Significant Differences- GSTR 3B with GSTR 1, 2A, 2B Sub-rule 2A has been inserted after Rule 21A(2) of CGST Rules, 2017 If there is significant differences or anomalies indicating contravention of the provisions of the act on comparison of supplies in the following cases shall result in the suspension of the registration

1. Outward Supplies- Comparison of supplies reported in GSTR 3B and GSTR 1

2. Input Tax- Comparison of credit of the input tax claimed in GSTR 3B and GSTR 2A/2B

Reduction in Validity of E Way Bill Amendment in Rule 138(10) of CGST Rules, 2017 has been done resulting in reducing the validity of e-way bills during the movement of the goods effective from 01.01.2021- 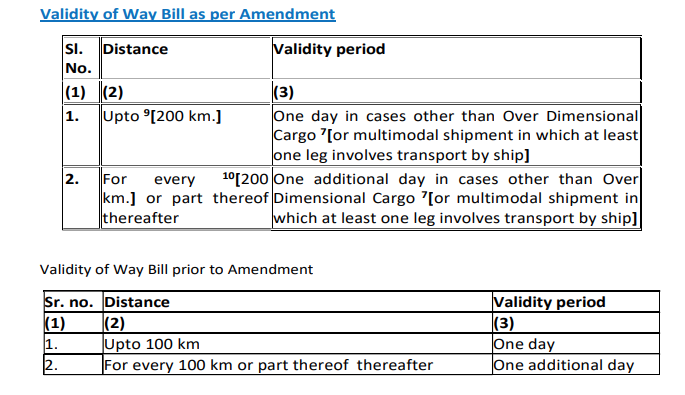 Validity of Way Bill as per Amendment-

Restriction of issue of E-Way Bill Vide Notification 94/2020- Central Tax dated 22.12.2020, additional as wells as amendments to grounds which has been prescribed for the suspension of generation of E-Way Bill

Persons shall not be able to generate E-Way bill if the registered person has not furnished the statement of outward supplies for any two months or quarters, as the case may be.

Additional Ground on Restriction for Generation of E-Way Bill

The registered person whose registration has been suspended under sub-rule 1, 2, 2A of Rule 21A of CGT Rules, 2017 Above analysis is based on the purely personal understanding of the author. Interpretation of the amendments may differ from person to person.