The writ has been filed with a pray to quash and set aside summons issued to petitioner for claiming the credit on basis of fake invoices. Here, petitioner 1 is a director in a company which is petitioner 2 in this case. Fraudulent ITC has been claimed to the tune of Rs 328 crores by the petitioner and its sister/related concerns, of which Rs. 40.53 crores relates to petitioner 2. Summon has been issued u/s 70 of the CGST Act, 2017, and the department is also in favor of arresting petitioner u/s 69 of the CGST Act. Counsel for petitioner claimed that arrest cannot be done until the proper amount of tax is calculated u/s 73 and 74. He also claimed that petitioner 1 was residing in the USA and has come to India after the demise of his father in 2017.

No matter petitioner 1 was residing in the USA but from the documents, it is clear that he is director of the company (petitioner 2) since 2012 and has been receiving remuneration to the tune of Rs 60 lacs p.a.

None of the cases of other high courts referred are relevant in this case.

Moreover, where section 132(1) has been invoked, there is no condition to calculate tax amount u/s 73 or 74 of CGST for the purpose of arrest.

The department has the right to proceed u/s 69 and 70 of the act. Stay application also disposed of. 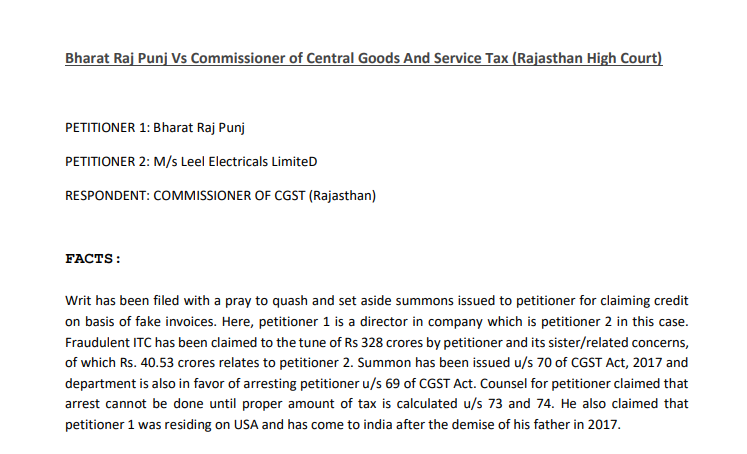