Whether interest can be recovered for delayed payment of tax by attaching the bank account of the assessee without adjudicating u/s 73 or 74 of CGST Act, 2017

MAHADEO CONSTRUCTION CO. AT CHATTARPUR, PALAMAU THROUGH ITS PARTNER ANIL KUMAR SINGH Vs THE UNION OF INDIA

RESPONDENT: THE UNION OF INDIA

The due date for filing return for the month of February 2018 and March 2018 as shown on the GSTIN portal got extended up to 31st March 2019. Petitioner contended to have filed the return within the due date. Notice has been issued by the revenue demanding interest of Rs 19,59,721/- for delayed payment of tax. Respondent further exercised the power u/s 79 of the CGST Act by initiating proceedings of recovery of interest by issuing notice to petitioner’s banker.

So there are two issues involved:

1. Whether interest liability u/s 50 of CGST Act can be determined without initiating adjudication process either u/s 73 or 74 in the event of an assessee raising dispute towards the liability of interest.

2. Whether recovery proceedings u/s 79 of the CGST Act can be initiated for recovery of interest u/s 50 of the said Act without initiation and completion of the adjudication proceedings under the Act?

Learned counsel for the petitioner submitted that since the return has been filed within the due date mentioned on the portal, there is no delay in payment of tax and thereby no liability to pay any interest. Also, notice issued by the respondent is not sustainable without initiating adjudicating proceedings u/s 73 or 74 of the CGST Act. Since the amount is not admitted by the assessee, the same needs to be determined through a detailed adjudication process u/s 73 of the CGST Act.

It has been further submitted that recovery proceedings u/s 79 of the CGST Act can be initiated only when “any amount payable by a person to the Government under the provisions of the Act and the Rules are not paid”. These words “any amount payable” is to be interpreted in the context in which it has been used and the amount payable (unless admitted) can only be determined by initiating adjudication process as provided under Section 73 or 74 of the CGST Act. Since the petitioner has not admitted the liability to pay interest, it is to be classified as the amount payable, for which necessary adjudication process is required. Therefore, the recovery proceeding initiated by department u/s 79 is not sustainable unless adjudicated.

Learned counsel for the respondent submitted that due date was extended to file GSTR 3B w.r.t waiver of late fees in compliance with Notification No. 76/2018-Central Tax dated 31st December 2018 and there no extension in due date for payment of taxes. The ground of dispute is not the late filing of GSTR 3B but delayed payment of tax beyond the time prescribed u/s 39(1) read with section 39(7) of the CGST Act. The liability to pay interest becomes automatically due where there is a delay in payment of tax for which no separate adjudication is required.

For justifying the action of initiation of recovery proceedings u/s 79, learned counsel contended that since the liability to pay interest is automatic for delayed payment of tax, the same gets covered under the words “amount is payable” meaning thereby proceeding u/s 79 has been rightly invoked.

Interest on delayed payment of tax

(1) Every person who is liable to pay tax in accordance with the provisions of this Act or the rules made thereunder, but fails to pay the tax or any part thereof to the Government within the period prescribed, shall for the period for which the tax or any part thereof remains unpaid, pay, on his own, interest at such rate, not exceeding eighteen percent, as may be notified by the Government on the recommendations of the Council.

(2) The interest under sub-section (1) shall be calculated, in such manner as may be prescribed, from the day succeeding the day on which such tax was due to be paid.

On reading the above provision, the liability of interest u/s 50 is not automatic, but the same is required to be calculated and intimated to the assessee. Reference has been given to The Assistant Commissioner of CGST & Central Excise and others Vs. Daejung Moparts Pvt. Ltd. and ors wherein it was held that though the liability of interest is automatic the quantification shall have to be made after considering objections of the assessee. So if an assessee disputes the calculation or even the leviability of interest, then the only option left with the officer is to initiate proceedings u/s 73 or 74.

The next issue is whether proceedings u/s 79 can be initiated without adjudicating? Section 79 of the CGST Act empowers the authorities to initiate proceedings for recovery of tax where “any amount payable by a person to the Government under any of the provisions of the Act and Rules made thereunder is not paid”. Since, in the above para, it is already held that though interest liability is automatic, the same is required to be adjudicated where an assessee disputes the computation or the very leviability. So till the adjudication is completed, the amount of interest cannot be termed as an amount payable under the Act or the Rules. Thus, without the initiation of any adjudication proceedings, no recovery proceeding under Section 79 of the Act can be initiated for recovery of the interest amount.

Where the amount of interest charged u/s 50 is disputed by the assessee, the same needs to be adjudicated. Also, no recovery proceedings can be initiated u/s 79 for recovery of such interest unless the amount becomes payable as per the provisions of sections and rules. 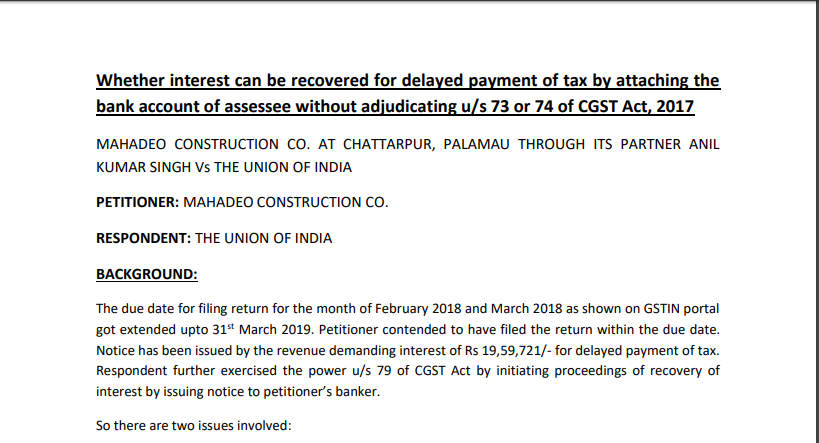 Tagged with: 2017 Whether interest can be recovered for delayed payment of tax by attaching the bank account of assessee without adjudicating u/s 73 or 74 of CGST Act
Discuss Now Opinions & information presented by ConsultEase Members are their own.

Last date for April's return for some taxpayers