Question for Consideration before Hon’ble Court

Whether Section 13(8)(b) of IGST Act, 2017 creating the deeming fiction of treating the place of supply as the location of the supplier of the services thereby levying the CGST and SGST for the Intermediary Services is constitutionally valid and whether the Parliament has the Legal Competence?

Petitioner undertakes activities of marketing and promotion of goods sold by its overseas customers in India.

Legal Provisions of Place of Supply for Intermediary

While sub-section (2) generally provides that the place of supply of services shall be the location of the recipient of services, exceptions are carved out in sub-sections (3) to (13).

As per sub-section (8), the place of supply of the services mentioned therein shall be the location of the supplier of services which is intermediary services in terms of clause (b).

Impact of Legal Provision on Petitioner

2. Court has to see whether there is legislative competence to enact the statute or not and whether the impugned provision is violative of any of the fundamental rights enshrined in Part III of the Constitution or not

3. No statute can be struck down as arbitrary unless it is unconstitutional. Greater latitude vests with the Parliament in taxing statutes and motive is not a relevant factor

4. Erstwhile service tax regime, the Place of Provision of Service Rules, 2012 contained a similar provision with effect from 01.10.2014.

5. Petitioner had been paying service tax on the service rendered to the overseas customer and therefore it is not open to the petitioner to make the impugned challenge now.

6. The central government considered several representations and after examining the issue in detail declared that with effect from 01.10.2014 the place of supply for all intermediaries (goods and services) would be the location of the intermediary.

Petitioner Reply The challenge to section 13(8)(b) of the IGST Act that it is ultra vires Article 286 read with Article 246A and Article 269A of the Constitution was neither canvassed before nor considered by the Gujarat High Court. There is no discussion on Articles 14 and 19(1)(g) as well.

Petitioner Reply levy of GST on the export of services by intermediary has created an exodus of intermediaries to places like Singapore, Dubai, Hong Kong, etc. thereby depriving the central government of not just GST but also income tax, valuable foreign exchange, and employment to thousands of people. Such a levy of GST is rather against the Make in India program as well as against the age-old policy of the Government of India to encourage the export of goods and services.

1. Para 54- Artificial Deeming Provision of Section 13(8)(b) of IGST Act, 2017 is contrary to the scheme of CGST Act, and IGST Act being beyond the charging provisions of the relevant Act-section 9 of the CGST Act which is the charging section we find that it provides for levy and collection of CGST on all intra-state supplies of goods or services and section 5 of the IGST Act which is the charging section provides for levy of IGST on all inter-state supplies of goods or services

2. Para 45 Parliamentary Standing Committee report No.139- The Committee recommended that the government may also cause the amendment to section 13(8) of the IGST Act to exclude intermediary services and make it subject to the default section 13(2) so that the benefit of export of services would be available.

3. Para 53.2 Article 245- Article 245(1) empowers Parliament to enact a law for the whole or any part of the territory of India. The provocation for the law must be found within India itself. Such a law may have an extra-territorial operation in order to subserve the object and that object must be related to something in India. It is inconceivable that a law should be made by Parliament in India which has no relationship with anything in India.

4. Para 56 Article 245-The extra-territorial effect given by way of section 13(8)(b) of the IGST Act has no real connection or nexus with the taxing regime in India introduced by the GST system;

6. Para 48.1 Article 286-There is an express bar under clause (1) of Article 286 that no law of a state shall impose or authorize the imposition of a tax on the supply of goods or services or both where such supply takes place in the course of import into or export out of the territory of India.

8. Para 60- Decision of one High Court declaring constitutionality of an all India statute would foreclose adjudication by other High Courts which would neither be in the interest of the administration of justice nor in the public interest.

9. Para 61 Presumption in favour of the constitutionality of a statute-Each case would have to be decided on the facts of that case. There can be no straightjacket formula in applying the above principles. It is also a settled proposition that a statute must pass the test of legislative competence; it must also pass the test of constitutionality in the sense that it cannot violate any provisions of the Constitution.

10. Para 63 Make in India Program-Make in India program by encouraging foreign investment can be no answer to challenge to the constitutionality of a parliamentary statute. Besides such a statement has been made de-hors any supporting statistics and analysis.

2. Para 65- We have no hesitation in holding that section 13(8)(b) of the Integrated Goods and Services Tax Act, 2017 is ultra vires the said Act besides being unconstitutional. 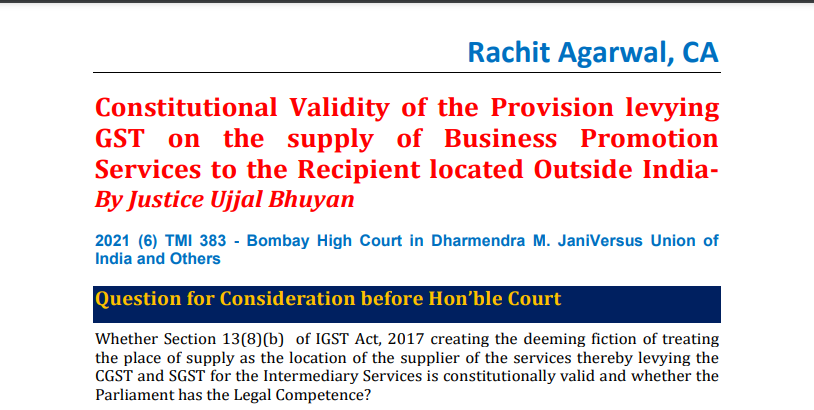 
MAKE INVOICE IN CASE OF LUT