2. Doubts have arisen as in certain cases a view has been taken in the field that this entry would not cover “laterals of sprinklers” and “sprinklers irrigation system”, while laterals of drip irrigations are covered by this entry. 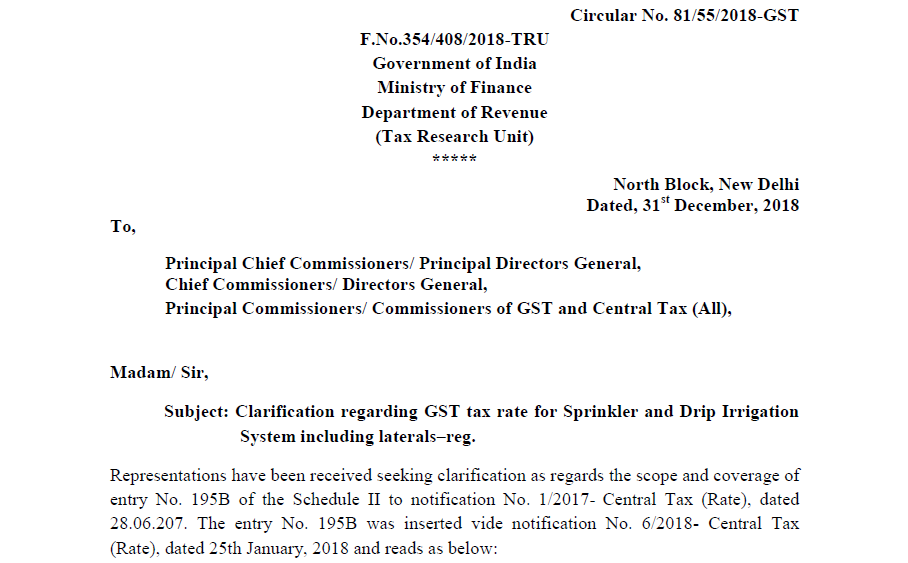 3. The matter has been examined. Initially, with effect from 1.7.2017, all goods falling under HS 8424, namely, Mechanical appliances (whether or not hand-operated) for projecting, dispersing or spraying liquids or powders; spray guns and similar appliances; steam or sand blasting machines and similar jet projecting machines (other than fire extinguishers, whether or not charged), were placed under 18% slab. Subsequently, on the recommendation of the GST Council, the item namely, ‘Nozzles for drip irrigation equipment or nozzles for sprinkler was placed under 12% GST slab (Entry No. ‘195A’ with effect from 22.09.2017). Upon revisiting the issue of GST rate on micro irrigation including drip irrigation system, including laterals the GST Council recommended 12% GST rate on micro
irrigation system, namely, sprinklers, drip irrigation system, including laterals. Accordingly,
the said entry 195B was inserted in the notification No. 1/2017- Central Tax (Rate).

4. Therefore, the term “sprinklers”, in the said entry 195B, covers sprinkler irrigationsystem. Accordingly, sprinkler system consisting of nozzles, lateral and other components would attract 12% GST rate.

5. Difficulty, if any, may be brought to the notice of the Board immediately. Hindi version shall follow.

Measure to facilitate trade during the lockdown period - section 143AA of the Customs Act, 1962

Measure to facilitate trade during the lockdown period - section 143AA of the Customs Act, 1962