M/s. Gujarat Narmada Valley Fertilizers & Chemicals Ltd.( hereinafter referred to as “GNFC” or “lessor” or “Applicant”) has entered into a lease agreement dated 01.12.2015 with the President of India acting through the Commissioner of Central Excise, Audit-I, Ahmedabad (hereinafter called the “lessee”) to provide along with the building for rent the interior infrastructure like partitions, cabins, work stations, electrical air conditioners, fire safety systems, tables, chairs, etc. at agreed monthly rent.

The applicant submitted that the CGST department was paying service tax on a total consideration of rent including that on electricity charges to the applicant up to 30.06.2017. However, the CGST department has stopped paying GST component on electricity and incidental charges from 01.07.2017 under the pretext that GST is not applicable in terms of Rule 33 of the CGST Rules, 2017 on such electricity charges even though such charges are clearly incidental expenses in respect of the supply of service of renting of immovable property. They are charging GST on electricity charges, recovered as a part of total consideration for renting of immovable property and recovering the same from other tenants, and is also paying GST to respective governments.

The agreement is in respect of letting out of the space on rent and clause 3 above clearly indicates that the value of such supply of renting out the premises has been fixed at Rs. 56/- per sq. ft. and the total rent payable in respect of the total area of 3453.3 sq. Mtrs. equivalent to 37158 Sq. ft has been agreed upon as Rs. 20,80,848/-. The clause further indicates that the agreed-upon rent is for the space of 37158 Sq. ft along with all internal infrastructure. This fact makes it expressly clear that the value of the supply of renting of premises has been fixed at Rs. 20,80,848/- which includes the internal infrastructure. In view of such an agreement, it can be said that the amount charged towards internal infrastructure (if any separately charged) would be includible by virtue of the clause ‘any amount charged for anything done by the supplier in respect of the supply of goods or services or both’. Had a similar clause been incorporated in the agreement regarding ‘electricity charges’, the same would have been includible. However, there is no such clause regarding electricity charges. Thus, the tone and tenor of the agreement clearly demonstrates that the value for offering the space on rent has been fixed at Rs. 20,80,848/-. The agreement does not make any provision for the supplier to make any incidental expense or charge any other amount in respect of such supply of space on rent. Thus, the value for the purpose of renting of immovable property, in the instant case, would be the amount agreed upon for the act of renting of such property.

Answer: The facts of the present case infer that the electricity charges collected by the applicant are not covered under the provisions of Sec. 15(2)(c) of the CGST Act, 2017 and as such would not be includible in the value of supply.

Answer: The electricity charges collected by the landlord from the Govt. of India at actuals based on the reading of the sub-meters is covered under the amount recovered as a pure agent in terms of the provisions of Rule 33 of the CGST Rules, 2017 in respect of the lessor viz. Govt. of India. 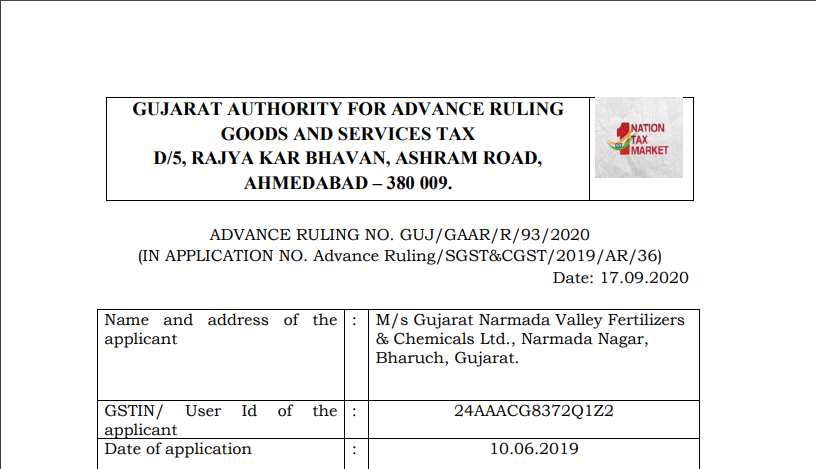 Gujarat AAR in the case of M/s Balkrishna Industries

Gujarat AAR in the case of M/s Vishv Enterprise

Gujarat AAR in the case of M/s V 2 Realty

Gujarat AAR in the case of Shree Dipesh Anilkumar Naik


Service from unregistered person to the company