The Revenue urges identical questions of law in all the afore-noted appeals with the only difference being the figures relating to the additions made under Section 68 read with Section 115BBE of the Act. Accordingly, the same are being decided by way of this common order.

On a perusal of the record, it is easily discernible that in the instant case, the AO had proceeded predominantly on the basis of the analysis of the financials of M/s Gold Line International Finvest Limited. His conclusion and findings against the Respondent are chiefly on the strength of the astounding 4849.2% jump in share prices of the aforesaid company within a span of two years, which is not supported by the financials. On an analysis of the data obtained from the websites, the AO observes that the quantum leap in the share price is not justified; the trade pattern of the aforesaid company did not move along with the Sensex, and the financials of the company did not show any reason for the extraordinary performance of its stock. We have nothing adverse to comment on the above analysis but are concerned with the axiomatic conclusion drawn by the AO that the Respondent had entered into an agreement to convert unaccounted money by claiming fictitious LTCG, which is exempt under Section 10(38), in a preplanned manner to evade taxes. The AO extensively relied upon the search and survey operations conducted by the Investigation Wing of the Income Tax Department in Kolkata, Delhi, Mumbai and Ahmedabad on penny stocks, which sets out the modus operandi adopted in the business of providing entries of bogus LTCG. However, the reliance placed on the report, without further corroboration on the basis of cogent material, does not justify his conclusion that the transaction is bogus, sham, and nothing other than a racket of accommodation entries. We do notice that the AO made an attempt to delve into the question of infusion of Respondent’s unaccounted money, but he did not dig deeper. Notices issued under Sections 133(6)/131 of the Act were issued to M/s Gold Line International Finvest Limited, but nothing emerged from this effort. The payment for the shares in question was made by Sh. Salasar Trading Company. Notice was issued to this entity as well, but when the notices were returned unserved, the AO did not take the matter any further. He thereafter simply proceeded on the basis of the financials of the company to come to the conclusion that the transactions were accommodation entries, and thus, fictitious. The conclusion is drawn by the AO, that there was an agreement to convert unaccounted money by taking fictitious LTCG in a pre-planned manner, is therefore entirely unsupported by any material on record. This finding is thus purely an assumption based on conjecture made by the AO. This flawed approach forms the reason for the learned ITAT to interfere with the findings of the lower tax authorities. The learned ITAT after considering the entire conspectus of the case and the evidence brought on record held that the Respondent had successfully discharged the initial onus cast upon it under the provisions of Section 68 of the Act. It is recorded that “There is no dispute that the shares of the two companies were purchased online, the payments have been made through banking channel, and the shares were dematerialized and the sales have been routed from a de-mat account and the consideration has been received through banking channels.” The above-noted factors, including the deficient inquiry conducted by the AO and the lack of any independent source or evidence to show that there was an agreement between the Respondent and any other party, prevailed upon the ITAT to take a different view. Before us, Mr. Hossain has not been able to point out any evidence whatsoever to allege that money changed hands between the Respondent and the broker or any other person, or further that some person provided the entry to convert unaccounted money for getting the benefit of LTCG, as alleged. In the absence of any such material that could support the case put forth by the Appellant, the additions cannot be sustained.

The learned ITAT, being the last fact-finding authority, on the basis of the evidence brought on record, has rightly come to the conclusion that the lower tax authorities are not able to sustain the addition without any cogent material on record. We thus find no perversity in the Impugned Order.

Accordingly, the present appeals are dismissed. 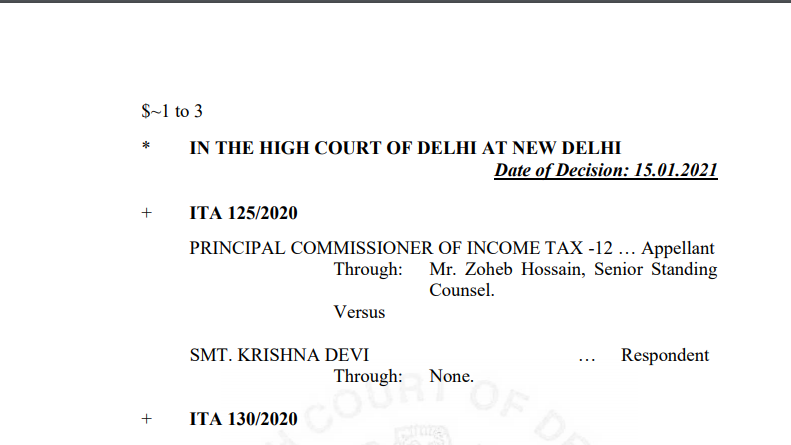