The Commissioner of Customs

The facts of the case, in brief, are that the appellant M/s Aestrik Techno Signs imported goods through FedEx Airway Bill No. 808815275160 declaring them as “small printer part, big printer part, and data cable” and the quantity as 22 and declared assessable value as Rs. 15,141/- and filed Bill of entry No. 408577. The Customs authorities examined the goods in the presence of two independent witnesses. Reckoning the contemporaneous import data of the goods that were actually imported, the total value of imported goods was re-determined as Rs. 9,21,951/- and the customs duty leviable thereon was assessed as Rs. 1,60,327/-. The importer submitted a letter dated 21 July 2016 accepting the value and duty as assessed by the customs and further stated that did not want a show-cause notice or a personal hearing in the matter. Further, they requested to release their consignment on nominal fine and penalty and stated that they are ready to bear the fine and penalty. Based on this letter, the Additional Commissioner of Customs passed an order dated 11 May 2016 as follows:-

(iv) The redemption fine and penalty shall be in addition to the Customs duty leviable on the goods along with applicable interest”.

The facts are not in dispute. The goods were imported declaring a certain value which was doubted by the officers and so the goods were opened and examined. After opening and examining and comparing the goods with the value of corresponding goods in contemporaneous imports the officer founds that the goods were misdeclared in terms of value. Therefore, he sought to reassess the duty. Section 17 (5) of the Customs Act requires the officer to pass a speaking order in case of reassessment unless the importer accepts the reassessment in writing. In this case, the importer accepted the reassessment in writing. Further, he also gave in writing that he does not want a show-cause notice or a personal hearing. He further undertook to pay the fine and penalty. The extent of undervaluation found by the officers was substantial. The declared value was only Rs. 15,141/- whereas the actual value was calculated to be Rs. 9,21,951/-. The duty leviable was correspondingly increased from Rs. 2,634/- as per the declaration to Rs. 1,60,327/-. Since the declaration by the importer did not correspond to the actual value of the goods as determined they were confiscated under Section 111 (m) of the Customs Act and were allowed to be redeemed under Section 125 of the Customs Act on payment of a fine of Rs. 2 lakhs. A penalty of Rs. 90,000/- was also imposed on the appellant under Section 112 (a) read with Section 114AA of the Customs Act.

The Order of the Tribunal:

Coming to the quantum of redemption fine imposed upon the appellant under Section 125, we find that the second proviso to Section 125 places an upper limit of fine that it should not exceed the market price of the goods confiscated. In this case, the assessable value of the goods which are confiscated is Rs. 9,21,951/- and the penalty imposed was only Rs. 2 lakhs, which was further reduced to Rs. 1 lakh by the First Appellate Authority. The amount of fine imposed is, therefore, only about 11% of the assessable value which given the facts and circumstances of the case is just and fair. The amount of penalty imposed under Section 112 (a) upon the appellant cannot exceed 10% of the duty sought to be evaded or Rs. 5,000/- whichever is higher. The penalty imposable under Section 114AA can be up to five times the value of the goods (Rs. 9,21,951/-). In the present case, the actual duty was re-determined as Rs. 1,60,327/-, whereas the duty which would have been paid as per the assessee declaration was only Rs. 2,634/-. Thus, the duty sought to be evaded was over Rs. 1,50,000/- and the penalty imposed under Section 112 (a) read with Section 114AA was only Rs. 90,000/-, which was further reduced to Rs. 40,000/- by First Appellate Authority. In our view, this is a fair amount of penalty. In view of the above, we find that the impugned order is correct and calls for no interference and needs to be upheld and we do so.

The impugned order is upheld and the appeal is rejected. 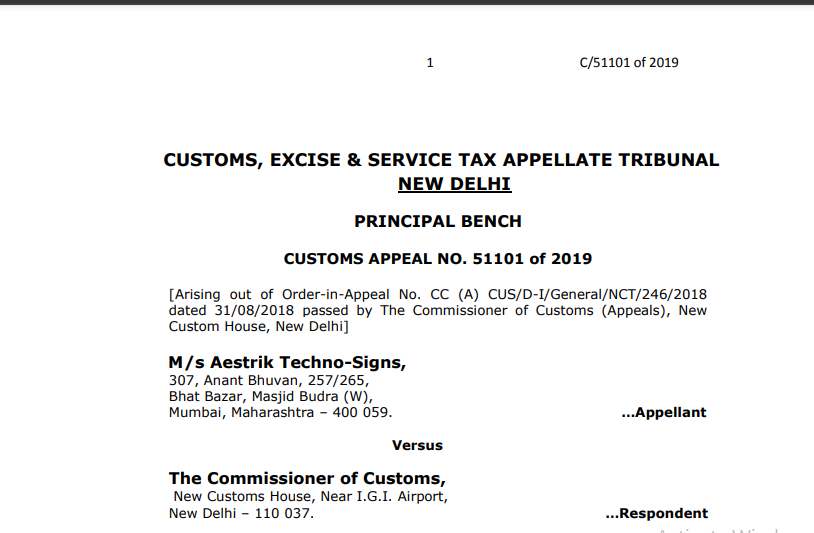 Tagged with: CESTAT Delhi in the case of M/s Aestrik Techno-Signs Versus The Commissioner of Customs
Discuss Now Opinions & information presented by ConsultEase Members are their own.

CESTAT Chennai in the case of M/s.S.T. Enterprises Versus Commissioner of Customs

Refund of services used in export of Goods

Supreme Court in the case of Union of India Versus M/s V.V.F Limited

Exporters are entitled to AIR Drawback though the processing is carried out at 100% EOU: Madras HC