CESTAT Chennai in the case of M/s.S.T. Enterprises Versus Commissioner of Customs

Brief facts of the case are that M/s.ST Enterprises and M/s. Ayush Business Overseas (appellants herein) imported betel nuts and filed two warehousing Bills of Entry both dated 18.11.2020 for warehousing the same. The goods are stored at a unit of FTZ on behalf of the appellants. Appellants had classified the goods under CTH 21069030 and submitted a write-up given by their supplier/exporter, M/s.Nadaraj International Company Ltd., Yangon, Myanmar explaining various stages of the process undergone by the imported goods. The goods were examined by the officers of FTZ and they were of the view that since the imported betelnut (Areca-nuts) are “whole” nuts and are classifiable under CTH 08028010, it is a prohibited item for import as the CIF value of the goods is lesser than Rs.251/- per kg.

On reasonable doubt, samples were drawn and sent for examination to the Chemical Examiner, Customs Laboratory, Customs House, Chennai. The Chemical Examiner stated that it could not be ascertained whether the betel nuts are boiled/roasted. It was also stated that it is free of cardamom and added food starch. On the view that various processes as claimed by the appellants in their write up having not been undertaken to make the betel nut “product of betel nut‟ or “preparations containing betel nut‟, the assessing officer held that the impugned goods do not merit classification under CTH 21069030 as claimed by the appellant. The assessing authority passed speaking orders and in both cases, he rejected the classification claimed by the appellants and held the goods to be classified under 08028010.

Observations & Order of the Tribunal:

From the above, we have to say that since the import goods are “betel nuts whole‟, would merit classification under Chapter 8 and specifically under Chapter 08028010 as classified by the department. We cannot refrain from stating that the Commissioner (Appeals) has made a detailed discussion of facts and the law and arrived at the correct classification.

For the foregoing reasons, both the appeals are dismissed. 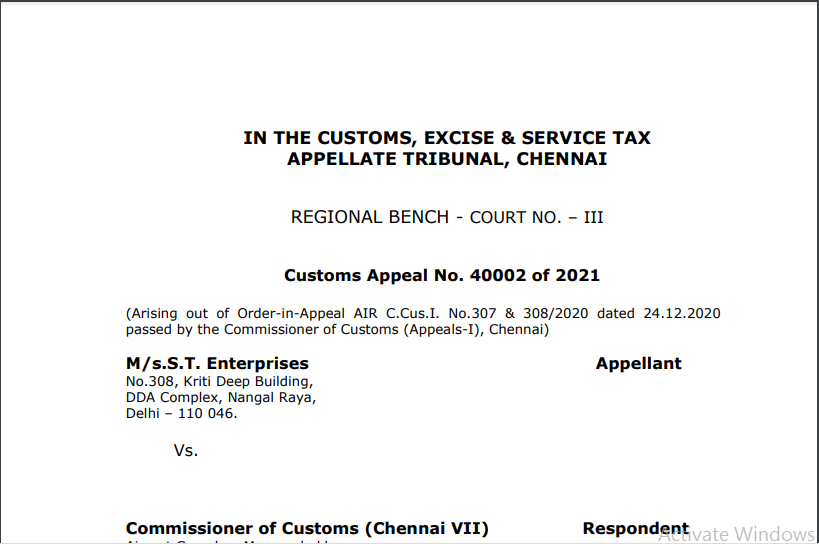 Tagged with: CESTAT Chennai in the case of M/s.S.T. Enterprises Versus Commissioner of Customs
Discuss Now Opinions & information presented by ConsultEase Members are their own.

Refund of services used in export of Goods

Supreme Court in the case of Union of India Versus M/s V.V.F Limited

Exporters are entitled to AIR Drawback though the processing is carried out at 100% EOU: Madras HC