Kind reference is drawn to the press note dated 31.12.2020 (copy enclosed) issued by CBIC on the new RoDTEP scheme being operationalized from 01.01.2021. Necessary changes in the System have also been made to accept and process RoDTEP claims. Below is a detailed explanation of the provisions enabled in the System in relation to the new scheme:

I. Claim in the Shipping Bill:

a. W.e.f. 01.01.2021, it is mandatory for the exporters to indicate in their Shipping Bill whether or not they intend to claim RoDTEP on the export items. This claim is mandatory for the items (RITC codes) notified under the new scheme. Since the final list of RITC codes eligible for the RoDTEP scheme and the corresponding rates are yet to be notified by the Government, this declaration has been made mandatory for all items in the Shipping Bill starting 01.01.2021.

b. Unlike Drawback, there is no separate serial numbers based on a schedule for claiming RoDTEP. RoDTEP rates will be notified as per the RITC Code and therefore, there will be no need to declare any separate code or schedule serial number for RoDTEP.

c. The exporter will have to make the following declarations is the SW_INFO_TYPE Table of the Shipping Bill for each item:

INFO UQC = UQC for the Quantity indicated in INFO_MSR

Additionally, for every item where RODTEPY is claimed in INFO CODE, a declaration has to be submitted in the Statement Table of the Shipping Bill as below.

Submission of the above statement code for RoDTEP availed items would indicate that the exporter has made the necessary declaration as enclosed in Annexure while claiming RoDTEP benefit.

d. It may be noted that if RODTEPY is not specifically claimed in the Shipping Bill, no RoDTEP would accrue to the exporter. Even though the items and rates are not notified by the Government for RoDTEP yet, the exporters must indicate their intent for the claim at the time of the Shipping Bill filing itself. Once the rates are notified, the System would automatically calculate the RoDTEP amounts for all the items where RODTEPY was claimed. No changes in the claim will be allowed after the filing of the EGM.

e. There are some checks built in the System to disallow RoDTEP benefit where the benefit of certain other schemes like Advance Authorization, EOU, Jobbing, etc. have been availed. While some checks have been built-in within the System at the time of filing the Shipping Bill, it is assumed that if the exporter (or the authorized Customs Broker) has submitted the statement as mentioned in para 2(b) with the Shipping Bill, the claim to RoDTEP has been made with the undertaking that no undue benefit would be availed.

II. Processing of the Claim:

a. Based on the declarations as per Para I above, System will be processed the eligible RoDTEP.

c. Once the Shipping Bill is processed for DBK and/or RoDTEP either by the officer or as per facilitation by RMS, it will move to the respective scroll queues. In case a suspension is placed on any exporter/Shipping Bill for Drawback, the same will also be applicable for the purpose of scrolling out of RoDTEP benefits.

a. Options have been made available in the System for officers to generate RoDTEP scrolls. However, till the final rates are notified by the Government, these options will remain disabled in System.

b. Once the scroll is generated, the respective amounts would be available with the exporter as credits on the ICEGATE portal.

IV. Claiming of Credits and Generation of Credit Scrips:

a. Once the RoDTEP scroll is generated, the credits allowed will be available within their ICEGATE login of the exporter to claim and covert into credit scrip. In case the exporters have not registered on ICEGATE already with their digital signatures, they may refer to this advisory (v1.2_Advisory_Registration_APPROVED.pdf (icegate website)) and complete registration in order to avail of the benefits of RoDTEP.

b. The exporter will be able to club the credits allowed for any number of Shipping Bills at a port and generate a credit scrip for the same on the ICEGATE portal. Scrips once generated will reflect in the exporter’s ledger and will be available for utilization in paying eligible duties during imports or for transfer to any other entity having IEC and valid ICEGATE registration. A detailed advisory for the benefit of the exporter on the scrip generation, ledger maintenance, and transfer facilities will be published soon on ICEGATE. These facilities will be made available once the final RoDTEP rates are notified and scroll generation is enabled.

V. Utilization of Scrips in Imports:

a. These scrips can be used for the payment of import duties as would be notified by CBIC.

b. The owner of the scrip (either the original exporter beneficiary or any other IEC to whom the scrip was transferred on ICEGATE portal) will be able to use the scrip in the Bills of Entry the same way as any other duty credit scrips issued by DGFT, by giving the details in the license table of the Bill of Entry. The scheme code to be used for these scrips would be “RD” along with the applicable Notification Number.

c. An option to suspend any RoDTEP scrip will also be made available with the Customs officer once the scroll generation is enabled. If a scrip is under suspension, its utilization or transfer will not be allowed by System.

“I/We, in regard to my/our claim under RoDTEP scheme made in this Shipping Bill or Bill of Export, hereby declare that:

1. I/ We undertake to abide by the provisions, including conditions, restrictions, exclusions, and time-limits as provided under the RoDTEP scheme, and relevant notifications, regulations, etc., as amended from time to time.

2. Any claim made in this shipping bill or bill of export is not with respect to any duties or taxes or levies that are exempted or remitted or credited under any other mechanism outside RoDTEP.

3. I/We undertake to preserve and make available relevant documents relating to the exported goods for the purposes of audit in the manner and for the time period prescribed in the Customs Audit Regulations, 2018.” 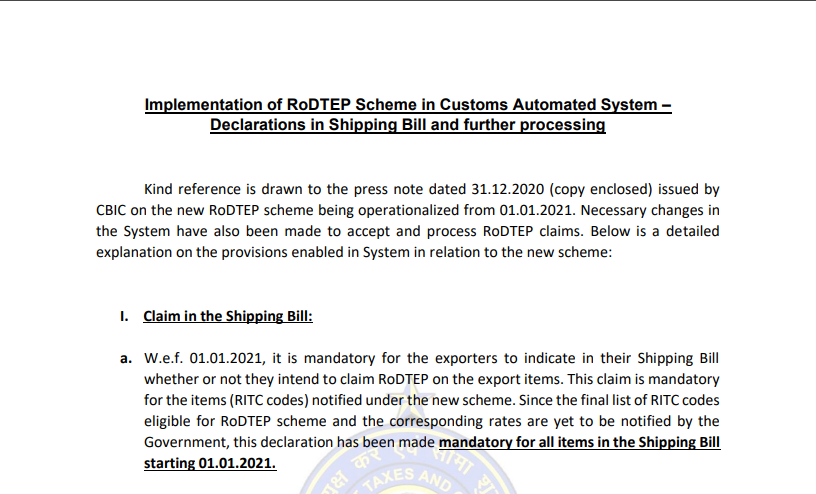 
GST on export of services